All Articles Recording & Production
A Music Producer’s Guide to Modeled Instruments
Joe Albano on Mon, February 1st 0 comments
Not sure on the difference between a sampled instrument and a modeled one? Don't know what the benefits of modeling offer software instruments in your DAW? Joe Albano reveals all this and more.

Electronic instruments have evolved quite a bit over the years, from vintage electro-mechanical keyboards like the Rhodes and B3, to classic analog synths from Moog and ARP, to digital synths like the DX7, and eventually to samplers like those from Emu and Akai, among many, many others. Along the way instruments moved inside the box, where today’s virtual synths and samplers offer capabilities their hardware predecessors could only dream about.

The latest development in virtual instrument (V.I.) technology is modeling. As computer power increased exponentially over the last 30 years or so, modeling instruments came of age, and that technology is now firmly established in the panoply of modern V. I.s.

Unlike Sampling, which relies on recordings of notes from real (physical) instruments, modeling technology utilizes raw computer power to emulate a physical instrument from scratch. Algorithms (formulas) simulate the physical elements that produce and modify the sound, from the vibrating source to the method(s) used to instantiate notes to the resonant cavities that lend a distinct tonality to every physical instrument. This method of sound generation offers the ability to more effectively simulate the dynamic response and subtle performance nuances of a physical instrument, whether emulating the sound and playability of a real instrument or creating an imaginary one and imbuing it with distinctly physical characteristics.

Modeling tech has been around for many years. Even when it was still severely limited in application by the relative lack of CPU power, research into the nature of vibrating objects and the physical components of instruments prepared sound designers for the eventual use of that knowledge in modern modeled instruments.

As computer power started to reach the point where modeling could have practical commercial applications, the technology was initially used to emulate electronic audio hardware processors, which—as closed systems—presented less demanding requirements. Component modeling analyzed the individual circuit components and combined signal path of electronic devices, recreating the sound and response virtually, and models of analog hardware processors like tube compressors & amplifiers, and transformer-based preamps & EQs were able to bring the distinctive character of those classic pieces of gear into the digital world—probably half the plug-ins out there nowadays are models of vintage/classic analog gear.

Modeling analog (or analog-style) instruments proved more difficult. The dynamic interaction of the player and the effect of the physical space (the room) on the sound generation and tonality of a physical instrument make for a more demanding set of algorithms. Some of the earliest efforts at modeling familiar acoustic instruments like piano, while impressive, frequently suffered from a telltale lack of three-dimensionality. Initial success came with models of electro-mechanical instruments—electric pianos and Hammond organs being the most popular. These instruments didn't need to include the interaction of the sound waves in the air—the model could duplicate the sound at the output jack of the instrument, without the additional power and complexity required to successfully capture the acoustic interaction of the instrument and surrounding space.

Nowadays models of those classic instruments, as well as models of electronic synthesizers (from companies like Arturia and others), are extremely popular, providing more distinctive emulations of the specific quirks and uniquely subtle tonalities of classic analog synths known for their particular “sound”. 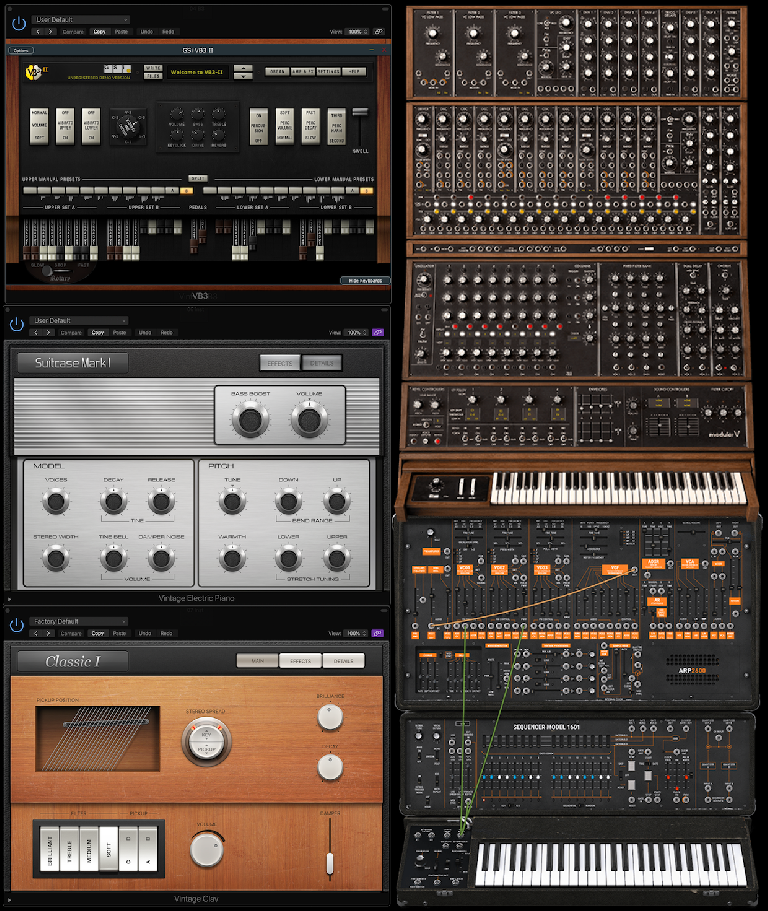 Powered by modern CPUs, modeling tech is now being used successfully to emulate acoustic instruments like piano, drums, bass, and others. Some of these modeled instruments utilize very specific code, designed to simulate a particular type of sound production, like strings or percussion—a good example is the well-known Karplus-Strong algorithm for generating the sound of a vibrating string, which dates back to early research in modeling technology. Other modeling instruments offer more general, comprehensive algorithms, letting intrepid users dial up different types of modeled sound sources and tonal modifiers. These instruments are equally capable of creating playable musical instrument sounds and naturalistic acoustic-sounding effects suitable for high-end sound design applications.

Though there may be some overlap, a modeling instrument has a different set of controls than the familiar subtractive synthesis modules utilized in classic analog synthesizers and sample-based instruments. In both of those, a sound source—either oscillators or a keymap of sampled notes—is run through filters and envelopes to shape the raw, static sounds. In a modeled instrument, interactive algorithms dynamically shape the sound according to the specific settings made by the designer.

For example, a modeled drum or percussion sound would start with an algorithm to create the vibrational pattern of a membrane (i.e. drumskin), possibly with user-adjustable parameters for emulating different types of material (plastic, calfskin) of different thickness and tension. This would be coupled with code to simulate different types of physical devices for initiating the sound—drumstick, brushes, and the like. Finally, the emulation of the vibrating element would be modified by algorithms that simulate the complex tonal characteristics imparted by resonating chambers (drum shells) of different sizes, shapes, and materials. 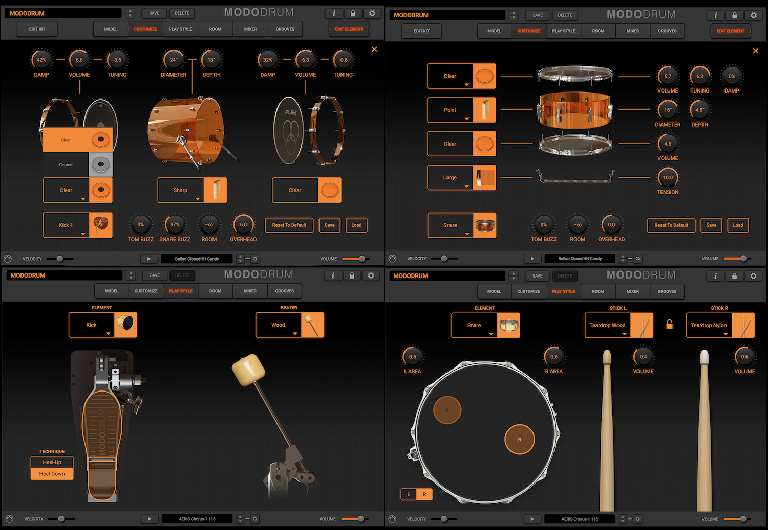 The relevant controls might be specific to a particular instrument type, or general enough to simulate any kind of instrument, from strings to winds to percussion.

Instead of the usual Sounds Source > Filter > Amplifier with ADSR/AHDSR Envelope Generators and LFOs, a modeled instrument has its own set of modules. The terminology employed might make reference to components like Exciters, Disturbers, and Resonators.

The Exciter is the sound source—the code that creates the initial raw sound of the vibrating object, like a column of air, or a tensioned membrane or string. The Disturber modifies that simulated vibration, by altering the characteristics to be consistent with the effect of different materials and techniques used to initiate a note. For example, for a model of a violin string the Disturber code would impart the effect of a bow being dragged across the string, or a finger plucking the string. This could be thought of as an envelope of sorts, but it’s based on the understanding of the appropriate physics of sound production, and has a much more complex effect on the basic sound. Again, depending on the instrument, the controls for these functions might be specific to a particular instrument type, or more general.

The Resonator could be thought of as a variation on the traditional subtractive synthesis Filter, but on steroids. Options would typically provide more than just basic low/high-pass resonant filtering or EQ—they may offer simulations of the specific complex multiple formants of certain types/shapes of instruments, like the tubular body of a wind instrument, the resonant body of an acoustic guitar, or the sounding board of a piano. Note—formants are a group of characteristic fixed resonances that give a particular instrument its unique tonality, and a modeler’s Resonator could not only impart the correct resonances for a particular instrument type, but also superimpose resonances from an entirely different instrument type for more creative sound design.

The same is true of the other primary components as well—imagine an instrument that sounds like a string that’s played by blowing air across it, or a drum that has a sustaining envelope from being played with a bow. This kind of more experimental sound design can produce instruments or sound effects that sound realistically acoustic and natural, but unlike any physical instrument that exists, or could exist, in the real world.

There’s currently a fairly wide (and growing) selection of modeled instruments out there. Many are dedicated plug-ins that offer models of specific instruments: Modartt’s PianoTeq models acoustic and electric pianos, as well as all manner of pitched percussive instrument from vibes to tubular bells; Arturia is known for its models of classic synthesizers and electro-mechanical keyboards; IK Multimedia’s MODO plug-ins offer comprehensive modeling of drums and electric bass instruments; and Roland’s modeled V-Drum (hardware) kits are a well-established option for drummers. All of these include specific programming options for tweaking the character of the particular type of instrument they specialize in, like the IK MODO Drums’ controls for specifying drumskin material, shell depth and thickness, and other drum and cymbal-specific parameters, and PianoTeq’s programming controls for string length, soundboard specifics, and the like. 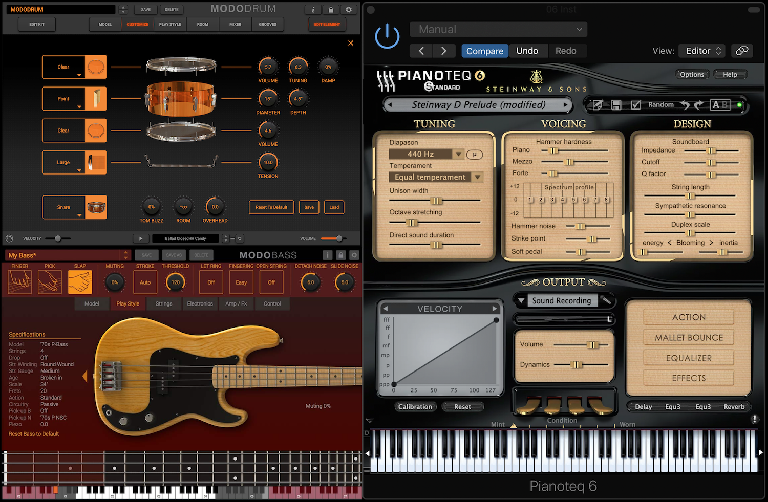 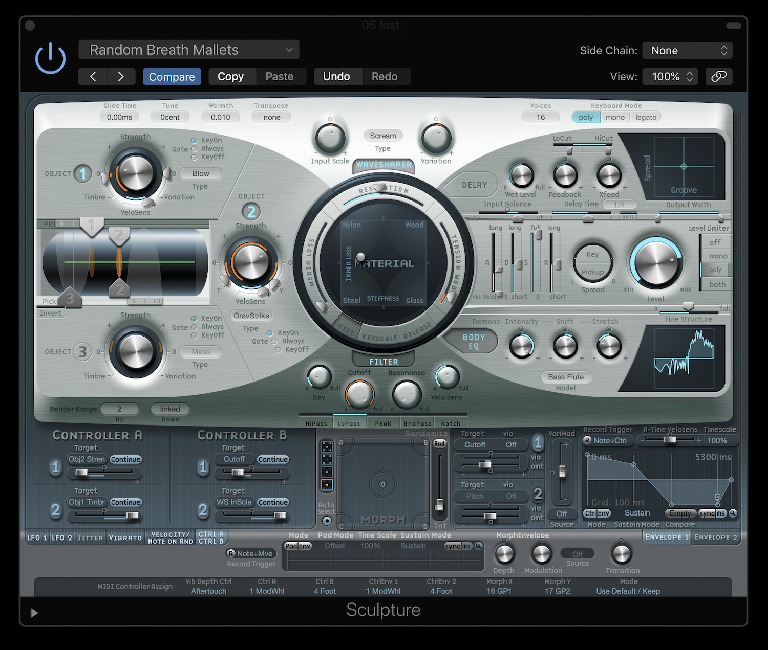 With any general-purpose modeler, the learning curve is likely to be considerable, but adventurous instrument/sound designers will find the results well-worth the effort—a universe of naturalistic acoustic sounds and highly playable instruments awaits those who are inclined to put in the time.