What can I say? Daft Punk's synth sounds simply rule (a comment I'd like to make about their music in general). The sounds are iconic. Classic. Highly memorable. I'm a fan. And when Rounik asked me to write a sound-design-in-Logic article for The Hub, I was reminded of the time when, during one of my analog synth master classes, a student asked how to create the synth sound heard in Daft Punk's "Robot Rock". Not only was it great fun to try and re-create it, but it reminded me of other classic records in which a sound using waveform synchronization -- better known simply as "sync" -- was used as the basis for equally definitive synth hooks. Amongst those records are Neneh Cherry's "Buffalo Stance" and The Cars, "Let's Go".

But enough of me taking a trip down memory lane. Let's find out how to re-create the sound used in Robot Rock using Logic's ES2 analog synth plugin!

As I'm writing this article, the emails are already flooding in asking why I had to pick Logic's most complex virtual analog synth plugin to demonstrate how to make this sound. Well, I have two reasons. They might even be good ones! I'll let you be the judge...

First, it's the only one of Logic's analog synth plugs that provides the ability to produce sync waveforms. And second there's a sound in the "Tutorial Settings" folder which we only have to make slight modifications to in order to achieve the sound used in Robot Rock.

Load up an instance of ES2 and then select the very bland-sounding "Sync Start" setting from within the "Tutorial Settings" folder. 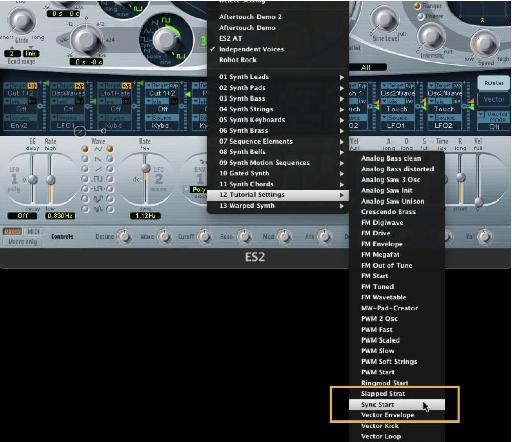 Once loaded, move the modwheel up fairly rapidly as you play a note and you'll hear the characteristic ripping sound of a sync'd oscillator. The modwheel causes this action because, as you can see in slot 1 of the modulation matrix, it's preprogrammed to let you sweep the pitch of Oscillator 2 with movements of the wheel. But what causes that ripping sound?

Well, this occurs when the pitch (frequency) of an oscillator (Osc. 2 in this case) is being changed while its waveform is being forced to reset to the beginning of its cycle every time another oscillator (the "master oscillator" -- Osc. 1) completes a cycle of its own. And this synchronizing of one oscillator's waveform starting point with another oscillator is where the word "sync" is derived from. And so, as Osc. 2's waveform is constantly being reset as you change its pitch, the waveform quite literally gets bent out of shape in the process, producing that classic ripping sound.

Now that you know the theory, let's move on to...

Return the modwheel to zero, and in the second modulation slot, increase the depth to .93 (you will probably need to hold down the Shift key to achieve this value). This sets the amount of pitch change that's going to occur in Oscillator 2, this time by means of Env1 (envelope generator 1). Now all we have to do is adjust Env1's attack and decay values to achieve the same "shape" of the sync sweep heard in Robot Rock:

Voila! We have achieved the sound from Robot Rock! And at this point you might find it interesting to compare this sound to the ones used in the other songs I mentioned earlier in the article. They're very similar!

At the end of each synth phrase you will hear some vibrato (pitch waver) in the sound. To accomplish this effect using the modwheel, do the following: 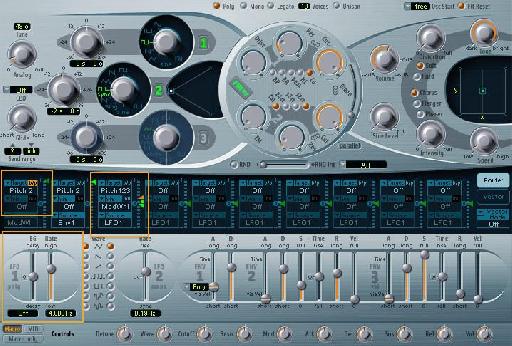 Eleven, to be precise -- the number of notes in the Robot Rock hook. In the image below we can see the piano roll and score editor displaying those notes. For copyright reasons I haven't transcribed the exact rhythm of the part, but the notes are fair game. 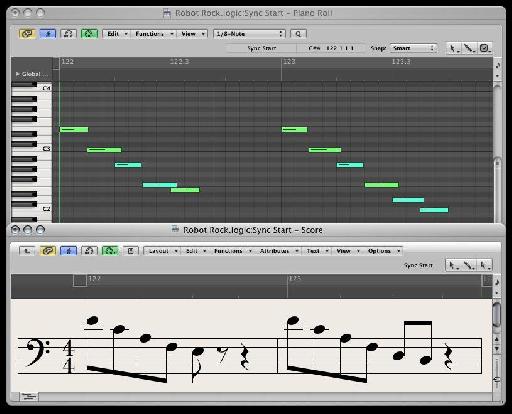 One thing you might notice: if you were to play these notes along with the track, the sound will be out of tune. It seems to be the case in every recording I've heard of Robot Rock that the pitch of the track is off by about a quarter tone. This can be remedied by tuning ES2 sharp by 48 cents (almost a quarter tone) to get the sound in pitch.

Hope you enjoyed making this sound!

Check out and in-depth tutorial on how to use the Logic's ES2 and the MIDI 101 Video Tutorial by the author, film composer and Logic guru, Peter Schwartz.

Peter Schwartz
Peter Schwartz, composer, orchestrator, arranger, pianist, synthesist, and musical director, began piano studies at age 5 and went on to earn a degree in piano performance from Manhattan School of Music. It wasn't long afterward that he began working as a product specialist for New England Digital (Synclavier) and also as a sound programmer and design consultant for Korg. Meanwhile, Peter began to pave his way into the music business, and as a session keyboardist and arranger, eventually amassing a dizzying number of A-list artists to his client roster and discography. Peter has served as musical director for David Bowie, Madonna, The Pet Shop Boys, Enya, and many more. In more recent years, he has endeavored to make his mark as a composer for TV and film, adding Fox, Disneytoons, Warner Bros., Mattel, and The Gates Foundation to his filmography. Peter resides in Los Angeles with his wife Sharon, dogs Boing and Loosie, a bass clarinet and a bassoon.
Related Videos
Comments (6)