All Articles Ableton Live
Ableton Live Advanced MIDI Technique: Manipulating Time & Playback Direction
Hollin Jones on Thu, July 19th 0 comments
Here's how to harness the power of the Note section and its tools to quickly and easily create variations on your beats, chords and melodies - with just a few clicks.

You may already be familiar with the basics of using MIDI in Ableton Live, but there's so much more that it can do than simply recording from your MIDI device and triggering soft synths. In this short video from the course Ableton Live 202: Advanced MIDI Techniques, Live expert DJ Kiva explores some of the more advanced things you can do with MIDI, such as manipulating timing and playback direction.

Kiva starts by directing you to the Note section of a MIDI track, which is where you can access many of the MIDI tools and commands you're going to need. He then duplicates a MIDI drum beat before starting to edit it, so that he has copies of both versions to work with.

Using the Reverse command, you'll see that it's possible to quickly and easily create variations of beats and other parts. With the Invert command, you can swap the positions of the highest and lowest notes, flipping a part upside down. This can be great for chords and melodies. You can even double or halve the tempo of a clip with just a couple of clicks. This course is all about taking control of your MIDI tracks - check out the whole thing for a complete guide to becoming a MIDI master in Live! 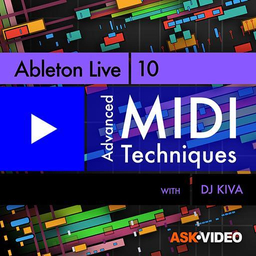 Dream It. Do It.
Do you want to learn Advanced MIDI Techniques?
Yes, I want to learn!
No Thanks, I just want to read the article.
Feedback
How are we doing?
We'd love your thoughts, feedback and questions regarding our new site. All feedback is appreciated!
We do not respond to this form! If you need support, please visit our support page.
Thank you for your input!
Your message has been successfully sent
Course Advisor
Don't Know Where To Start?
Ask A Course Advisor