All Articles Ableton Live
Recording Beat Repeat Variations In Ableton Live
Mo Volans on Tue, January 3rd 1 comments
Language
Overlook the Beat Repeat plug-in in Ableton Live and you may be ignoring one of the most ingenious randomizers available in any DAW. Mo Volans walks through the main functions in this article.

Beat Repeat is one of my favorite Ableton Live plug-ins. It's awesome for both studio and live use. The sounds it can produce are incredibly diverse and sometimes pretty random but no matter what patch you are using everything can be altered to great effect in real time.

One of the parameters I like to play with is the '˜Variation' control. This does exactly what it says on the tin, it adds variation to the effect produced and when automated the effects can be pretty interesting.

Whenever I'm messing around with Beat Repeat one of my favorite things to do is start with one of Ableton's factory presets and go from there. Even by altering three or four of the controls you can completely change the effect the plug-in has on your audio.

In this case I've loaded up a simple groove loop and used the hot swap mode to load up a patch from Live's factory library. I then tweaked the pre-set to get a nice repetitive repeat effect going. You can hear the result below and see the settings used in the screenshot. 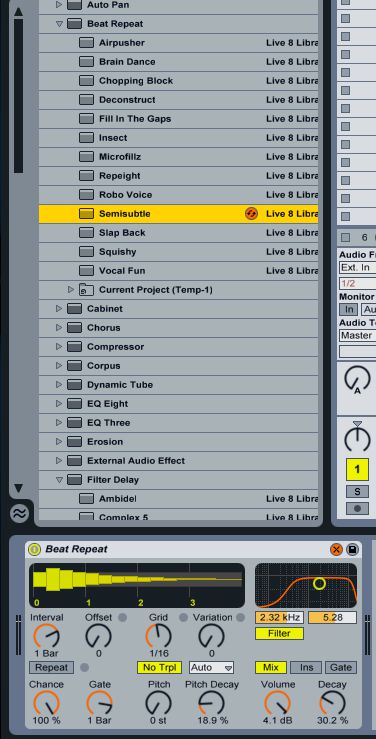 The basic patch being used

A loop being processed by the beat repeat patch:

So you should be able to see from the first screenshot that the variation control is at zero. This basically means that every time the beat repeat effect takes place it will be identical every time. You guessed it, with zero variation!

The variation parameter actually goes from zero to ten. So you can have varying amounts of random variation in your repeats. I have recorded 16 bars of audio from the beat repeat at varying intensities and you can hear the results below. 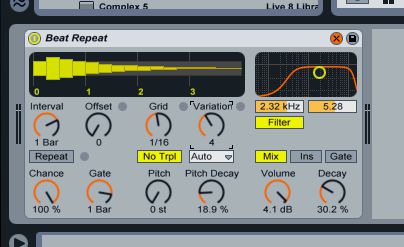 The variation is set to 4

The loop plays back with variation set at 4: 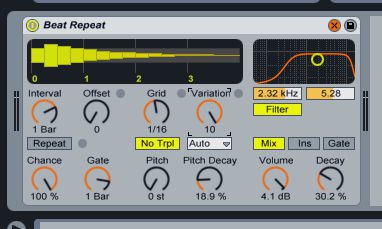 The loop in action set to 6:

It was actually very hard to capture anything here as it was obviously completely different every time I exported. Also, as you go higher up the scale the random element becomes greater. So essentially at level ten you could get 16 bars of nothing!!

And finally the variation at full tilt (set to 10):

With your patch all sorted you might find that switching between the variation amounts produces even more interesting and random results. Imagine a random, stepped LFO controlling this parameter and you would be on the right track.

This can be achieved by simply hitting record and moving the variation control. The results will then be recorded as automation, which can of course be edited in any way you like. Again the results are pretty random and change on every playback, but you can bounce large sections of this and cut out any bits you like from the resulting audio!

Some automation is recorded

And remember if you have a dedicated Ableton compatible control surface that you use with Ableton all of the included EQ's settings will be instantly mapped to its controls. About as close to using hardware as you'll get!

The automated variation in action:

Mo Volans
Mo has been a professional in the music industry for around 15 years. He has released material with the world's leading record labels and also produces music for TV and Film. Mo is also a prolific writer and is a regular contributor to magazines such as Music Tech, Future Music and EQ magazine. There isn't a piece of music software that Mo isn't intimately familiar with and he lives happily on the cutting edge of music technology
Related Videos
Comments (1)

Dream It. Do It.
Do you want to learn Live's Effects: Plugged In!?
Yes, I want to learn!
No Thanks, I just want to read the article.
Feedback
How are we doing?
We'd love your thoughts, feedback and questions regarding our new site. All feedback is appreciated!
We do not respond to this form! If you need support, please visit our support page.
Thank you for your input!
Your message has been successfully sent
Course Advisor
Don't Know Where To Start?
Ask A Course Advisor