All Articles Ableton Live
Review: Ableton Push: Instrument and Much More
Noah Pred on Thu, March 7th 2 comments
Language
How far does Push redefine the boundaries of composition for Live users? Just how good is this revolutionary instrument for beat making and melody creation? Noah Pred explores the pull factor.

Since its very inception, Ableton has earned a reputation as a groundbreaking company, continuously redefining the potential of music technology as we know it. First, Live made the ubiquitous laptop a viable performance platform for artists worldwide. Next, the improvisation of their trademark Session View evolved into a full-featured DAW, revolutionizing the concept of creative studio workflow. Now, with their first foray into proprietary hardware, Ableton's Push is set to further dissolve the boundary between inspiration and production, making Live's innate instrumental qualities easier than ever to take advantage of, while making composition more immediate in the process. 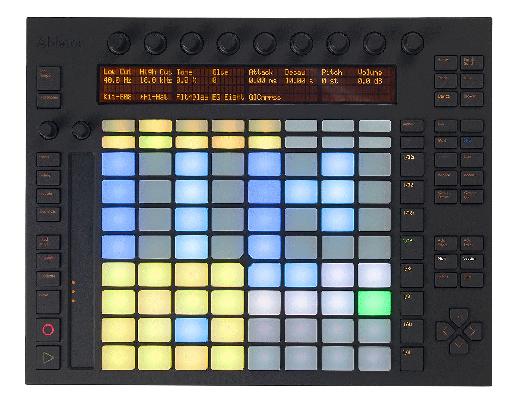 While Ableton-designed controllers aren't exactly a new phenomenon – Akai's APC40 and Novation's Launchpad were both released a couple of years ago – Push stands out from the pack by sheer virtue of its build quality alone. Its solid metal chassis and telltale heft indicate a durability that everyone should look for in such a potentially essential piece of kit. While the extra pounds may make it slightly less travel friendly, it's almost surely worth the trade-off in projected longevity; the thing, as they say, is built like a tank. The function buttons that line either side of the unit boast a satisfying blend of sensitivity and resistance, while their backlit text written directly into the buttons themselves – for easy reference in dark settings – is a lovely touch. Meanwhile, the 64-pad grid isn't only multi-color, but also velocity and aftertouch sensitive, allowing for a wide range of dynamic expression when it comes to the Push's instrumental capabilities. Add a ribbon controller and 11 touch-sensitive macro dials and the possibilities for control skyrocket; combined with its high-contrast LED display, one rarely has to look at Live's software interface at all during composition.

Starting on relatively familiar ground, Push's Session View control is a few steps ahead of the competition. Not only are the clip-launch pads programmed to reflect the color of corresponding clips in Live, but it also comes equipped with the full complement of dedicated scene launch buttons, macro set navigation, and a row of eight multi-function buttons that can be assigned to stop, mute or solo for each track. The true strength of Push's unique Session handling comes from its integrated composition buttons which allow for the ability to duplicate clips and scenes, undo, delete, overdub, and record automation directly from the device without so much as a glance at your computer – and all in real time, of course. 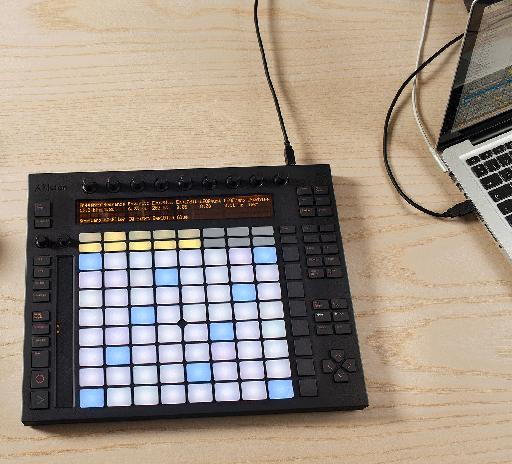 Push truly excels as a compositional tool: an instrument in and of itself. To a large degree, it could be argued that Ableton's sequencer, by design, has certain instrumental qualities, but Push goes far deeper. The first of two instrumental modes currently included with Push's software integration takes advantage of Live's Drum Racks to create a beat-making beast. Selecting a track containing a Drum Rack and switching into Notes mode accesses a rhythm programming environment that seamlessly combines step-sequencing with real time note entry to create the most powerful hands-on beat-making tool I've ever used. The top four rows of eight pads become a step-sequencing note entry area, with a green pad cycling through to display your current grid play position. The default length of a new drum clip is two bars, but you can extend it up to sixteen bars and select smaller segments down to one bar using the bottom-right 4x4 pad grid. The remaining bottom-left 4x4 pad grid corresponds to the 16 drum rack pads currently in focus; you can scroll through different focus areas with the ribbon controller or the dedicated octave up and down buttons.

To select a drum pad for step-sequencing, simply hold down the Select button and strike the desired pad; now you can program its rhythm via the step-sequencer grid above. Wanna adjust a step? Hold down the corresponding pad from the step-sequencer area and use the encoders to adjust timing, note length and velocity as displayed in the LED. To mute or solo a pad, hold down the mute or solo buttons and strike the desired pad; to delete a step, just tap to disable it. Best of all, any steps entered via step-sequencer are written directly into a MIDI clip in Live – there's no M4L go-between of any sort, it's all native. And as your rhythm loops, you can play pads in the lower-left MPC-style 16-pad grid in real time; if you want to add a rhythm in, just hit Push's dedicated record/overdub button and it'll begin to commit the notes you're playing into the clip alongside any notes sequenced.

For ultimate MPC-style note-repeat entry, engage the Repeat button; now the quantization grid/scene-launch buttons determine the note repetition interval, so you can hold a pad down to repeat notes at that quantization setting – and with aftertouch sensitivity, modulating the pressure on the pad can generate some extremely expressive rhythms. Laying out a dynamic rhythm in seconds has never been so easy – or interactive. 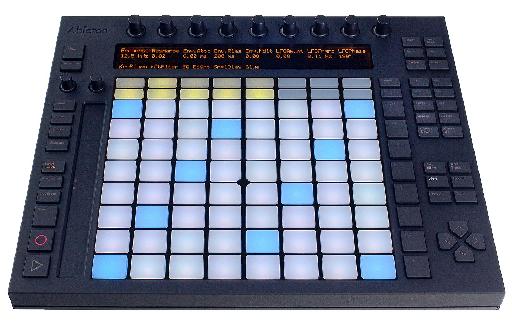 The beauty of Push' 64 pads is that they offer such versatile functionality. Beyond Session control and drum rack programming, they also afford a truly unique instrumentality when using Notes mode on any MIDI or virtual instrument. When playing keyboard, one tends to come up with different melodies than one might arrive at with the fretboard of a guitar, due to the different configuration of harmonic relationships on offer. By harnessing the 64-pad grid as a note interface, Push presents a completely new map of harmonic possibilities.

Still want to play some “wrong” notes? Leave the “In Key” mode engaged and all notes that remain in the selected scale glow white, while the darkened pads are notes outside the key – but still available for triggering. Now you can jam out some hooks with your drums already programmed and simply hit Push's record/overdub button to punch recording in and out in real-time. Then duplicate the clip, double the length, and overdub new notes to create a new, longer version with added flourish. Need a counterpoint? Add a new track and browse to find a new instrument on the fly using the dedicated Add Track button. Push makes all this possible without ever pressing stop, or taking your eyes away from Push itself. 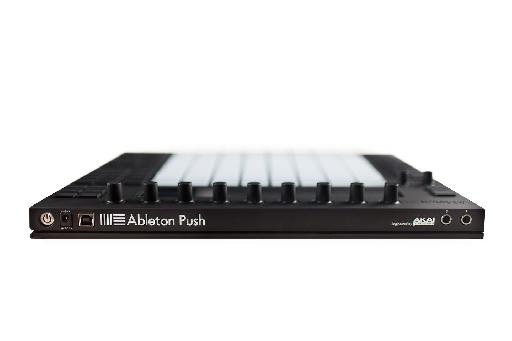 So far we've only focused on Push's pad-based potential – but it also boasts 11 touch-sensitive knobs along the top. Using the six buttons to the right of the LED display, we can easily access the primary areas of control within our set. Taking advantage of Live 9's hotly anticipated Session Automation feature, we can record any parameter changes we make with the knobs in real time by engaging Push's Automation record button and punching the overdub button to capture our parameter changes – resulting in wildly dynamic patterns in no time at all.

When Push comes to Shove

In truth, there are still a few features left to be desired: automation-lock for the knobs, 3rd-party Plug-In and Audio Clip browsing, and ideally, a dynamic way to edit audio clips with the pad grid – but all these and more are sure to come with future software updates. Nevertheless, Push's drum programming and note entry are worth the price of admission alone, while its Session control is the best on the market. Even in its first implementation, Ableton is set to revolutionize music production and performance yet again with Push. 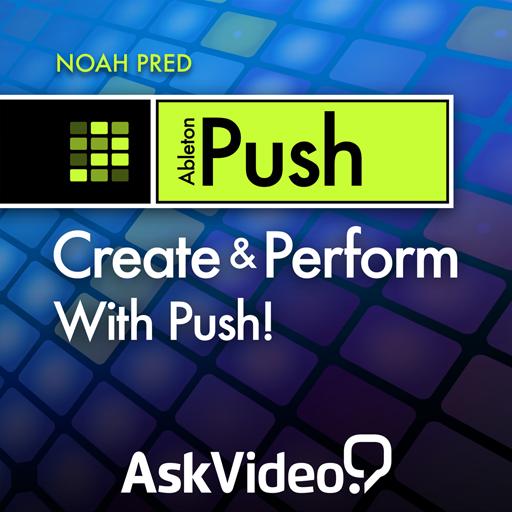 Dream It. Do It.
Do you want to learn Create & Perform With Push!?
Yes, I want to learn!
No Thanks, I just want to read the article.
Feedback
How are we doing?
We'd love your thoughts, feedback and questions regarding our new site. All feedback is appreciated!
We do not respond to this form! If you need support, please visit our support page.
Thank you for your input!
Your message has been successfully sent
Course Advisor
Don't Know Where To Start?
Ask A Course Advisor