Novation makes a range of hardware that's compatible with many different DAWs and other software, but often designed to play particularly nicely with Ableton Live. The Launchkey Mini is its tiny but well-featured MIDI keyboard controller and it has had a revamp to bring it officially to its third generation. It’s still highly portable yet solid and well built, and powers over USB using the bundled cable. You also get a sustain pedal input - unusual on a unit this compact - and a TRS mini jack MIDI out port for connecting MIDI hardware, although a cable is not supplied in this instance.

Connect the unit to your Mac or PC and you are walked through Novation’s automated setup process which is straightforward. The main panel of the controller is well designed, its 25 keys small but perfectly playable. You get 16 backlit pads with RGB lighting that changes based on context - for example colour matching clips in Live - and velocity sensitivity. There are 8 rotary encoders as well as pitch and modulation touch strips, octave and transpose modes and transport controls easily accessible from the main surface.

There’s no screen but Novation has made clever use of the Shift + function and some good labelling to put a range of extra functions at your fingertips. These are explicit from a look at the text so for example there’s arp mode and rate, octave, latch, rhythm and more assigned to piano keys. Speaking of arpeggiation, you get up to 4 octaves of range, adjustable gate time and more and there’s also a Fixed Chord mode for triggering chords from single notes, which are user-definable by pressing the keys you want. Both of these tools help you go beyond the confines of the small keyboard to access a wider range of notes.

The controller comes with Ableton Live Lite and has been designed to partner it, so there’s deeper integration than ever before. This includes clip and scene launching, device macros, track select and transport control as well as decent mixing support like mute, volume, pan, sends and so on which all works flawlessly as you navigate around a Live session. There’s decent Logic Pro support out of the box as well (details on the website) and support for the HUI protocol for working with Cubase, Pro Tools, Reason and other DAWs.

In addition to this you can create custom setups with personalised MIDI mappings for the knobs and pads, via the Components web app which is easy to get to grips with. There’s also a generous software bundle including sounds, instruments and effects from AAS, Softube, Spitfire Audio, XLN Audio and Klevgrand – plus membership of Novation Sound Collective which gets you free stuff on an ongoing basis.

This is a great little controller that can talk to your computer and your MIDI hardware, with a few features you might not have expected like sustain pedal input and a web-based MIDI editor. It worked well with all the DAWs I tested although clearly, Ableton Live is the one it has been designed to be most deeply integrated with. Even if you’re starting from scratch it comes with Live Lite, so taken with the other bundled instruments and sounds you have more or less everything you need to be making music, anywhere, in no time. And that’s a sweet deal for a shade under £100.

Cons: No USB-C, though this is still an issue across tech peripherals generally. 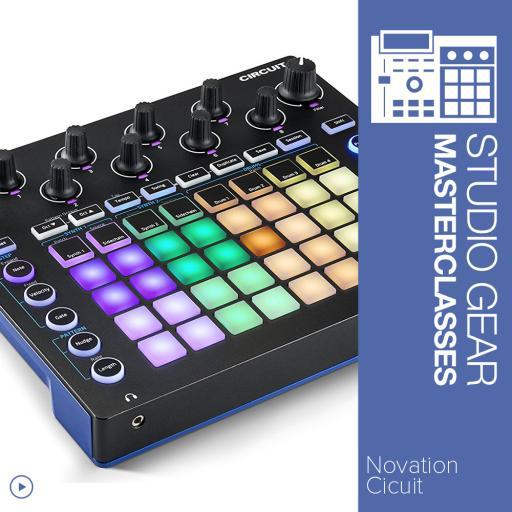 Dream It. Do It.
Do you want to learn Novation Circuit 1.6 Update & Power User Features!?
Yes, I want to learn!
No Thanks, I just want to read the article.
Feedback
How are we doing?
We'd love your thoughts, feedback and questions regarding our new site. All feedback is appreciated!
We do not respond to this form! If you need support, please visit our support page.
Thank you for your input!
Your message has been successfully sent
Course Advisor
Don't Know Where To Start?
Ask A Course Advisor