All Articles Ableton Live
Using Stutter Edit in Ableton Live Without a MIDI Keyboard
DJ Wolfie on Fri, May 20th 0 comments
Language
As every touring DJ knows, minimizing the gear you depend on is crucial. Wouldn't it be great to have a Stutter Effect for your live show, without having to bring a keyboard along to trigger it?

As every DJ knows, less equipment means one less thing to break, one thing less to lug around all over the world. DJ booths have become cramped experiences indeed with controllers, laptops, and other gear.  Here's how to use iZotope's Stutter Edit without using an external MIDI Controller.

In my live setup, I have 5 audio channels, A stutter edit 6th channel, and a grouped channel 7 track that contains five midi channels (8-12) that correspond to each audio channel.

The 5 audio tracks should be set this way for the I/o:

Next, I create a midi track, and label it "Stutter".  I have 5 audio tracks, this then is the 6th track, so I call mine "stutter 6". Do not put the stutter edit device on this track. This track has nothing on it as far as devices or sounds. All this track will do is hold clips with midi data.

Set the I/O on the Stutter Edit 6 channel to the following: 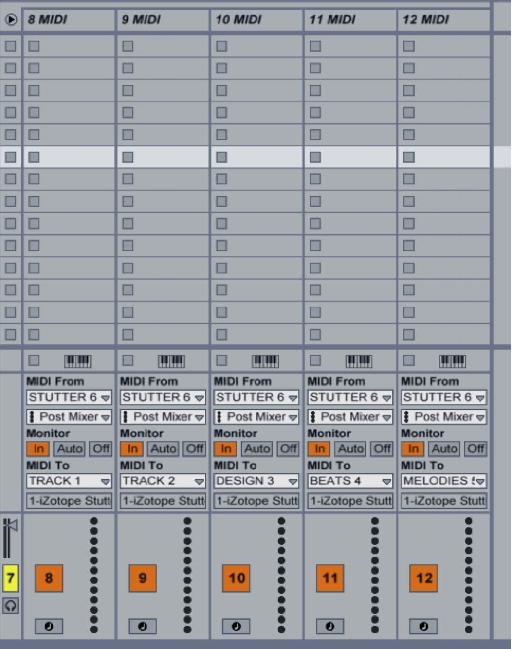 Now we need to create some hidden midi tracks to route the audio one at a time to each audio channel. In my example I have 5 audio channels. So I've created 5 midi channels.

I group them all onto track 7. Do this by selecting the midi channels and hitting Command-G to create a group. You can see in the example I have tracks named "8 midi, 9 midi, 10 midi, 11 midi and 12 midi" all grouped under track 7.

Set all of these midi channels I/O to the following settings:

Set the first one to Track One. Set the second midi channel to Track 2, and so on.

Now, minimize the grouped track 7, since you won't need to look at these midi channels while playing live.

Play an audio track on channel one. Make sure the stutter edit device is "on".

Record arm a clip on Stutter Edit 6, and start recording. Play a note on your keyboard, as the clip records. You'll hear the effect on the track playing on audio one.

Make as many clips as stutter edit effects that you like by recording different keyboard notes into clips on the Stutter Edit 6 channel.

There are ways to set each of these clips so they only play as you hold the trigger button, and you can set them to trigger immediately, ignoring the global tempo. 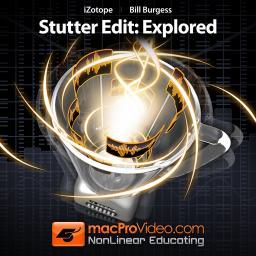 If you're interested in picking up a copy of Stutter Edit, our good friends at iZotope have provided all macProVideo.com members with a 20% off discount! You can download Stutter Edit Directly from www.izotope.com and get this amazing software for just $199 (regularly $249).

From now until June 3rd (2011) get 20% off iZotope's Stutter Edit using the coupon code below:

DJ Wolfie
Dj Wolfie headlines parties from coast to coast, both in main stream venues and the underground circuit. In 2008 he's played at Coachella Music Festival on the bill with Prince and Roger Waters, The Optimus Alive festival in Portugal with Rage against the machine, Bob Dlan, and Neil Young, The All Points West Festival in New York with Radiohead, Underworld, and Jack Johnson. His music features a broad range of funky tunes with ass shaking beats. He throws some of the wildest invitation only events in Los Angeles, regularly packing in 1000 or more people to artistic fueled musical extravaganzas.
Related Videos
Comments (0)