All Articles Audio Software
What Is Filter Disco? A Guide For Electronic Producers
Hollin Jones on Wed, November 29th 0 comments
This popular genre of dance music is easier to make than you might think - but you'll need to know the fundamentals. Olav Basoski reveals all in this short video.

You will almost certainly have heard Filter Disco but quite possibly done so without knowing that's what you were listening to! And yet it's very popular, so what exactly is it? In this short video from the full course Dance Music Styles 115: Filter Disco, Olav Basoski breaks down exactly what the characteristics of this style of music are, revealing that it's essentially a blend of house music and disco music.

Using beats and basslines he creates, Olav shows you how adding filters on top of house and disco patterns lets you create this familiar genre of music. Check out the rest of the videos in the course to get a full walkthrough on exactly what makes Filter Disco tick!

Filter disco is the perfect blend of house and disco music. Learn everything about this energetic dance music style in this entertaining course by the one and only Olav Basoski.

Filter Disco is all about good vibes, energy, coolness and, of course… filter sweeps. It’s been around for a couple decades now, and it’s very hot at the moment. How do you create it? Find out how in this course by legendary house producer Olav Basoski, and make the magic happen in your own filter disco tracks!

In this course, Olav Basoski dissects a filter disco track. He starts by defining the songwriting features and themes that make this genre unique. Listen as he reveals his production techniques, such as arrangement tips, creating variety with breaks and fills, cool ways to create unique noise sweeps, how to completely change the groove of a track with different basslines, etc. This is followed by a deep look at one of the most important elements of a filter disco track… you guessed it: filters! Finally, Olav talks about common mistakes you need to watch out for when producing a filter disco track.

So sit back, watch this info-packed tutorial course, and learn about filter disco from one of the best educators on the planet: Olav Basoski! 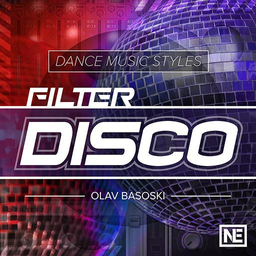 Dream It. Do It.
Do you want to learn Filter Disco?
Yes, I want to learn!
No Thanks, I just want to read the article.
Feedback
How are we doing?
We'd love your thoughts, feedback and questions regarding our new site. All feedback is appreciated!
We do not respond to this form! If you need support, please visit our support page.
Thank you for your input!
Your message has been successfully sent
Course Advisor
Don't Know Where To Start?
Ask A Course Advisor