All Articles After Effects
Create a Predator Style Voice Analyzer in After Effects
Toby Pitman on Fri, August 9th 0 comments
Language
Here's a stunningly quick Adobe After Effects tutorial on how to create the waveform analyzer display inspired by the the film Predator. Toby Pitman takes you through every step. Monster not included.

Here's a quick waveform analyzer display inspired by the the film Predators. The effect uses multiple layers of the stock After Effects '˜Audio Spectrum' effect to produce a plasma like waveform display with the help of some other standard After Effects plug-ins. I'll show you the basics of how to build a similar effect.

Step 1 - Set Up your Composition

Create a New Composition (Command/Control-N) and make it 1280 x 720 pixels about 10 seconds long.

We're going to work in 32-bit Per Channel mode. This can be set in your Project Settings under Color Settings or you can Option/Alt-click on the Color Setting at the bottom of your Project window. This allows you to use higher luminance levels which work great when using the Glow effect for a more blown out look. 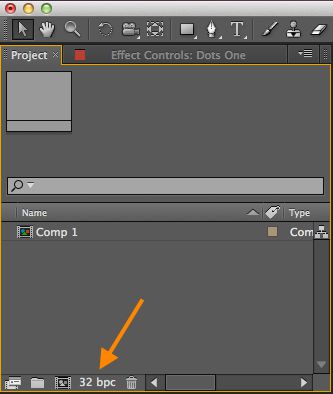 Finally create a Black Solid in your main Comp as a background. 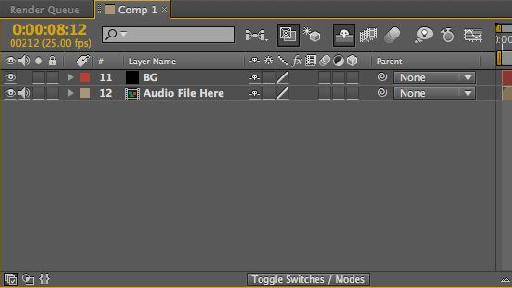 The idea is to layer up different iterations of the same basic effect to form a more complex composite with lots of variation. Here's the basic idea for all the layers. 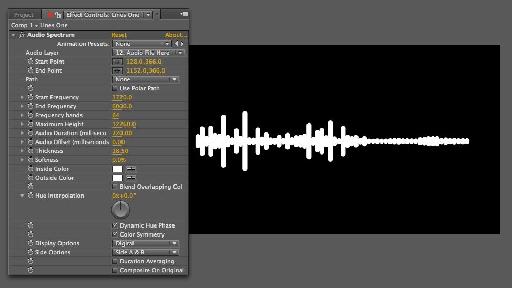 Next add a CC Ball Action effect (Effect > Simulation > CC Ball Action). Here's my settings. This will turn the Spectrum into dots. 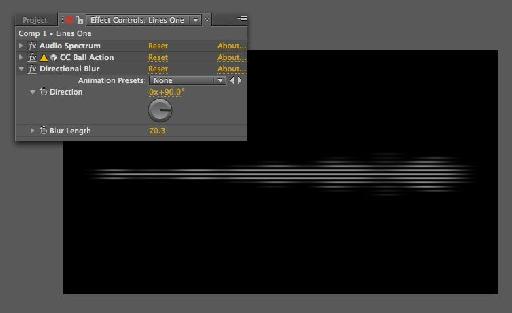 This is our base layer.

Duplicate your lines layer and tweak some settings! Here's my next layer which is more of a dot effect. Set it's Blending Mode to Add. Here you can see the effect so far.

Duplicate this layer and set up another version. Here I've tweaked the Grid Spacing on the Ball Action to offset the dots a bit adding more variation. 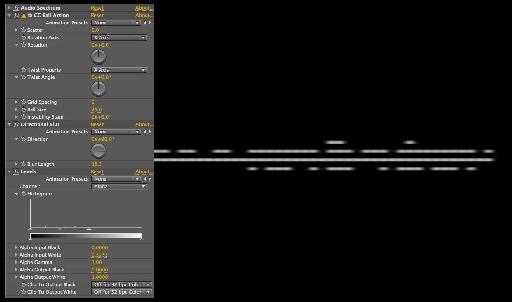 I've also created a new comp and added a solid with some Fractal Noise on it (Effect > Noise > Fractal Noise). I've added an expression (time*240) to the Evolution parameter to give it some motion. In my main comp I set this as a Luma Matte to my previous dot layer. Here's my composite so far.

I've made another duplicate layer and increased the bands on the Spectrum to 128 which creates a more complex and bulky version. Here's the composite. Notice the whites are blowing out due to the 32bpc.

Step 5 - Add some Color And Glow

I'll create a New Adjustment Layer and add a Tritone effect (Effect > Color Correction > Tritone) to translate the greyscale values to color. I'll then add a Glow (Effect > Stylize > Glow). You can now see the effect coming together. The 32bpc gives the glow a real fiery hot feel! Here's my settings. I'll add another Adjustment Layer and Add a second Glow with a wide radius to further blow out the colors. You can dial in the strength using the Layer Opacity. You can see the variations in the audio file as your RAM preview give a nice effect. You can see how a few simple techniques can turn the Audio Spectrum into something much more cool and interesting! Experimentation is the key here. Build up your layers and see what you can get!

Dream It. Do It.
Do you want to learn Secrets of Particle Playground?
Yes, I want to learn!
No Thanks, I just want to read the article.
Feedback
How are we doing?
We'd love your thoughts, feedback and questions regarding our new site. All feedback is appreciated!
We do not respond to this form! If you need support, please visit our support page.
Thank you for your input!
Your message has been successfully sent
Course Advisor
Don't Know Where To Start?
Ask A Course Advisor