Put your hands up if you ever use Shape Layers in After Effects! No? Well, you should cause there's a whole heap of cool stuff you can do with them. The reason that they are so nifty is you're not just limited to the shapes provided by the Shape tools that After Effects provides like circles, squares, stars, etc. You can paste any paths from Illustrator or Photoshop into Shape Layers in AE.

After Effects offers a nice selection of vector-based effects too that are contained inside the Shape Layer. These include things like Pucker and Bloat, Offset Path, Twist, Zig Zag, Rounded Corners and Wiggle Path (an animated version of Illustrator's Roughen Edges). All of them are very common path-based FX that are featured in Illustrator.

One other very handy thing is that you can convert Text Layers into Shape Layers and use these Shape Layer effects to create some nice results. Here are three quick tricks when using this technique. All these FX are created with just one Shape Layer.

Creating Multiple strokes on text in After Effects isn't as easy as it could be and can require a lot of messing about with duplicating layers, that is until you convert the text into a Shape Layer! Then it's really easy!! 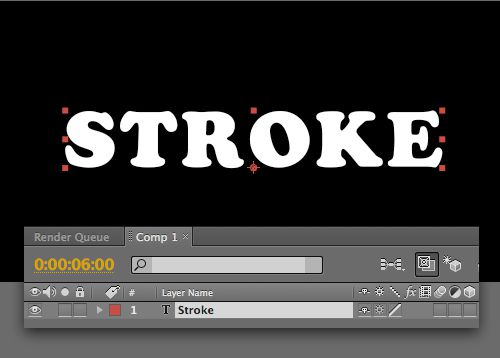 Select Layers > Create Shapes from Text to change the text into a Shape Layer. 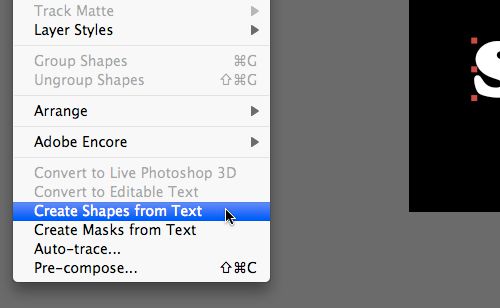 You see that After Effects keeps and hides the original text layer and creates a new shape layer called '˜Stroke Outlines'. 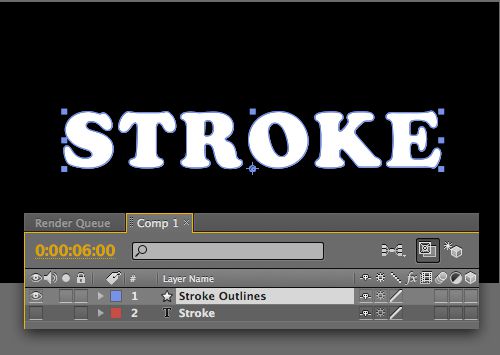 Shape Layers are like containers. If you open the Shape Layer you'll see all your individual letter shapes inside a '˜folder' called 'Contents'. 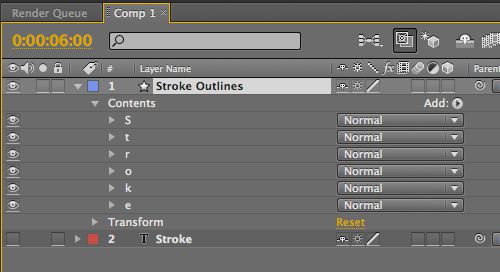 Each letter has its own set of parameters like Path, Stroke, Fill and Transform giving you a lot of control over the look of the text. The only drawback is the text is no longer editable but this is easy to change.

If you select Contents and click the Add button you'll see a list of things you can add to your Shape Layer, things like vector effects, new shapes, fills, strokes etc. I'm going to add a Group to house all my letters. 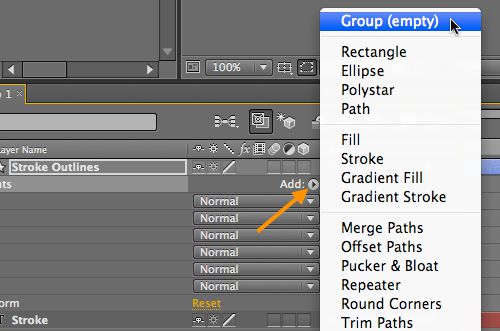 I just select all the letters and drop them in the group. I've renamed it 'Text Stuff'. 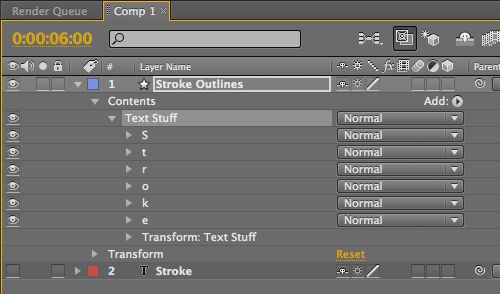 Setting up this type of hierarchy is going to come in handy later for many reasons, one of which is if I need to change the text later, I can just delete the contents of 'Text Stuff' and drop some new converted text shapes into the Group.

Next up I'm going to null the master Fill by selecting the Stroke Outlines layer and clicking the orange '˜Fill' edit option and making it transparent. Same for the Stroke. This allows me to control the colors within my Shape Layer. 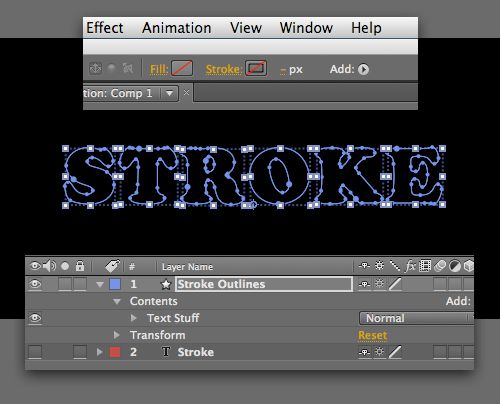 With the Shape Layer selected I'm going to add a fill and stroke effect to the Contents folder.

It's handy to know there is a layer order inside the Contents folder that goes from bottom to top (just like Layers) and here the Stroke is placed beneath the Fill and both are effecting Text Stuff. It's even more handy to know you can nest these Fill and Stroke effects (vector ones too) inside the group and they only effect that group. You could add another group in the same Shape Layer with a whole other bunch of independent fills and effects. 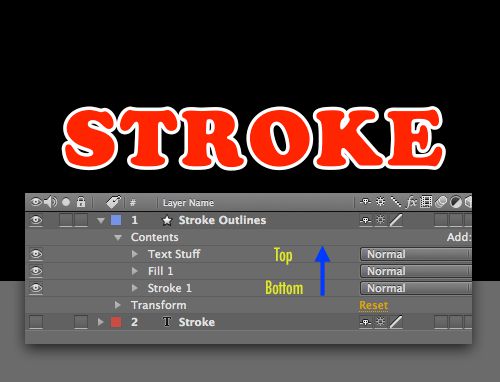 All I have to do now is set some colors up in my Fill and Stroke and just duplicate the Stroke effect. This creates a new one underneath the original. Just adjust the width and new color. 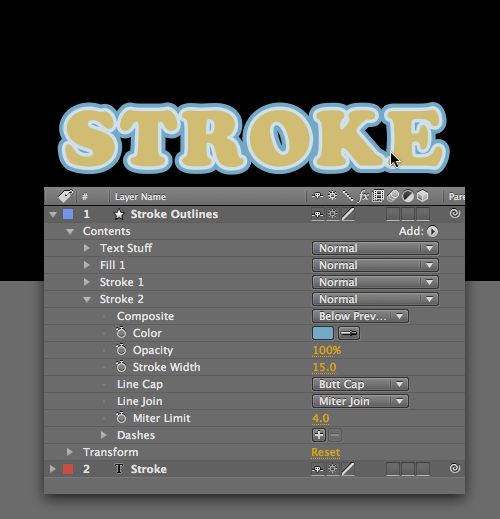 Just keep on duplicating till you get a result you like! Easy! There is a technique for making this whole process dynamic using expressions which I'll cover in another article. 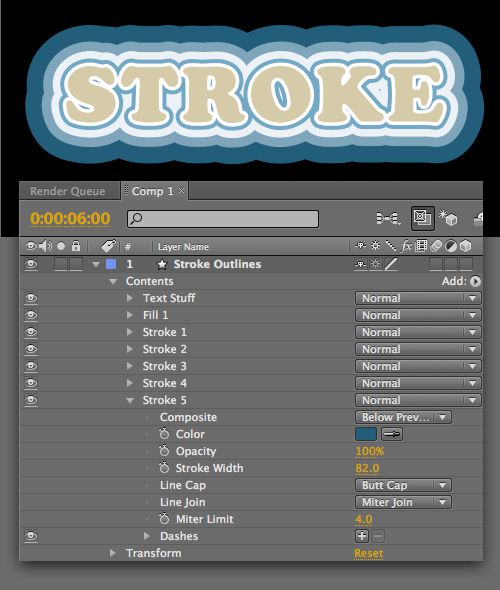 I can now animate each letter individually using the letters Transform properties.

For this effect I'm going to use a vector effect to create a quick spooky text reveal. I've converted and grouped some text in a Shape Layer like before and added a Fill to the group. 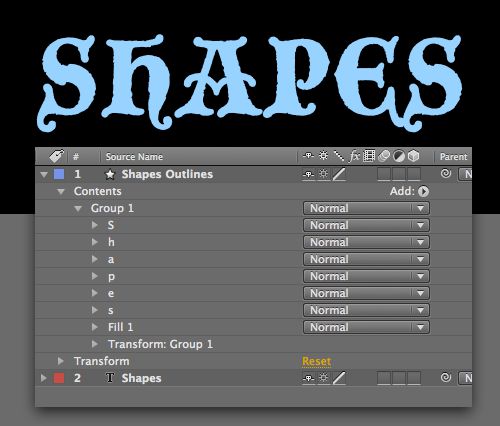 With the Shape Layer selected I'll add a Twist effect from the Add menu. 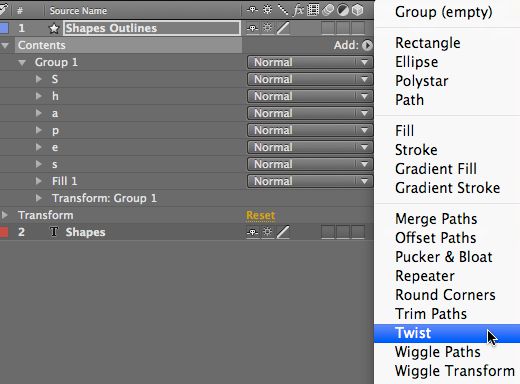 If I set the Twist angle high you can see it distorts each letter from the group (you could do this for each letter by placing the effect inside the letters folder) not as a whole. This would be impossible with a text layer. 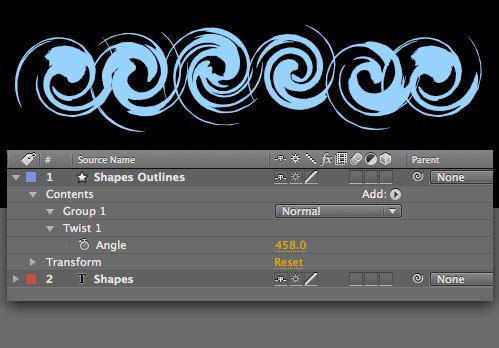 I'll blur this by adding a Fast Blur to the layer. 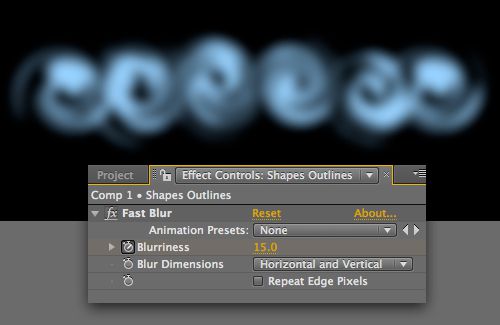 Next, add a Glow to the layer. 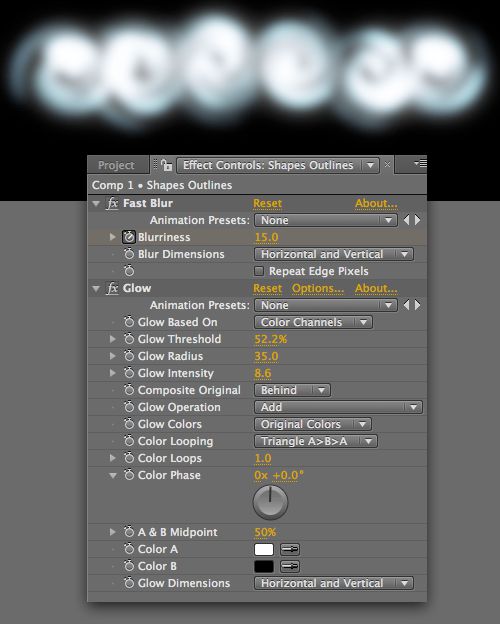 Then a Vector Blur to give it a more smokey feel. 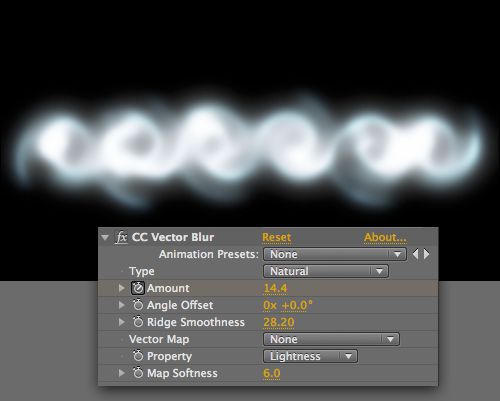 Then I can just animate the strength of the Twist and Blur effects to zero. Here's the result.

This one is quite cool. Set up some text (center aligned) in a group like so. I've named this 'Repeat'. 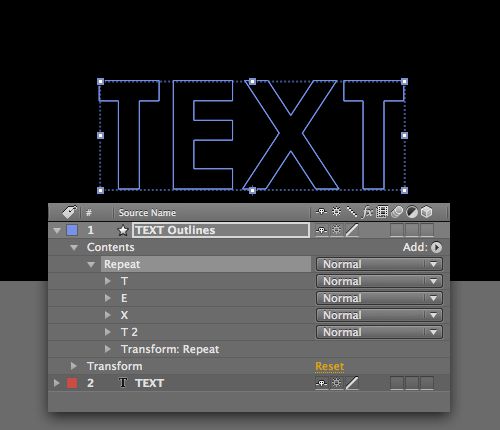 Duplicate the Repeat group and name it 'Top' and hide it; we'll come back to it later. 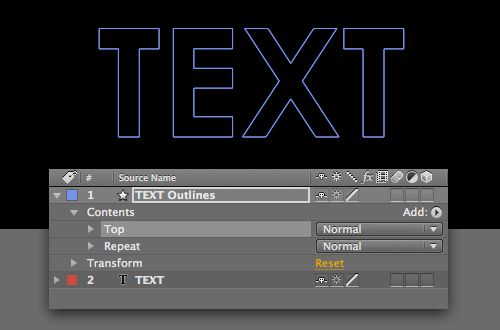 With Repeat selected add a Stroke to this group. 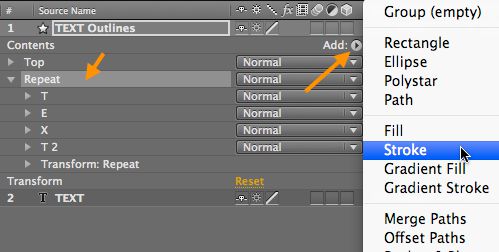 Add a Dash to the Stroke by pressing the plus button. 2px is good. 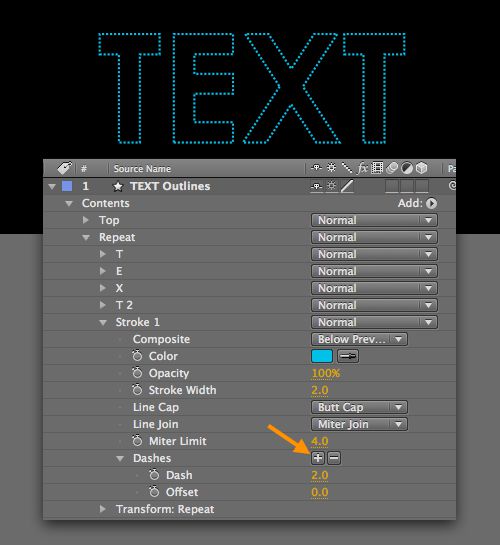 Now with Repeat still selected, add a Repeater to the group. 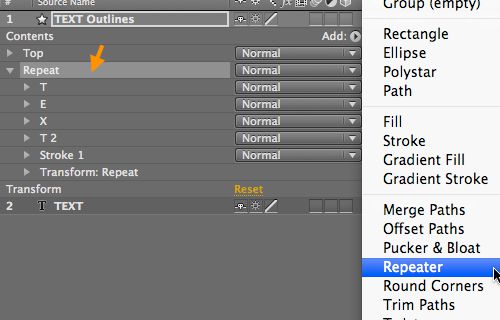 This makes a specified number of copies of the contents of the group. If you set the Scale of the Repeater to 99% you get a faux 3D effect. Set the End Opacity to 0% to make it fade out. The Repeater is very powerful and you can achieve some really nice effects with it. 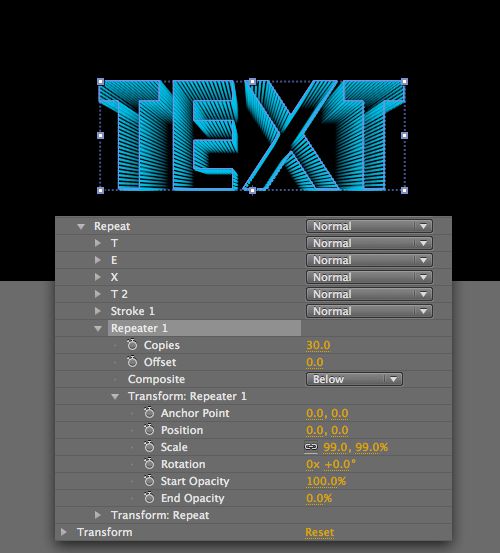 If you move the Y Anchor Point of the Repeater it affects the up/down direction of the 3D effect, moving the X Anchor Point moves it left/right. Nice! 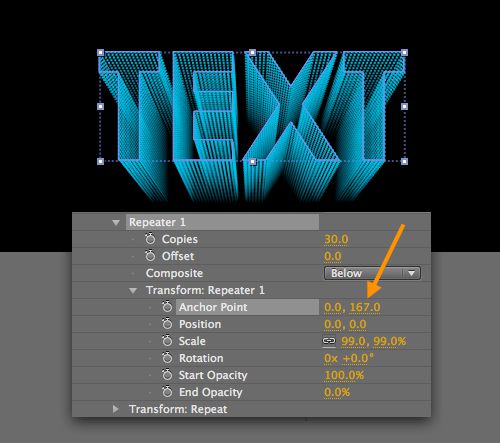 Go back and unhide the Top group. With it selected add a Stroke to the group as shown below. This goes back to what I said about each group: being able to have independent effects. 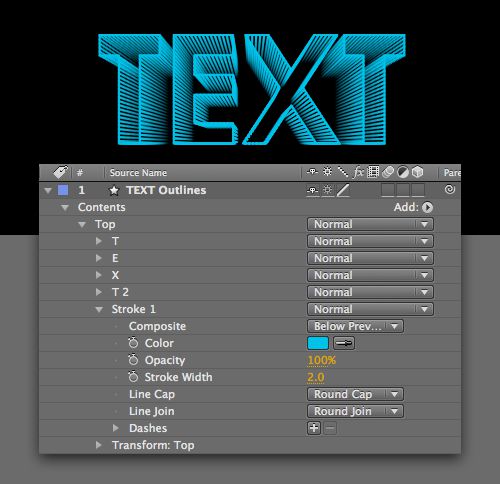 Now here's the cool part! Make the Shape Layer 3D and add a Camera to the comp. 35mm is fine.

Option-click (Alt on PC) on the Repeater's Anchor Point stopwatch and create an array by adding square brackets like this [ ] in the expression box.

With the text cursor inside the brackets, pick whip to the X position of the Camera like so: 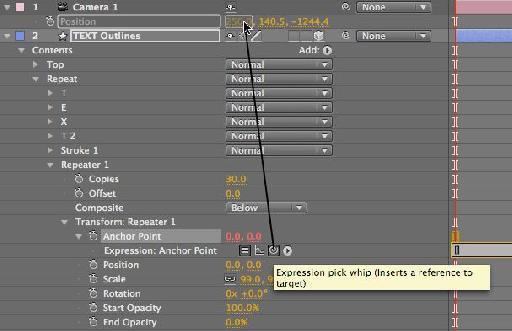 Type a comma after the expression and pick whip to the Y position of the Camera like so:

You should have this expression: 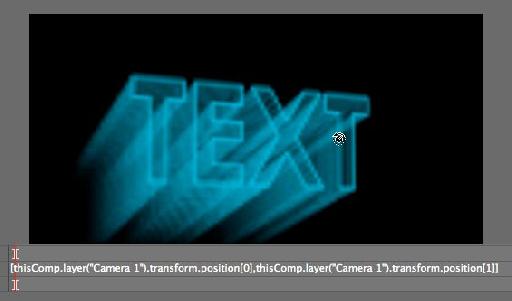 Add some Blur and Glow to smooth out the effect of the Stroke. 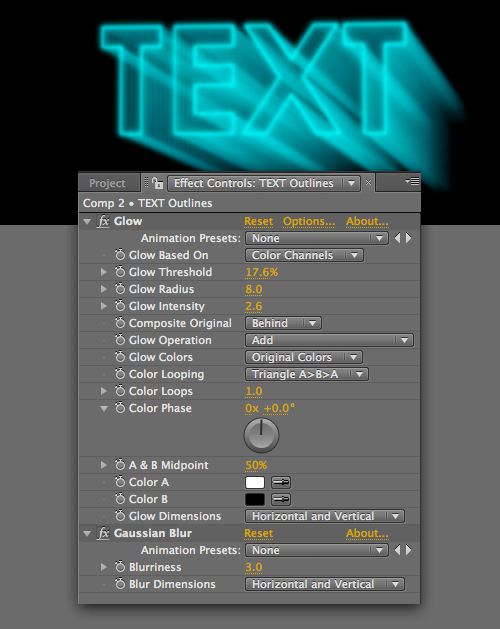 Here's the effect in action.

Not bad for one shape layer!! This is just the tip of the iceberg when it comes to what can be achieved with Shape Layers. Expect some more Shape Layer madness in the future!!

Download the project files for this MPV Hub tutorial here!

Check out the growing range of After Effects Video Tutorials from macProVideo.com here.