Recording MIDI from your controller shouldn't have to be nerve racking! This lesson will help you overcome your recording 'red light jitters' so you can capture the best performance possible without the stress. Some people have a natural 'ear' for music, but don't yet have the keyboard skills to play in the parts they hear in their head... If that sounds familiar, this article is for you. I'll be showing you two techniques on recording MIDI while in Cycle Mode.

Before we begin, let's enable the Capture Recording button. If you're unfamiliar with this button, you're in for a treat. It basically allows you to capture any MIDI you've played (while Logic is in playback mode) after you've played it, even if the record button wasn't enabled.

When you Control-click the Transport bar, you'll have the option to select 'Customize Transport Bar.' Click this, and a new window will appear. Check off the Capture Recording box, click Save As Default, then click OK. A new button will appear to the right of the Transport's Record button. We'll be using this button soon, so hang in there. 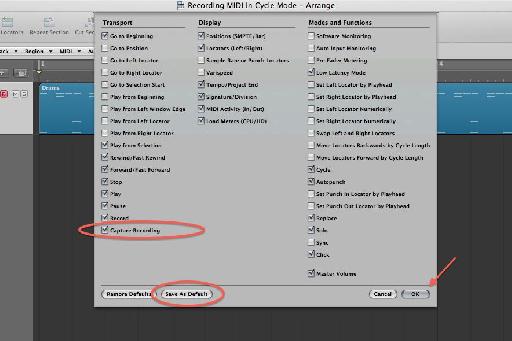 Step 2 - Play notes while in a Cycle

Open a song you've been working on, and load a sound you like. I'm using a lead sound I made in the ES2. Put a Cycle around an area of your song you'd like to add the sound to. I've selected a four bar Cycle. Hit the space bar, relax, and when you're ready, start playing notes on your keyboard controller. Keep playing till you're happy with what you've played, and then hit the spacebar to stop.

Step 3 - Capture What you Played

Now click the Capture Recording button you enabled above. Just like recording audio in Cycle mode, everything you played was captured into a 'Take Folder.'

You can open the Take Folder and see all the takes within it by clicking the arrow on the left. Find the best take, then from the Take Folder's right corner arrow choose 'Flatten.' If you want to keep more than just the one take, select 'Unpack' instead. This unpacks every Take. Find the ones you want, and delete the rest (and the tracks they were unpacked to). You can then piece them together by placing them on after another. 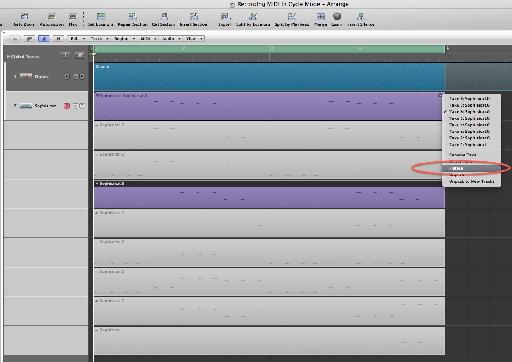 Set the MIDI you just recorded aside, and outside of the cycle.

Now let's record MIDI from our controller by actually hitting the record button. Before starting though, select 16th note quantization from the Region Parameters box. By doing this, the notes will sound quantized as they're being played in. 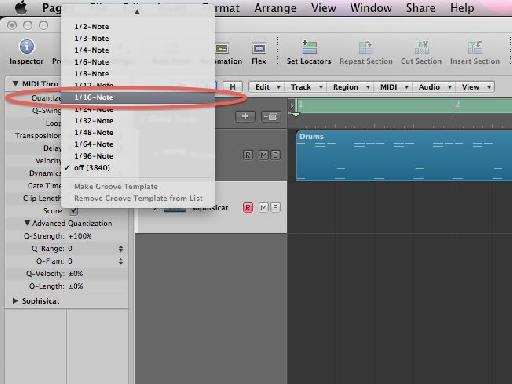 Make sure Cycle mode is still enabled, and hit the record button in the Transport. Listen to the groove of your track, and when you're ready, play a note that's in the key/scale of your song. When the cycle comes back around, you'll hear the note you played. Now play another note in a different area. Repeat the process until you've created a cool pattern.

You just built' a part note by note, and each note you added was merged into one single region. If you don't like a note you played in, either Undo and start the process over again, or delete the note in the Piano Roll later. This method of recording MIDI is called 'Merge in Cycle Record.' It's Logic's default setting when recording MIDI (with the record button) while Cycle is enabled. In case your setting was changed, you can enable this by going to File > Project Settings > Recording. Under 'Overlapping Recordings', select 'Merge Only In Cycle Record.' 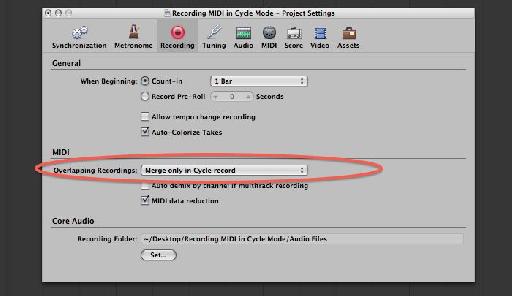 Darren Burgos
Darren started making music on computers when he was a teenager in 1987. His first computer was an Amiga, and when he realized the power of computer-based production, his addiction for making electronic music began. Darren switched to Mac in 1994 and started using Logic Pro. He's been involved in many music projects over the years including Psychoid. For two years Darren travelled with Apple showing Logic Pro to visitors of Macworld, NAMM, Remix Hotel and NAB. Currently, he teaches a class in L.A. on electronic music production using Logic for Logic Pro Help. Darren also runs two small businesses on Mixing, Mastering and Logic Pro training and support.
Related Videos
Comments (1)

Dream It. Do It.
Do you want to learn Steve H's Logic Master Class #1?
Yes, I want to learn!
No Thanks, I just want to read the article.
Feedback
How are we doing?
We'd love your thoughts, feedback and questions regarding our new site. All feedback is appreciated!
We do not respond to this form! If you need support, please visit our support page.
Thank you for your input!
Your message has been successfully sent
Course Advisor
Don't Know Where To Start?
Ask A Course Advisor