It seems only a few short months ago that I explained how to create a FrankenRAID from two external USB3 drives. Why look at something else? Well, it turns out that any RAID gets slow when it gets full. My old 6 TB was very nearly full, and the speed had fallen away to barely better than a single drive. Something newer, better, and more suitable for the long haul was required'"enter the ThunderBay IV!

Available from OWC, the ThunderBay IV that I purchased is an empty box with four bays for hard drives, and a Thunderbolt interface. The controller is simple, just presenting four drives to the Mac and letting it sort out what to do with them. While that's not ideal for everyone, the built-in RAID 0 on the Mac means I can wrap the drives together for maximum speed with minimum safety, and (crucially, for me) use it on just about any other Thunderbolt Mac without any extra software. My iMac can die and I can just move to my laptop. 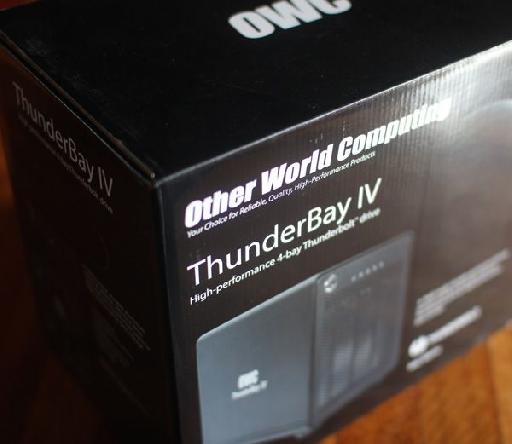 Unexcitingly, here's the box it comes in!

Since I bought my ThunderBay, OWC now sell the same box with a software RAID solution that supports RAID5'"which costs 25% of your space, but can survive the failure of any individual disk. Many people will choose to go that way, and it's great that it's an option. The current drives all have Thunderbolt 2, while my early model has Thunderbolt 1; not a problem today (as my iMac also has Thunderbolt 1) but potentially an issue for daisy-chaining on my next Mac. 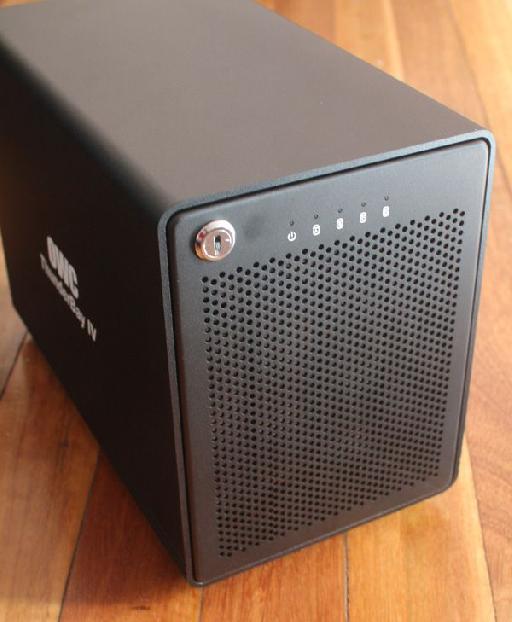 Here's what it looks like from the front, and yes, they include the key.

Yes, it's very fast. I filled my case up with four Toshiba 3 TB drives, which are fast, quiet and (so far) reliable. Even now, when it's more than half full, it can still push more than 600 MB/s in reads and writes, which is enough to handle 4K multicam in ProRes HQ. Keeping the unit fast should be as simple as not filling it up all the way, so be sure to budget for enough space to handle all your current projects within 75% of its total size. For far more extensive speed testing, look to MPG. 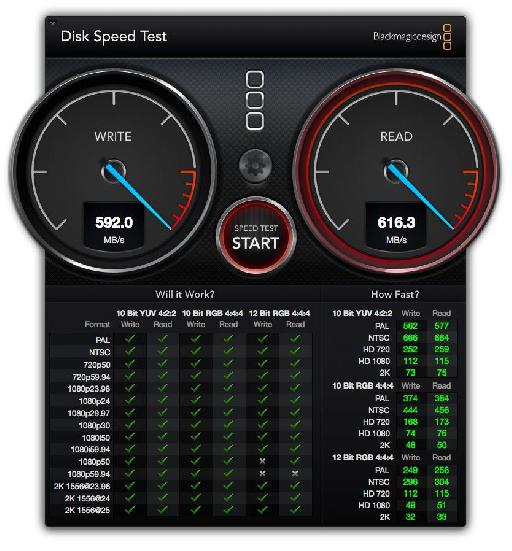 Blackmagic Disk Speed Test set to 5GB chunks'"variable, but about this speed.

If any of the drives in my unit fail, I'll have to wipe the others and start again'"which I'm happy to live with. Replacing the failed drive should be straightforward, because I bought it locally (and cheaply) from a generic computer parts supplier. It's easy to do, but many, many other configurations are available if you'd rather not screw the drives in yourself. Do watch out for the extra shipping costs you may incur by shipping a heavier item. 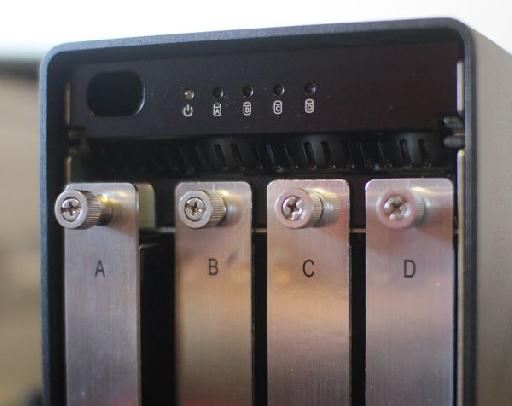 With the front cover off and one of drives pulled out a little.

The interface is the thing, and the drive even includes a cable. There's no other easy way to get massive data transfers on every modern Mac, and USB3 doesn't cut it past a couple of drives. Spec sheets for common 4-bay USB3 RAID boxes are advertising 'up to' 300 MB/s, but this is giving me twice that in real-world speeds. No contest.

There are competing RAIDs out there, but few options for a 4-bay empty case that takes your own drives. It's affordable, fast, reliable, and gives any modern Mac access to fast, huge storage. Recommended for video editors. Look to the more fault-tolerant RAID 5 edition if you have frequent hard deadlines, though.

Dream It. Do It.
Do you want to learn Advanced Tips and Timesavers?
Yes, I want to learn!
No Thanks, I just want to read the article.
Feedback
How are we doing?
We'd love your thoughts, feedback and questions regarding our new site. All feedback is appreciated!
We do not respond to this form! If you need support, please visit our support page.
Thank you for your input!
Your message has been successfully sent
Course Advisor
Don't Know Where To Start?
Ask A Course Advisor