All Articles Review
Review: Parallels Access
Hollin Jones on Tue, October 8th 0 comments
Language
Many Mac users will know of the existence of Parallels which lets you run Windows on your Mac. And Parallels Access, allows you to control your Mac using an iPad. Hollin Jones puts it into touch.

Parallels is one of two big developers offering consumer virtualization apps that allow Mac users to run Windows, Linux and other operating systems in a window inside OS X. By and large, this works incredibly well, offering near-native speeds for many simpler tasks, which is pretty incredible when you think about it. Now the company is getting more heavily into the mobile arena with the release of Parallels Access, a set of tools designed to help you 'applify' (sorry, their term) your Universe.

There is a substantive difference between apps designed for touch interfaces and apps designed for the more traditional computer desktop. This is underlined all too clearly by the less than stellar results of attempts to merge the two, notably in Windows 8, which claims to let you use suites such as Office using touch, but still has practical limitations. The fact remains however that we are using iPads more and more, but show no signs of abandoning our Macs and PCs in huge numbers either. So is Parallels Access a successful blending of the desktop and mobile worlds?

Before we decide that, let's look at some of the details, and what it's actually supposed to do. Essentially, Access is designed to let you use desktop apps in the iPad environment. It does this by providing a souped-up VNC service allowing remote control of your PC or Mac, with some clever additions.  You'll need to download the app to your iPad from the App Store, and install the companion software on your Mac or PC to enable it to work. You don't need Parallels Desktop, though its apps can be run remotely too if you have it.

Early on, we hit something of an issue. You have to create an account on Parallels' website in order to be able to use Access. You have to sign in both on your computer and your iPad to enable communication between the two. Access costs $79.99 a year to use, which seems very expensive. The problem is, the only reason I can figure for needing to sign in is to check that you have paid. Nothing significant concerning the functionality of the app is sent via Parallels' servers, so it's merely a security measure. Then there's the cost. I'd always thought Parallels was pretty reasonable as far as pricing went, with the very latest Desktop 9 priced at the same $79.99 for a perpetual license. That seems like great value to me. This, much less so. Especially when there are other VNC apps like Remoter available that do an excellent job for a small fraction of the price. 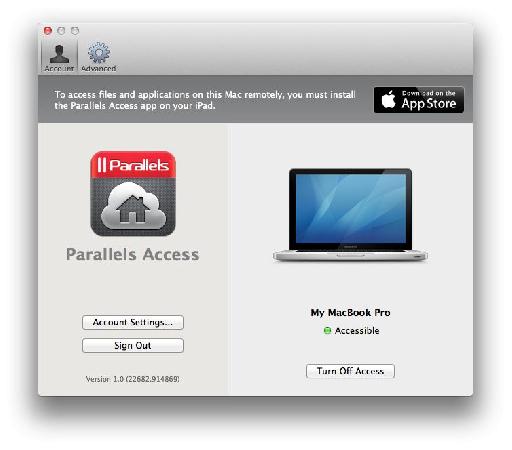 You have to sign in to Parallels on your computer and your iPad for the purposes of authentication.

So if you can get past the pricing issue, what makes Access special? Well, it is a very good VNC app, with a clever Launchpad-style interface that lets you launch apps both from OS X and from inside virtual machines on your iPad. They are the same apps you'd see while sitting at your computer, just sized appropriately to the iPad screen. Parallels has done some clever interface stuff, so you can call up an app switcher to show all running apps, all open windows and documents, and flip between them. iPad-style copy, paste and drag works in the apps and you can copy and paste between the iPad and computer, which is nice. 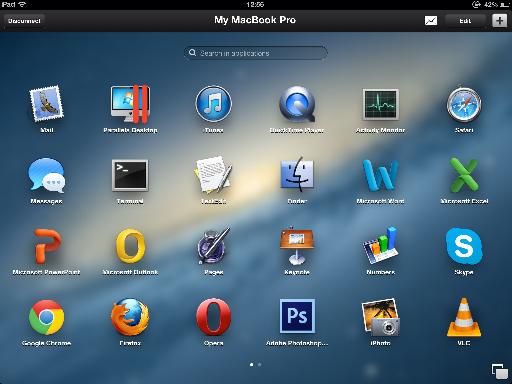 You get a Launchpad-style application launcher which can be tailored to suit you, and can also include apps inside virtual machines.

You can activate mouse mode, perform left and right clicks and even drag and drop using different types of taps and drags on the iPad, and SmartTap and the magnifying glass make it pretty easy to select stuff inside any app. It's not quite as precise as it might be, but then this is often the case with iOS itself. Certainly it's as good a way to interact with your desktop from an iPad as currently exists. 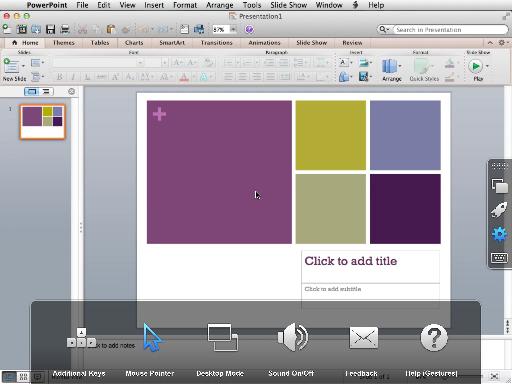 Get comprehensive VNC control over your apps, which are sized to fit your iPad's screen.

So how about some real world performance examples? I run an Airport Extreme 802.11n network at 5 GHz, which is nice and speedy, and communication between the Mac and the iPad was snappy. It didn't seem to suffer when I switched down to the regular 802.11g network, which is good news for those with slightly older hardware. Loading up an HD QuickTime movie it was able to stream it perfectly, complete with sound. When I tried this with my other VNC apps, the streamed video looked much more compressed and didn't transmit sound. Of course there are many other ways to stream video from a Mac to an iPad, but Access made a good job of it. 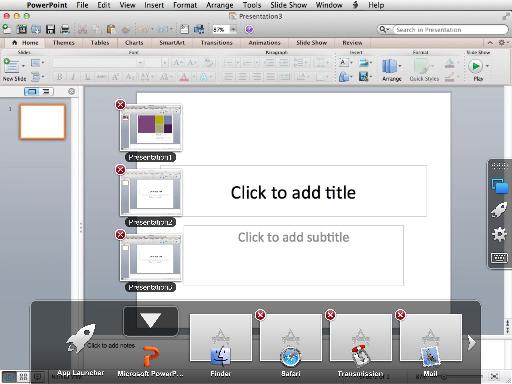 There's a clever stack system used to let you flip between open documents and apps.

Next I tried using Word, and as with all apps, Access sized it automatically to fit my iPad's screen. Using Office-style apps is always a bit fiddly, even when they have been designed for iOS (I'm looking at you, Pages), but the experience here is decent: features like the ability to drag, copy and paste are useful. Testing it with Logic seemed pointless because Logic X has its own dedicated iOS app now, so I tried it out with Reason and it worked well. Of course the screen is somewhat compacted, but using the various interface tools I was able to use the software remotely. So if I was in another part of the studio for example, I could call up some new modules or change some settings over Wi-Fi.

Who is it for?

That's a good question. This is undeniably a great VNC app, and remote controlling your desktop from your iPad can be amazingly useful. I do it all the time. Access is probably the most fully featured VNC app around at the moment but the price is going to be a big hurdle for many people. I'm not convinced that $79.99 a year is justifiable for essentially giving you access to your own software running on your own Wi-Fi network. I know that developers are under a lot of pressure to lower prices and it's not always warranted, but in this case I wonder if a rethink is maybe needed. There is a 14-day trial available at least, so you can check it out for yourself and decide if this is the software for you.