GarageBand for iOS has come an extremely long way since its introduction. In its latest iteration, it has transformed into a full-fledged DAW. It’s been pretty amazing watching the OS  X version mature over the years, and the latest iOS version is on pace to make the OS X version (if it were a sentient person) very jealous. There are a TON of new features to discover, but here are my top 5 that help GarageBand transition from an ‘introductory program’ to a full-fledged music production machine for iPad and iPhone. 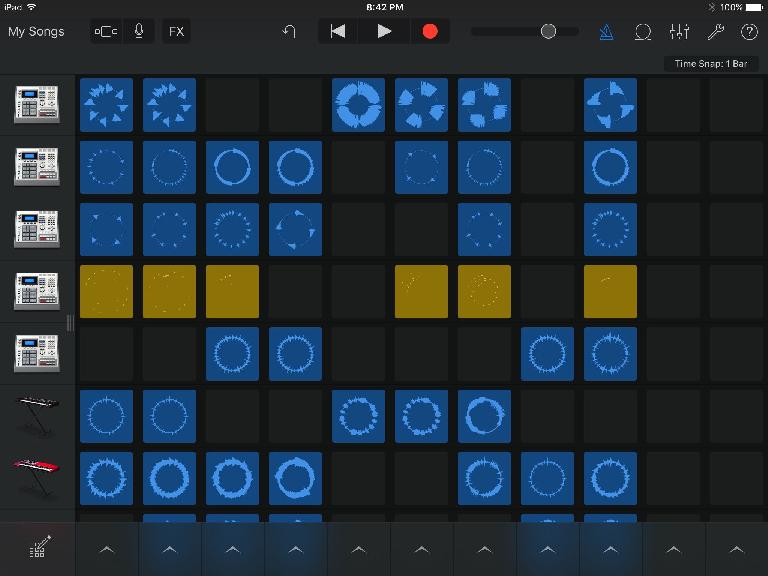 Let’s not put this one off until the end, because it’s a huge piece of news if you haven’t tried it out yet. GarageBand now includes a performance grid that allows you to drag, drop, arrange, and record ‘live loops’. You can utilize the built in Apple Loops library (which includes a sizable upgrade for this version) or record your own. You can even import audio from iCloud Drive directly into your loops grid and use it as a loop or as a ‘one shot’ sample.

It’s an amazing system and works similarly to other pattern based loop sequencers. Of course, in the Apple fashion, they’ve simplified the interface and made it incredibly simple to use. With the touch interface of iOS devices, triggering loops has never been easier or more fun. I’ve been playing around with it for a few days, and I’m already swiping my finger across multiple cells to engage/disengage loops, and I’m having a ton of fun interacting with the Live Loops grid with my fingers. Apple clearly put a lot of thought into the way this feature works, and I think it’s only a matter of time before we see it make its way to the OS X version (although the files you create on iOS are already OS X friendly). 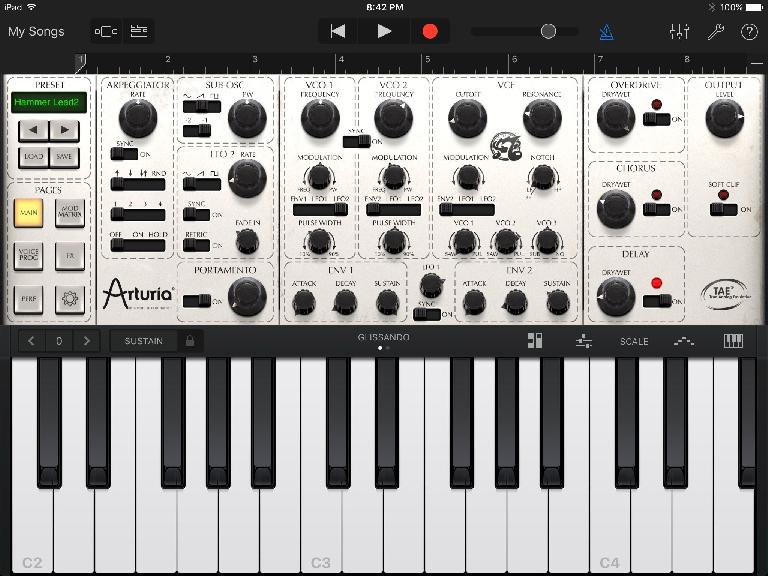 Logically, I knew this feature was going to be thrown in sooner or later, but I just can’t believe the day is finally here. GarageBand for iOS finally includes support for third-party Audio Units in the form of virtual instruments. With such a sizable and fast growing library of music-related iOS apps, it’s only a matter of time until the best of them become AU compatible.

Arturia was ‘first out of the gate’ with the iSEM Synthesizer. The feature works fairly seamlessly. You install the app, if it is AU compatible, it will automatically show up as an option in GarageBand. You can use your AU instrument in both the Live Loops mode or in standard tracking mode. The aesthetic is wonderful, the touch controls make tweaking an instrument a simple process, and the professional keyboardist in me is now counting down the days until we have MainStage for iPad! 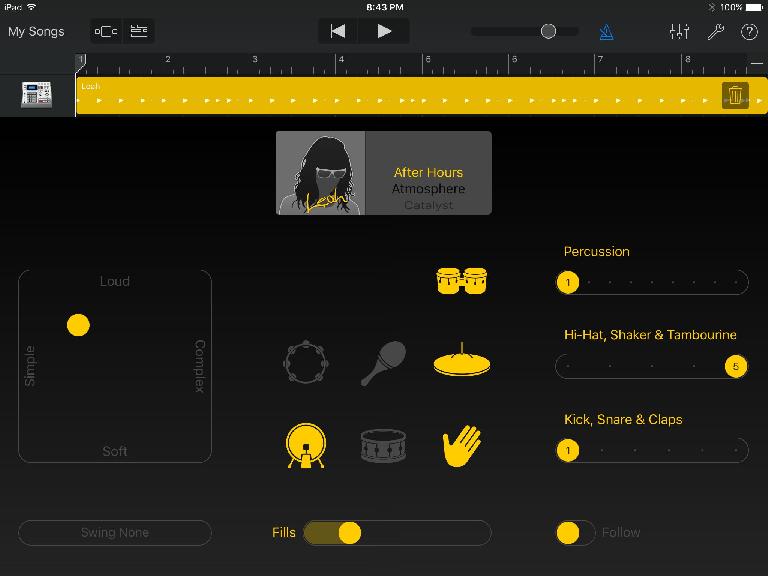 I’ve always wondered how much CPU power and memory Drummer occupied. I mean, when you think about it, it’s a pretty fantastic piece of tech. By setting various parameters for how you’d like your virtual drummer to play, you can have GarageBand generate a drum track tailored to your expectations. The fact that this feature is now available on iOS opens up so many possibilities for musicians who not only like to compose on the go, but practice as well.

I use Drummer with the OS X version of GarageBand on a daily basis for generating grooves to practice over. Having a customizable drummer available with me at all times on my iPhone is just a glorious thing. I’m now seconds away from grooves that can be tweaked to sound the way I want them and I’m reveling in this. You should, too. Check it out for sure. 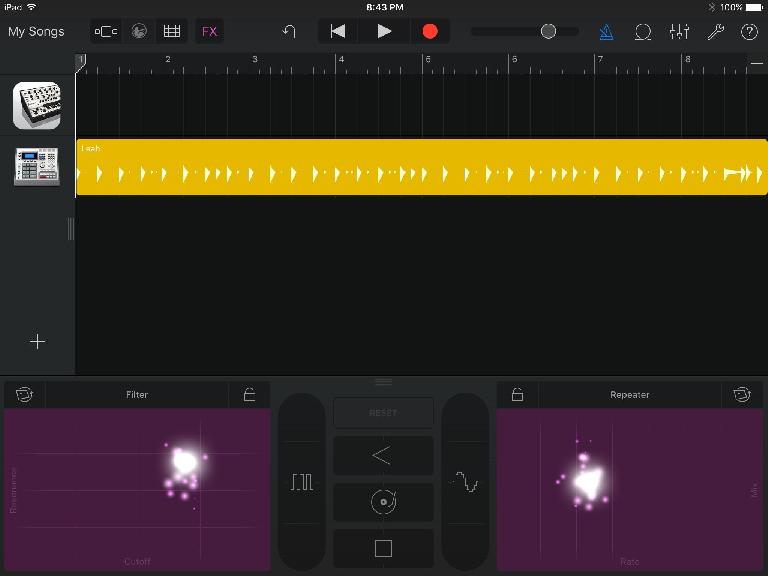 Mix effects work in tandem with the Live Loops function (although they don’t necessarily have to). Essentially, you’ve got access to a whole host of effects ranging from filters to delays at your fingertips. Oh, wait… did I say at your fingertips? Because that’s not all. You can even assign these effects to use the accelerometer in your iOS device and not have to use your fingertips at all.

Mix effects are, for the most part, DJ style effects, and they are a ton of fun to work with. You can get some serious stutter going, reverse, record scratch, bitcrush… the possibilities are endless. When you do use them with the Live Loops grid you can really turn GarageBand and your iOS device into much more of a live performance instrument than a sequencer. It’s definitely a new era for GarageBand users on iOS. 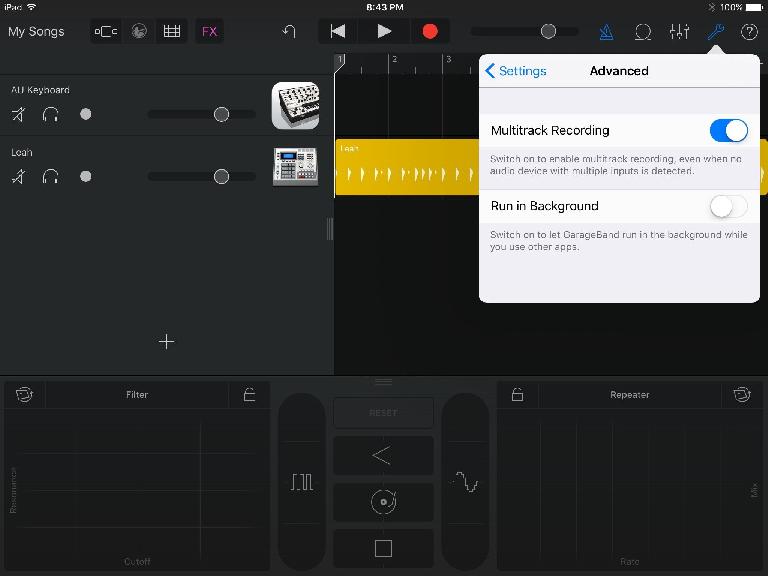 It’s pretty amazing, but one of the biggest landmark features is a simple toggle switch. If you dig down into the ‘advanced’ menu, you can enable multitrack recording. (drops mic)

Okay, okay… I know I’m being a little dramatic here. I know there are a bunch of other options for multitrack recording on iOS. I’ve reviewed a few of them myself, and many of them work really wonderfully and have excellent features. I am, however, someone who recognizes that competition in the marketplace only means good news for those of us who purchase iOS apps and ultimately make music on iOS.

I’m also really excited about the advent of being able to record 32 tracks with just… my… phone. It’s crazy. If you have an iOS compatible audio interface or if your band uses a mixer that is USB class compliant in terms of its audio output, you can now get 32 separate tracks directly to your phone with a simple Apple camera connection kit. It’s just awesome! 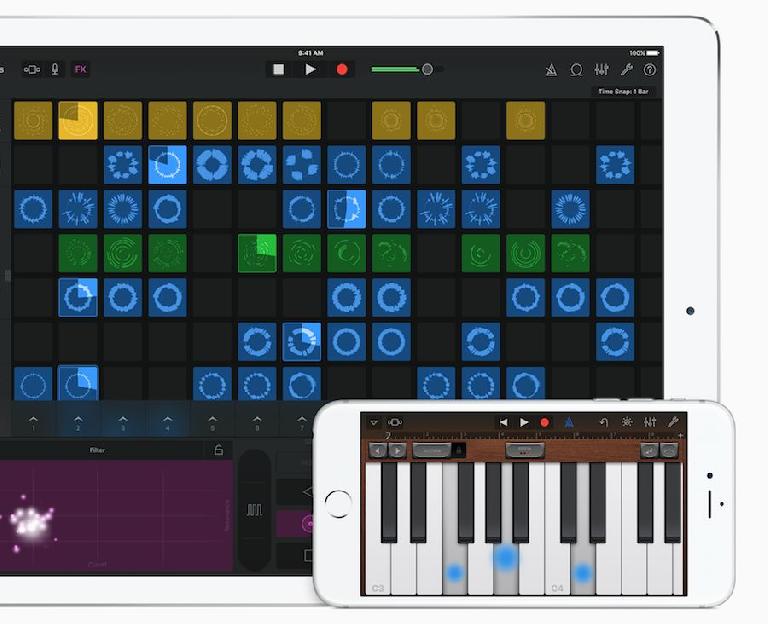 This may be a small feature, and heck, it might get relegated to being called a ‘bonus feature’, but I have fully embraced the world of 3d touch. You can now get a heck of a lot of expression out of that simple touch keyboard, change filter settings, and even shorten the amount of time it takes to create a song using 3D touch.