All Articles Recording & Production
Assembling a Small Microphone Closet on a Budget
Joe Albano on Sun, December 3rd 1 comments
When choosing a microphone or mic collection for your studio, how do you know which route to take? Joe Albano shares his experience and offers up some wise words...

Small studio and home studio owners and operators often read articles describing the enviable equipment lists of large facilities, especially the high-end and vintage contents of their mic closets, and wonder what they can do to build up a mic closet of their own. Well, of course everyone would love to have a collection of classic Neumanns and Telefunkens and other legendary mics, but you don’t necessarily need that kind of gear to be able to make good recordings. With a careful selection of the best of today’s excellent lower-to-medium priced mics, and a little attention to detail in assembling a group of mics that will best suit your specific needs, anyone can have a mic closet that, while small, will have all the tools needed to get great results.

Most small studio operators have probably at one time or another heard or read the traditional piece of advice often given about studio microphones—it’s better to save up and get one “really good” mic than fill up your closet with a bunch of lesser mics. The reasoning goes that that one mic can probably be used on almost every acoustic recording (given that many small studios tend to record via individual overdubs rather than as ensembles), and so it can impart maximum quality to all the acoustic tracks, especially vocals.

There certainly is some good logic to that idea, and if it fits with your recording methodology, and you can afford to buy a “really good” mic (that usually means over $400-$500 or more, $1000 and beyond), it should serve you well in almost every situation. The usual suggestion is to make it a large-diaphragm condenser of the type usually intended for vocals, since that application will likely be both the most common one and the most critical one.

At the lower end, that could be an AT 4033 (or similar), AKG 214, or any of the other newer mics in that price range that provide top-notch sound for reasonable $$$; moving up to ~$1000 range, an AKG 414 or a Neumann TLM 103 (which can serve as an excellent stand-in for the venerable U87 at less than a third of the cost). This type of mic can also work perfectly well on other sources, like acoustic guitar, winds, or strings—in short, you can’t go wrong with it your closet, even if it is a bit lonely in there. 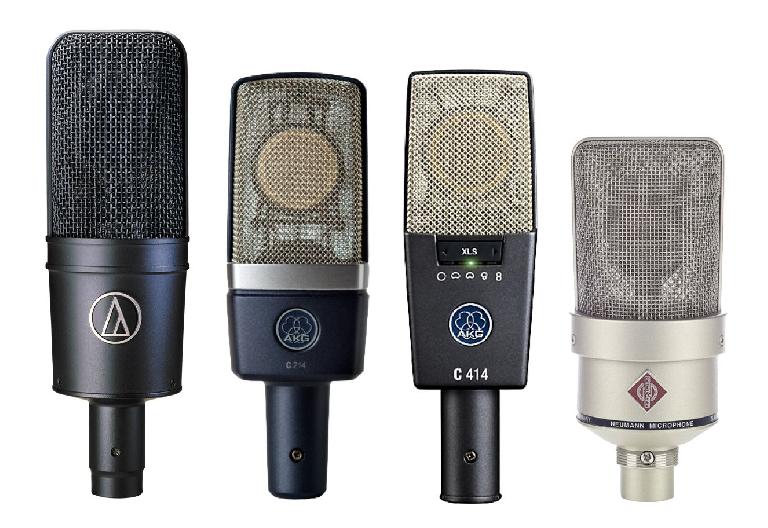 But not every recordist can get by with just one mic, no matter how good—different recording scenarios and specific miking applications may demand a larger and more varied collection. So what are some of the considerations that would go into making the specific choices for a small but tasty mic closet?

Many people  build up a mic closet bit by bit, adding a new mic every now and again, when they have a little extra cash, or a specific need arises. Others might prefer to assemble the collection all at once, to be ready for any of the kind of sessions they anticipate doing. Either way, it’s be a good idea to make up a brief checklist of needs and considerations when deciding on what mics should be a part of your closet. 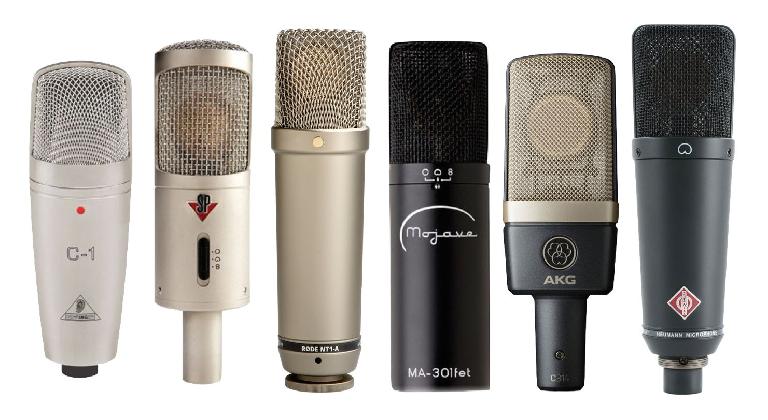 A variety of mics at various price points

Put down all the mics you think you’d have real use for, not just the ones that you know would impress potential paying clients at your studio (that may actually be a consideration if you’re competing with other recording facilities in the area, but ideally it shouldn’t be a primary one). While you’re working out budgetary constraints, don’t forget to factor in all the less glamorous accessories that you’ll need: mic clips and stands, pop filters (for vocal recording), mic cables, and the like. 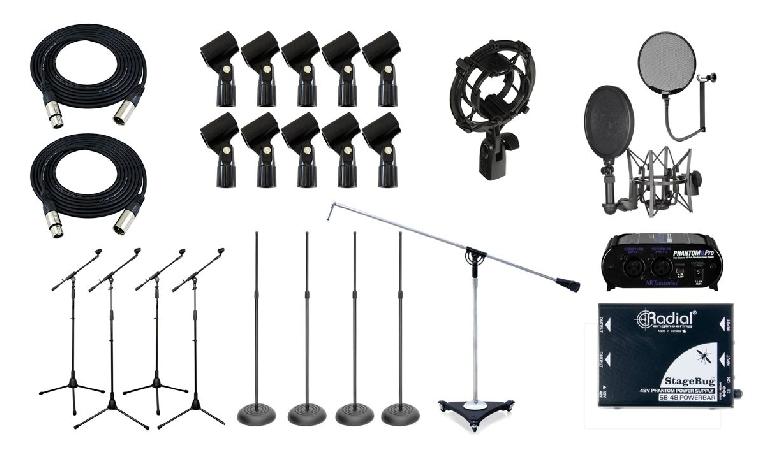 Live Or Overdub -  How Many Mics

The next key consideration could be to determine how many mics you’re likely to need simultaneously. This will impact both your budget—how much you can afford to spend on the best mic or mics—as well as potentially adding to the accessory cost tally. Naturally, if you intend to record full bands acoustically, you’re going to need a proper mic closet, with at least a dozen or so mics: three or four up to eight or nine for the drums alone, plus mics for amps, acoustic instruments, and potentially both lead and background vocals. And don’t forget an interface or expander with all those extra inputs.

But most smaller studios don’t usually take this approach—at least not regularly. It’s more likely a small operation will be recoding acoustic tracks via overdubs, one at a time. But that still doesn’t mean you won’t need more than one mic. Even if your main application is recording lead vocals, you many still run into situations that demand additional mics—a typical example would be the singer/songwriter who plays acoustic guitar.

You can try telling him/her that it’ll be fine to record the guitar in one pass and the vocal separately—and in fact that certainly will provide better isolation. But good luck with that if your performer simply insists he/she needs to play and sing at the same time! In fact he may be right, his performance—pitch and/or timing—may suffer if he can’t do it the way he’s used to. Now if you only have one good mic, and are forced to borrow or press a cheap computer mic into service, thanks to the leakage it’ll inevitably pick, up the whole recording may be at least a little compromised.

I’d suggest at least two decent mics—one really good one, and one merely good one. That way you’ll be ready for a singer-performer scenario. If you happen to have a piano in your studio, them you might want up the count to three—a primary condenser for the vocal, and a pair for stereo piano. Now, if this One+ scenario, the “merely good” mic doesn’t have to be especially expensive—good instrument (pencil) condensers can be had in the ≥$100 each range, and even the lowly SM57 dynamic ($99) can acquit itself surprisingly well in a pinch (though there are much more hi-fi dynamics for just a little more). The point is that you’ll still have best quality for the most critical tracks, and decent quality for the accompaniment and extras.

On the other hand, if your primary recording endeavors are stereo ensemble recordings and field recordings (like a choir in a local church), then you might want to focus on a “really good” stereo pair, even if that means that the “really good” part of your budget leaves less per mic. A couple of mid-priced (±$300ea) large diaphragm condensers could do double-duty as both a stereo pair for live on-location gigs, and as the primary (and secondary) vocal mic for studio sessions.

Variety Is The Spice Of Life...

If you have a little extra in your budget after assembling a list of mics that you expect will cover all your primary session needs, then a second “really good” mic can be beneficial. Assuming you already have a stereo pair that suits your needs, you might want to get another LDC vocal mic to augment your main mic, but one with a distinctly different tonal character—bright where your main mic is warm or vice-versa, or with a distinctly different midrange boost than the #1 mic (or no boost at all for a flatter, more laid-back character).

No matter how good your main mic is, it just may not be a good match for every situation, especially when it comes to vocals. There’s a reason why you see engineers in big studios setting up three or four vocal mics for a singer to audition—it’s not just to show off the depth of the their mic closet, it’s because sometimes a particular vocalist just won’t sound as good as other in the studio’s go-to mic, and another my simply be a better match for their vocal tone—even a less expensive model. (I had one singer who simply sounded better with a $300 budget mic than our $3000 U87). So if your main mic is some kind of Neumann, with the classic Neumann upper-midrange/treble lift, maybe a nice AKG with a more even treble response might be a good alternative (or substitute any mics of your choice for either).

Every situation in going to be different, and the specific choices as to mic models, price points, size of the collection, and particular tonal attributes of the chosen mics being unique for every studio operator. But with a little forethought, planning, and judicious budgeting to make the best compromises for the particular situation, any small studio can have a spot-on mic closet with just enough of the right mics to get big-studio results every time.

Learn the audio concepts every musician and producer needs to get by: https://ask.audio/academy?nleloc=topic/audiopedia
Related