All Articles Review
Elektron Analog Four MK2 Vs Teenage Engineering OP-1
Jade Wii on Mon, December 18th 0 comments
These two multi-talented hardware instruments each have many fans in the music world, but how do they stack up against each other? Jade Wii pits them head to head.

You must be thinking “apple and oranges, you can’t compare these two machines.” When it comes to comparing the Analog Four to the OP-1 we need to look at specific features people might be interested in that they can achieve with both devices in different ways. Even though different they have a lot of similar features: they both have four tracks, they both have sequencers, and they can both be used as a Drum Machine. Yes, the Analog Four is almost twice as much than the OP-1, but its also twice as big, has an analog engine, and has four CV outputs as well as two CV inputs. Does this make it superior? No, it all depends on what you’re trying to get out of the device you choose. 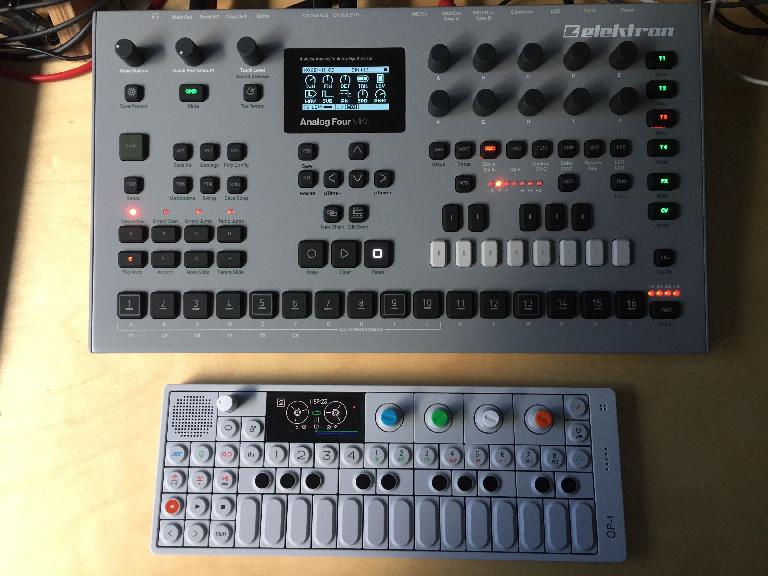 One of the most attractive things about the OP-1 is its size. The OP-1 is a powerhouse of a machine. It can sample, it has Tape Effects, it has a two octave keyboard, multiple Synth Engines, different types of sequencers and an internal battery that lasts HOURS. Each tape can be layered for endless possibilities, you can make complete drum tracks on it, and later export your four tapes into your DAW for further editing. The Analog Four on the other hand is quite a lot bigger, but that’s ok because it’s meant to be a desktop unit. The new MK2 is beautifully tilted, which makes it a comfortable workstation, the new design is slicker but weighs about the same as the previous unit. 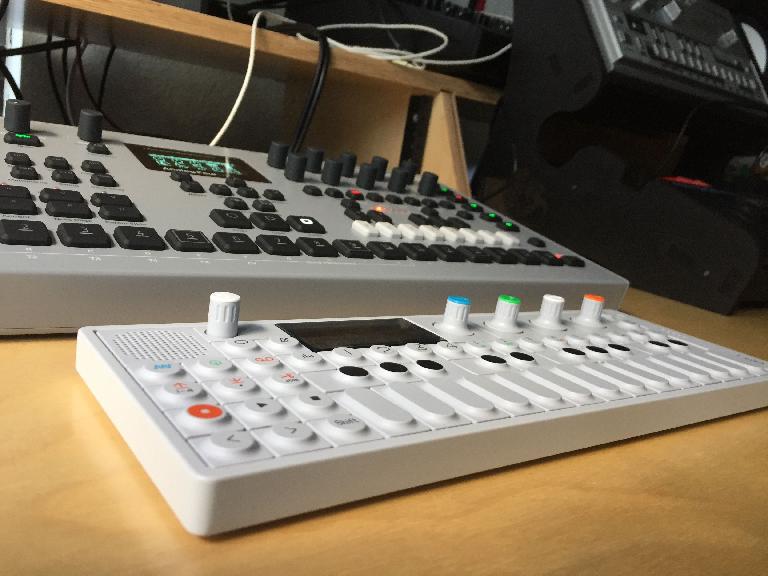 I Want A Groove Box

A Groove Box is a device which allows you to make complete tracks without having to reach for anything else. On the A4 it’s difficult to have one track dedicated to drum duties because at some point you’re going to want to layer a Kick and a Snare on the same step and you’ll be forced to use another track for that. With Parameter Locks its possible to still make a melody on that other track, but you’ll have to careful decide which step goes where so you’re not faced with voice stealing. This can be quite stressful when you have a certain idea in mind that you want execute, but can’t because of hardware limitations. I guess making drums on the A4 is kind of a plus if you think about it, it’s advertised as an analog synth, so judging it for it’s ability to make a complete drum track is a bit unfair, but this is a head to head comparison, so anything goes. 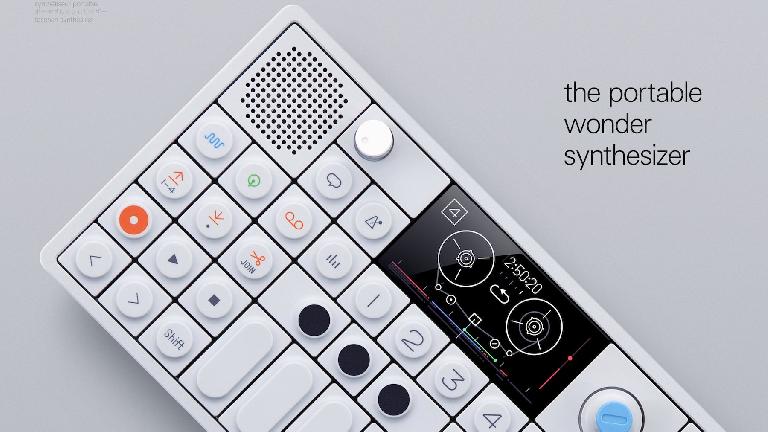 We’ve already discussed that the A4 is almost twice as much as the OP-1, but the thing with owning one Elektron box is the inability to restrain yourself from completing the “Dark Trinity” or what we should probably now call the “Gray Trinity”. So the A4 isn’t the best Drum Machine, that’s ok, you could add an Analog Rytm to your setup, and while you’re at it you might as well pick up an Octatrack. It adds up quickly huh?  Nothing wrong with being an Elektron Fan Boy/Girl if you can afford it. If you’re looking for an all-in-one machine, I wouldn’t hesitate to suggest you go for the OP-1. If what you want is an analog synthesizer with an amazing sequencer that plays well with Modular than the A4 might be more up your alley. 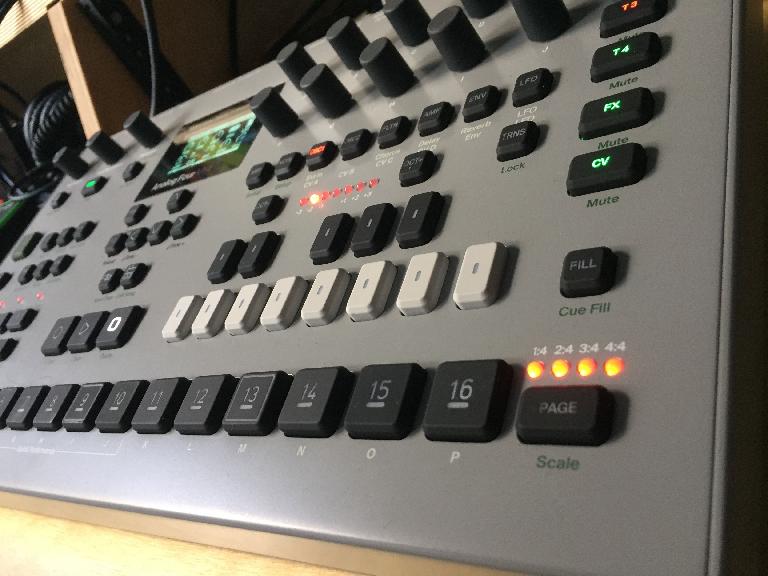 Now here is where the main differences take place. On the back of the Analog Four we have a Stereo Main Out as well as four separate Outs for each of the the four tracks, we have one Stereo Audio In which allows us to send audio from another Keyboard or Drum Machine into the A4 where we can then apply internal effects to incoming sound. Four CV Outputs label A,B,C,D can be set to being Gates, Triggers, Clocks, or Pitch in no particular order. Full size MIDI in, Out, and Thru, a USB port for upcoming Overbridge, Two Exp/CV Inputs and Of course DC In.

The OP-1 has one 3.5 Stereo Output, and one 3.5 Stereo Input as well as a USB Mini-B. Apart from its MIDI duties, through the USB port is how we charge the unit. The A4 has a pretty lengthy list of Ins & Outs, it feels like a studio-worthy piece of hardware. The OP-1 is what one would call an “Apocalypse Synth” - that piece of gear you would choose to take with you in case you had to jump ship and leave everything else behind.

Playing Nice With Others

One of the things that the OP-1 struggles with is playing with anyone outside of its family. The OP-1 plays great with the Teenage Engineering Pocket Operators, but when it comes to integrating it with other gear it’s a bit difficult because it doesn’t have designated 5 Pin MIDI or a 3.5 IN/OUT. This means that in order to sync the OP-1 with other gear you will need to use a MIDI USB Host. Due to the overwhelming Ins and Outs the Analog Four it’s easy to see who the clear winner in this department is. With full size MIDI and the ability to sequence up to two CV tracks (by layering with one of the four tracks) the A4 is an all around better “team player”. 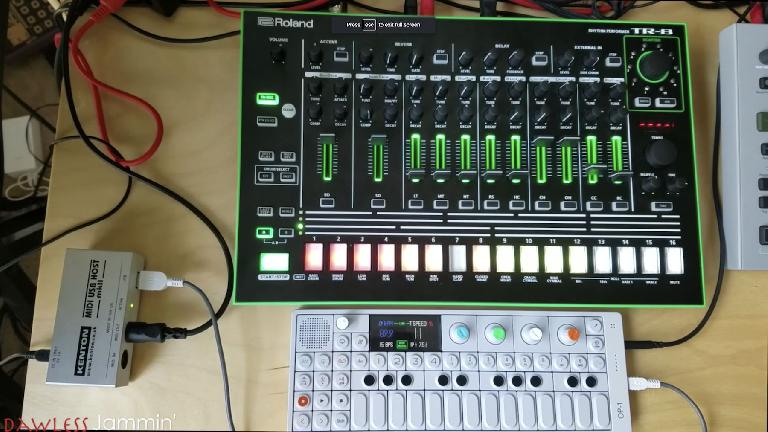 Elektron has kept quiet about their upcoming Overbridge features, but that only means their developers are working hard to make sure the A4 works seamlessly with your DAW. Once Overbridge is available you will be able to monitor your four tracks directly into the computer via USB without the need for an interface. Overbridge will give you more control over editing parameters as well as better visual feedback of what’s going on as you're twiddling away.

The OP-1 can be used as a MIDI controller, its four tracks can also be exported as audio for further editing in your DAW, but it doesn’t feature audio over USB. 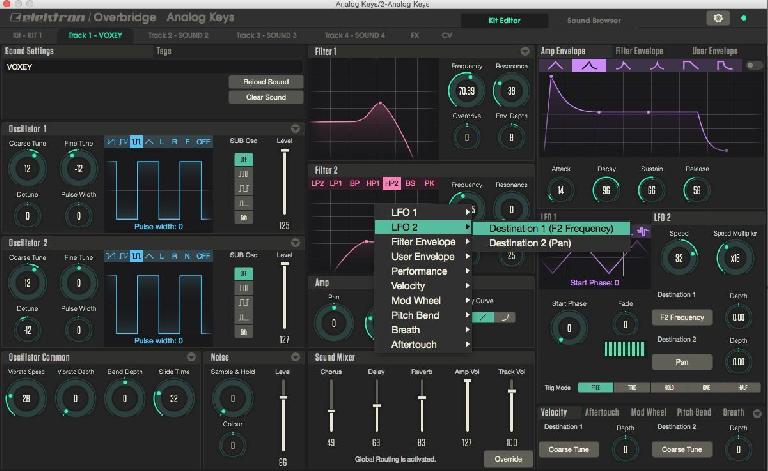 The Elektron Analog Four and Teenage Engineering OP-1 are different beasts with similar functions, what it all comes down to is your preference, workflow and budget. Whatever you end up deciding on, these are two great synths and you can’t go wrong with either.

Sharpen up your Elektron skills with these pro video courses on all their products. https://ask.audio/academy?nleloc=application/elektron
Related 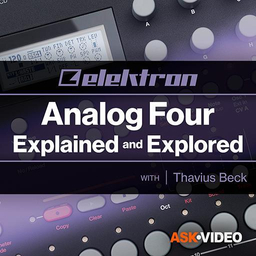 Dream It. Do It.
Do you want to learn Analog Four Explained and Explored?
Yes, I want to learn!
No Thanks, I just want to read the article.
Feedback
How are we doing?
We'd love your thoughts, feedback and questions regarding our new site. All feedback is appreciated!
We do not respond to this form! If you need support, please visit our support page.
Thank you for your input!
Your message has been successfully sent
Course Advisor
Don't Know Where To Start?
Ask A Course Advisor