All Articles Recording & Production
Expanding Your Mobile UA Apollo Recording Rig Using Optical Preamps
Rich Tozzoli on Wed, September 27th 2 comments
If you've never taken advantage of optical preamps to expand your UA Apollo mobile recording rig, you could be missing out! Rich Tozzoli shows you how it works and how it can help you.

One of the reasons I use Universal Audio Apollo Twin MK II and Apollo 8p recording interfaces on mobile sessions is their ability to quickly expand input channels. By utilizing the ADAT lightpipe connector on the back of each unit, they can accept up to 8 additional channels optical preamp. Let’s take a look at how you can easily hook it up and why you may need some more preamps in your arsenal.

One thing I’m lucky to do is write music wherever I am in the world. From St John in the Virgin Islands to the Blue Ridge Mountains of North Carolina or in studios, I take what inspires me from the land, sky and sea and put it into my TV music. But that means you need to have gear with you, and that’s not always so easy. Often when on the road, less is more - especially when it comes to cables.

That’s why on most small portable mobile sessions, I take along an Apollo Twin MK II Thunderbolt audio interface and a laptop. It has 2 x XLR ¼ inch combo jacks, as well as a ¼ Hi-Z input on the front. With a single Thunderbolt cable into my Macbook Pro, I’m up and running. Or, when I need to expand, I take my Apollo 8P and a preamp, giving me up to 16 inputs.

But more often than not, 2 channels of input is not enough to work with. By using a single ADAT lightpipe optical cable and an external preamp with an optical output, you now have up to 8 more channels to work with. Think about it - with that single small optical cable for the preamp and a single Thunderbolt cable for the laptop, you can now have up to 10 channels of input with the Twin MK II, and 16 with an Apollo 8p.

There are a variety of preamps available that feature A/D D/A conversion with optical outputs. They include Universal Audio’s own 4-710D, Audient ASP880, PreSonus DigiMAX D8, Focusrite Scarlett OctoPre and more. I happen to use a variety of them, such as the Grace Design m108, the UA 4-710D and a Focusrite ISA 428 and ISA 828.

To connect any of these preamps to expand your portable Apollo system, just plug the single optical cable into the ADAT optical output of the preamp, and then into the Optical In of the Apollo MK II, or the IN (1) of the Apollo 8p. Now, it’s time to make a few quick configurations.

Note that when using an external preamp hooked up with ADAT optical lightpipe, that preamp becomes the clock master - not your UAD unit. What you need to do is open the UAD Console 2.0 Setting tab and in the Hardware section, select ADAT for your Clock Source and set the SAMPLE RATE to be the same as your external preamp. If you have an Apollo 8P, you’ll notice the EXT white light is lit up on the front panel, indicating your sync is connected externally to your preamp. 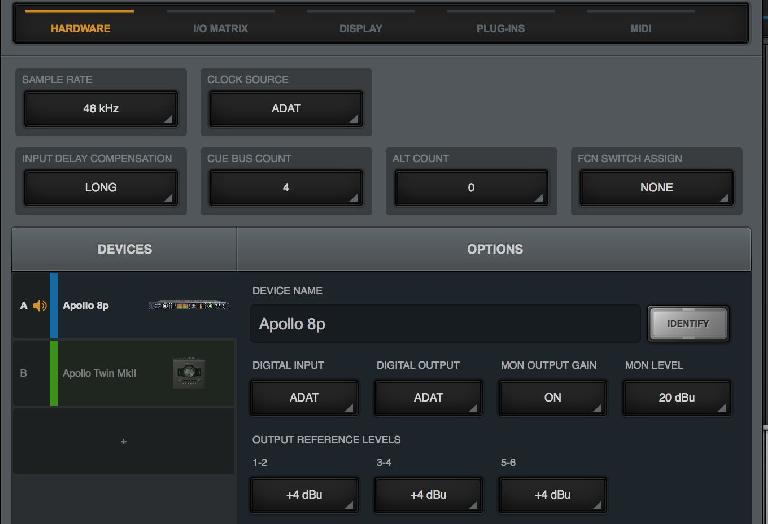 Remember, it’s  important that both the preamp and the Apollo be set to the same sample rate. If they are not, you may hear these small ‘ticks’ in the audio, and/or your audio will play back at a funny speed.  I tend to always work at 48kHz, so that’s never a problem. However, ADAT lightpipe, when using a single cable, is limited to 44.1 or 48kHz, so that’s just something to be aware of.

Once you’ve made all your connections and set up the software correctly, the UAD Console will display up to 8 ADAT channels, which will now feed into your DAW. Unlike the Apollo channels, the input levels will be controlled via the external preamp itself. Only the levels will show up in the Console metering above each channel. 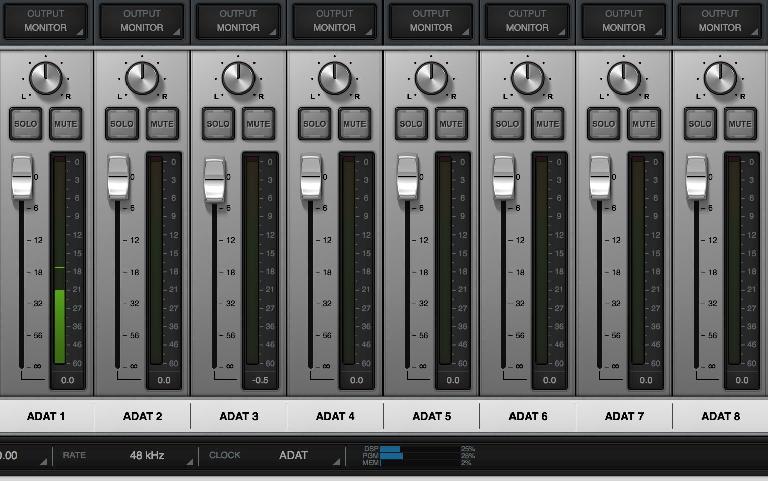 While you can cascade up to 4 Apollo interfaces with one system, I turn to external preamps because I like to have sonic options. For me, I use the Grace m108 8 channel preamp on the more acoustic based sessions because of how pristine the preamps are. While I do like how the Apollo 8p and Apollo Twin MK II’s preamps sound, I prefer the Grace when it comes to things like acoustic guitar, acoustic bass, percussion and strings.

For drums, I like to use the Focusrite ISA 428 or 828, because they have variable impedance on all channels. That lets me dial the preamp in a bit more for the relevant microphone, and sculpt the tone. The same diversity applies to the UAD 4-710d. It has the ability to blend Class A FET preamp circuitry and Class A triode tube circuitry. That’s what I prefer on guitar amps and harder electric sessions, because I just find the sound to be thicker and creamier than any of my other preamps.

Aside from the sonic options, using external preamps lets you easily up your channel count. So with something like my Grace m108 and the Apollo Twin MK II, using the optical input gives me a total of 10 channels in a compact, powerful package. When using it with my Apollo 8p, there’s 16 channels available. That’s the mobile package I take on the road when recording live drums, guitars, bass and vocals (and anything else). For example, you capture 8 channels of drums, 2 channels of guitar amp, a bass DI, vocal mic and acoustic mic, and a stereo keyboard, all while having one extra channel left over.

By using external preamps with your Apollo Twin or 8p system, you can not only expand your track count, but give yourself more sonic options for the production. Just examine what external preamp works best for your needs, pick up an optical cable, and get to work somewhere exotic!