Roland's TB-03 gives producers the sound of the classic TB-303 in a smaller, portable model. The LED screen simplifies programming and the new Overdrive and Delay effects add originality and character to the machine's already unique sounds. There's never been a better time to add some acid into your tracks and the TB-03 makes programming bass lines a breeze. Here's a tutorial on how to get started programming the TB-03 and use the machine's new effects. Start by erasing a Pattern and clearing out space to program a new one. The TB-03 has two different Modes, Pattern Play and Pattern Write. Switch the Pattern Knob to Pattern Write. Next hold down the Pattern that you want to clear by using buttons one to eight.

2. Changing the Number of Steps in a Pattern

By default, each Step is a 16th note. To change to Triplet Mode, hold down the Function button and press the Triplet button to enter Triplet grid. Check and adjust the tempo by quickly pressing the Tempo button. The Tempo is displayed on the LCD screen. Use the value knob to set the value you want the pattern to be.

Press Pitch Mode, then use the Keyboard buttons (one to eight) to enter the Pitches. The octave of each note can be changed by pressing Transpose Up or Down, then pressing the note key. When finished programming notes, press the Function button.

Press the Time Mode button and use the note selector buttons; the note, tie or rest to enter the timing. Check the time by pressing the Time mode, then press the Tap button to check the data of each note and Function to finish. 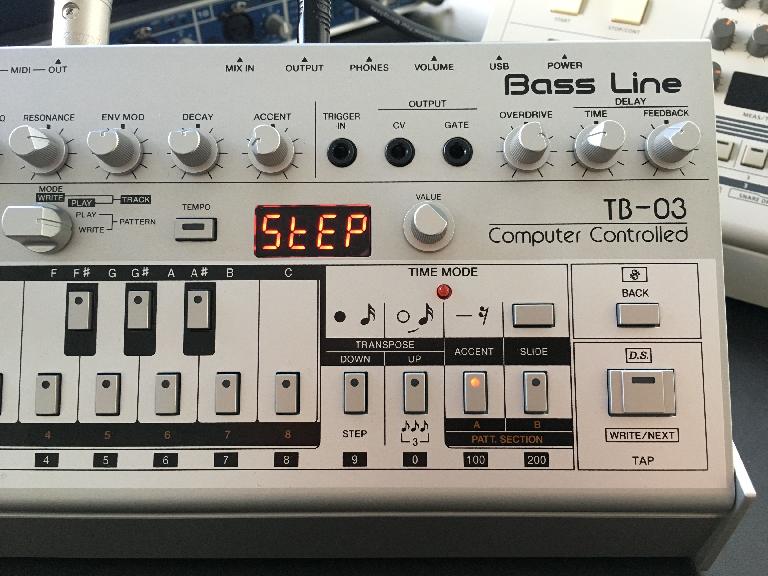 Beginners may find it easier to work in Step Recording Mode, a new mode that was added on the TB-03. This Mode allows you to program in notes, their timing and slides and ties by using the Step number on the display. 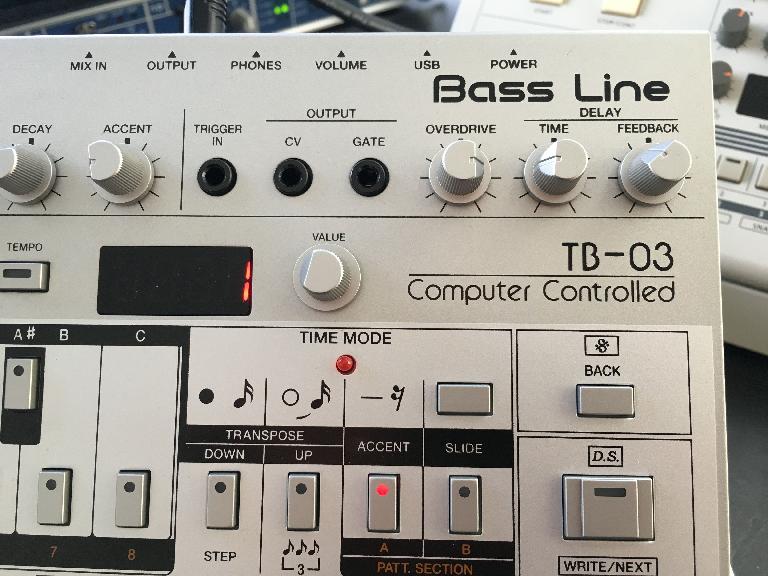 The Overdrive Types are as follows:

Apply each type of Delay and the Reverb by adjusting the Time and Feedback knobs in the Delay section. I recommend keeping the Time knob fairly low, otherwise the effects may quickly get out of hand!

The TB-03 takes a bit of time to learn to program, but once you understand how to use the machine it's simple to create interesting bass lines. Programming in patterns on the TB-03 and using the effects can be a lot of fun and an easy way to start building a track. The TB-03 is a great machine to use on its own and its even better when paired with one of Roland's drum machines. Here's to happy programming and acid lines in your tracks!

Dream It. Do It.
Do you want to learn TB-03 Explained and Explored?
Yes, I want to learn!
No Thanks, I just want to read the article.
Feedback
How are we doing?
We'd love your thoughts, feedback and questions regarding our new site. All feedback is appreciated!
We do not respond to this form! If you need support, please visit our support page.
Thank you for your input!
Your message has been successfully sent
Course Advisor
Don't Know Where To Start?
Ask A Course Advisor