All Articles Guitar
Guitar Tips: In The Studio Vs Playing Live
Rich Tozzoli on Fri, January 8th 0 comments
Language
OK. So, you don't need to be a god to play guitar well... and here Rich Tozzoli shares tips and techniques on how to approach shredding your axe successfully whether in the studio or playing live.

Playing guitar live and recording in the studio is the same thing, right? Well, that is not necessarily so. Let’s examine some of the ways that they are different, and how you might approach each one to make yourself the go-to guy—or gal.

Of course, playing live and in the studio begins (assuming you have some chops) with making sure your gear is top notch. Having been blessed to both play on tours and behind the glass, your gear takes much more of a beating on the road.

I’ve had to take off guitar necks in the middle of the Caribbean because the humidity made my guitar unplayable. So always have the proper tools with you, because there might not be any music store nearby. Bring extra tuners, string winders, screwdrivers, Allen wrenches, small needle nose pliers, flashlights, etc.

Ernie Ball for example makes a useful Musician's Tools kit that you can get for around $30. It features a string cutter, peg winder, 6-in-1 screwdriver, ruler and so on. 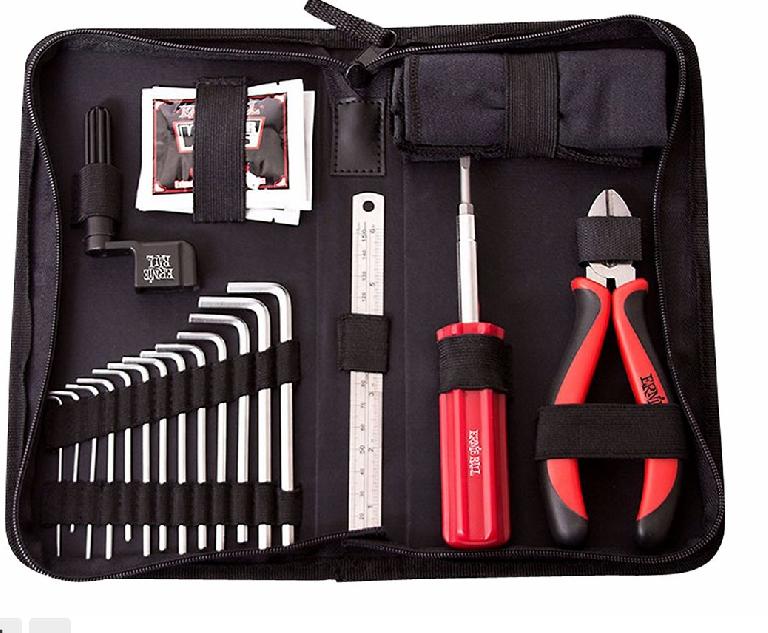 This ‘road’ pack could then remain in your case when you go to studio gigs. Having your guitar properly intonated is of course important live, but not nearly as important as when in the studio.

There’s nothing worse than recording a guitar player (or myself) that has a badly intonated instrument. That’s because in the studio, everything you record is amplified and examined under a microscope. Whereas live, it can slide by a lot easier. So make sure your instruments are set up before you hit that recording session, or you might not get a call back.

Ok, this of course gets into personal taste and feel, but studio amps and live amps in my world are a totally different game. Live, depending on the size of your show and/or crew (or not), you must consider the tradeoff between portability and power. I’ve found that on the road, I let my pedal board do a lot of the ‘heavy lifting’ with sound. So that means I incorporate more pedals to cover things like varieties of distortion, tremolo and reverb. This lets me travel with a smaller, lighter amp, and I’ve even gone to the extreme on some shows of just using a small transistor Fender Champion amp (and I’m a tube guy all the way). The reason being, its small, light, and has no tubes to break. I can get it to sound quite good, and it always turns on. The only thing is I have to turn the treble way down to around 2 (no joke), because they are too bright for my taste.

In the studio, it’s a whole different ballgame. I tend to bring a variety of amps, some of which I would never take on the road. My main go to for distortion is my Mesa Boogie MK IV head, which can scream. Therefore, I don’t rely on the pedals to get my edgy tone, though I do still turn to them for variety. For cleaner sounds, I bring something like my old ’62 Gibson Falcon, which has an unbeatable reverb and tremolo. For vibrato I have a ’66 Magnatone M10A, and for super clean a Fender 4X10 Hot Rod Deville.

Of course, I don’t travel with all of them, but the point is, there is much more control to be had in the studio than there is live. Also, typically, you’ll need more of a variety of tones when recording records or TV cuts, etc.

Aside Of Amps And Intonated Instruments

To me, having good reliable amps and intonated instruments is a no-brainer. But the other part of the live versus studio playing issue has a lot to do with mindset. There have been way too many times I’ve had superb live players come into the studio and not be able to cut it. The reason is often their ego. If you want to be a great session guy, it’s critically important to let go of your ego.

To Serve And Protect

When going in to make a recording, it’s all about the song, and nothing else. You are there to serve its purpose, not to show your chops. So if all that is called for is a G chord, then just deliver the best G chord you can.

Another thing I’ve learned over the years is to simplify my parts in the studio.  Since I have to often record myself for TV cuts, I’ve found time after time that keeping it simple pays off. As long as the part is tight in terms of time, and tasty in terms of tone, it always works in hindsight. I’ve certainly had instances where I’ve backed myself into a corner trying to play something complex, only to take the time to ‘undo’ it afterwards.

That’s not to say you shouldn’t push yourself to try new things that may be hard or challenging, but I’ve discovered the time for that is during rehearsals or your own practice time, not during the gig or in the studio. Of course I’ve had instances live where it felt great to go for certain things, but I would take the context of the moment into consideration, and probably not try that in the studio with everybody relying on me to get the part done.

Remember, the live gig (unless it’s being recorded), goes by in a flash. So if mistakes happen (which they do) or the guitar is not properly intonated (which it can be), it's ok. But in the studio, it’s forever, as the term goes. Bring your A game with you, have all your instruments freshly strung and set up, bring the good amps, loose the ego, and most importantly, serve the song. Chances are much better that you’ll get that call back for the next session.