All Articles News
Has Flock Audio Made The World's Most Advanced Analog Patch Bay?
Hollin Jones on Tue, March 26th 0 comments
Is this the world's most advanced digitally-controlled, 100%-analog patch bay routing system? With a dedicated app and 64-point connection, Flock Audio thinks it is.

EDMONTON, AB, CANADA: Pro audio manufacturer Flock Audio is proud to announce availability of its innovative PATCH System — surely the world’s most advanced digitally-controlled, 100%-analog patch bay routing system, thanks to a killer combination of (PATCH APP) software and 64-point connection-providing (PATCH) hardware working together in perfect harmony, allowing anyone to easily control analog audio routings without having to resort to the use of manual patch cables. 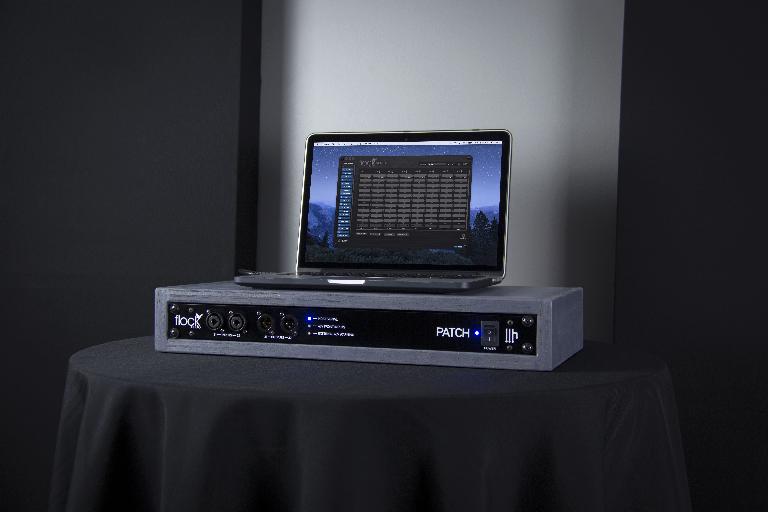 The PATCH hardware features four connectors — two INPUTS (on Neutrik XLR/TRS Combo jacks) and two OUTPUTS (on Neutrik XLR male jacks) — perfectly positioned on its front panel, meaning users can conveniently and easily integrate any analog audio equipment or instruments into their recording setup that they might need to audition. As such, they can quickly redirect INPUTS 31-32 and/or OUTPUTS 31-32 from the rear side of the PATCH hardware by clicking the FRONT INPUTS or FRONT OUTPUTS toggle buttons located in the lower section of the equally easy to use, easy on the eye PATCH APP software GUI (Graphical User Interface), instantly receiving notification that those rear side outputs are no longer actively functioning.

Front panel-redirected INPUTS 31-32 are able to have 48V phantom power supplied to their connectors using the PATCH APP software, which will be visually confirmed by the front panel-positioned 48V PHANTOM POWER LED (Light Emitting Diode) illuminating as a slow-fading blue indicator to notify the user to not plug or unplug any audio equipment until the 48V phantom power is disabled. 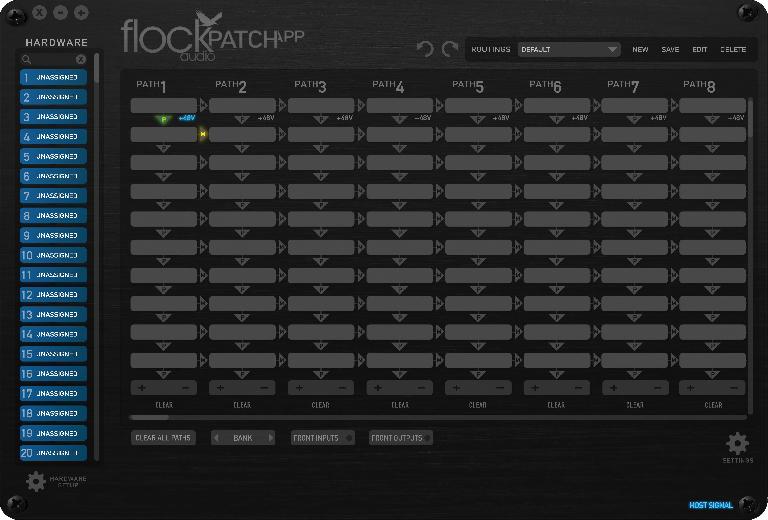 Three further coloured LEDs complete the simple- and sleek-looking PATCH hardware’s front panel, also assisting the user with welcomed visual notifications — namely, HOST SIGNAL (illuminates solid blue when the PATCH hardware is connected to — and communicating with — the associated CPU); EXTERNAL 48V WARNING (illuminates as a flashing red indicator when any connected preamp has its 48V phantom power activated as it’s not necessary to activate 48V phantom power on any connected preamp since the PATCH System supplies its own onboard 48V phantom power); plus POWER rocker switch (with an associated blue LED indicator).

Last but by no means least, the PATCH System has 32 channels of 48V phantom power built right in so users can activate 48V phantom power to any of its input channels for powering condenser microphones the way they were intended to be powered. It’s possible to toggle the 48V MASTER — ON or OFF — and ALLOW or DENY the ability to connect 48V phantom power on any input connected to the PATCH System using the 48V SAFEGUARD feature via the PATCH APP; as such, it’s safe to say that it’s impossible to accidentally enable and/or damage any phantom-powered prized microphones — much to the relief of any serious studio owner, obviously!