NASHVILLE, TN, USA: following a successful showcase at The 2019 NAMM Show in Anaheim, CA (January 24-27), high-quality, professional-grade musical equipment provider iCON Pro Audio is proud to announce availability of Platform Nano — an aptly-named addition to its critically-acclaimed modular Platform series of MIDI/audio control surfaces (and associated add-ons), this time aimed at engineers, home studio enthusiasts, and producers who want hands-on control of their ‘in the box’ digital music production with a small footprint.

Weighing in at an easily transportable 1.3kg/2.8lb, the compact — 19.5 cm/7.8” (W) x 21.5 cm/8.5” (D) x 5.5 cm/2.1” (H) — Platform Nano neatly lives up to its name to bring tactile control to the most popular DAWs (Digital Audio Workstations) with a single, full-size, touch- sensitive motorised fader (with 10-bit resolution) alongside an accessible selection of hands-on controls logically laid out across a top panel that’s as easy on the eye as it is to use, including four rotary dual-function (rotate-and-enter) encoder knobs (generally used for controlling the track pan position, aux send levels, and EQ of the DAW being controlled), while an 11-segment LED (Light Emitting Diode) surrounds the main knob control to indicate its rotating position.

Testament to iCON Pro Audio’s acuity, Platform Nano does this as a durable desktop design delivering high-speed connectivity via a USB 3 Type B connector — which functions as a MIDI (Musical Instrument Digital Interface) port to the connected computer and compatible software, while also providing power to the Platform Nano itself — without compromising its inherently security-conscious, superior build quality, courtesy of a robust metal casing with inbuilt Kensington lock. 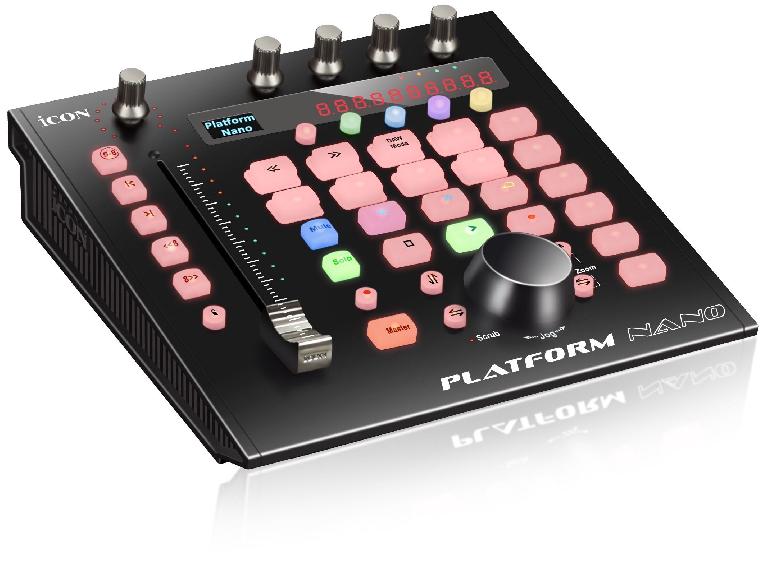 Remaining rearward, User A and User B 1/4-inch inputs allow for DAW function selection via connected foot switches, while it is recommended that Platform Nano is used with the (optional) Platform D2 modular display unit connected to the D/D2 port for optimal track and parameter monitoring via its large LCD.