IK Multimedia has announced the immediate availability of iRig Micro Amp, a battery-powered, ultra-compact combo amplifier with three on-board analogue channels plus a high-quality digital interface for direct connection to iPhone, iPad, Mac and PC. This allows users to expand their tone palette by unlocking a variety of amp and FX models in the included AmpliTube software/app bundle, as well as connecting to their favourite apps for learning, recording and playing. iRig Micro Amp also offers powerful sound that rivals larger amps, plus the ability to connect to external cabinets for even more volume.

Three analogue channels - clean, drive and lead - deliver a full palette of sounds with a distinctive character, created by the same tone gurus behind IK's award-winning AmpliTube software. On board are bass, mid, treble and gain controls to cover a wide range of tones. iRig Micro Amp offers 15W power (7.5W when running on batteries), and combined with its 4" custom-voiced speaker, pumps out surprising volume at half the size of similarly-powered amps. When additional volume or a bigger speaker is needed, iRig Micro Amp also offers a 4Ω cabinet output to keep up with a full drum kit for band practice. 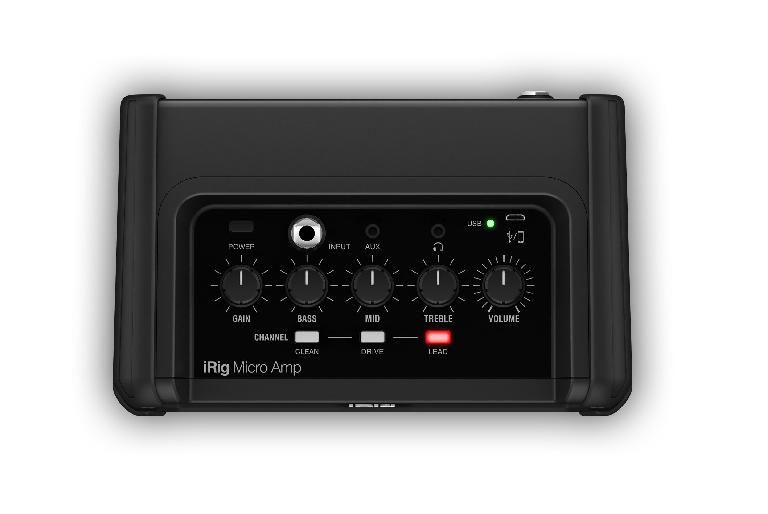 Weighing only 2.6 lbs. (1.2 kg), iRig Micro Amp is one of the most compact amps in its power range. With its compact size that fits in a backpack, and flexible options, iRig Micro Amp is an extremely portable and convenient option for everything from a bedroom or desktop, to jamming with friends or street busking anytime, anywhere.

iRig Micro Amp is powered by 6 x AA batteries or an optional 9V power supply. It includes an auxiliary input and headphones out for silent practice, as well as a cabinet output to power external speakers for band practice or smaller gigs.

Stay tuned to Ask.Audio for a review of iRig Micro Amp coming soon!