All Articles Synths & Sound Design
Modular Synthesis: Using Audio As CV & CV As Audio
Scott Riesterer on Sun, July 15th 1 comments
By mixing up connections that might not seem like they should work together, you can get some amazing results. That's the beauty of eurorack systems, as Scott Riesterer explains.

A big part of the beauty of eurorack is the open-ended nature of the patch points. Rather than having a preconfigured system, the user is required to make the connections necessary to create their patch. Of course, this opens up the possibility of making all kinds of “wrong” patches, but these can often lead to interesting results. So let’s take a look at some examples of how audio can be used as CV, as well as how CV can be used as audio.

This is more of a demonstration of a principal than an interesting technique of using CV as audio. Before we get started, I just wanted to illustrate that the signals passing through the jacks and patch cables in a modular system are simply fluctuating voltages, usually between positive five volts and negative five volts. If these fluctuations occur faster than twenty times per second, they become audible just like any other sound produced by a speaker.

I really like the LFOs on the MFB Kraftzwerg because they have such a wide range of rates, but also because they are normalled to modulate each other. This provides some easily achievable cross modulation for complex evolving results. In this short first demonstration I’m simply showing that if a low frequency oscillator (LFO) has a fast enough rate it will become audible. 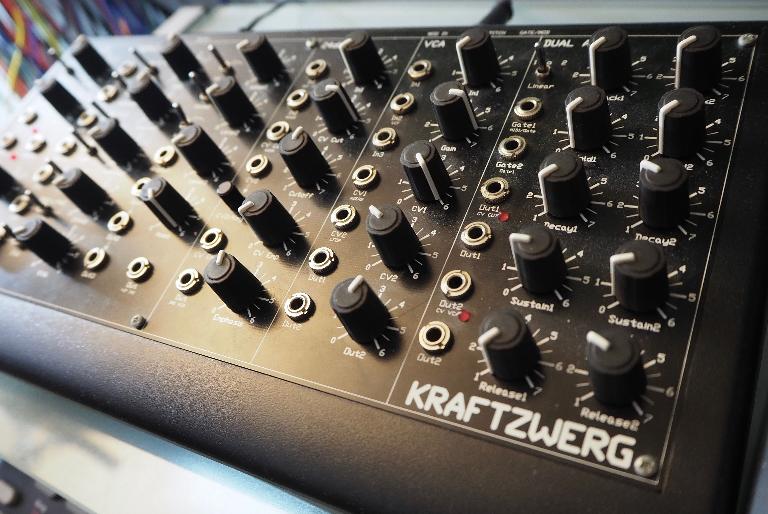 Using audio rate signals for frequency modulation can be a great way to get more wild and complex timbres. In fact, FM synthesis is based around using oscillators to modulate the frequency of other oscillators. Linear TZFM capable oscillators like Intellijel’s Rubicon 2 and Endorphin.es’ Furthrrrr Generator will be able to maintain stable pitch tracking while receiving this kind of modulation. Modulating an oscillator’s frequency at audio rate produces new harmonics called sidebands. The ratio, or difference in frequency between the oscillators will determine what kind of sidebands and results are produced. Whole number ratios tend to be more consonant and pleasant, while other ratios will be more dissonant and harsh.

In the first example I’m using the Morgasmatron filter A with full Q or resonance to produce a sine wave at the output. I’m then applying frequency modulation from the Kraftzwerg LFO so you can hear the transition from slow modulation up into audio rates.

Next, I have Marbles sending a randomly generated melody to Morgasmatron. Filter B is also set with full Q to output a sine wave, but its output is being sent to filter A’s FM input. I use the Morgasmatron mix output to blend from filter A to B so you can hear that they are both playing the same melody with an offset tuning. Then once I turn up FM1 on filter A you can hear the tone become more complex.

Finally, adding a VCA between the modulator and the FM input allows you to use an envelope to control the timing and amount of frequency modulation. This is useful for creating bell-like tones, because you can have the frequency modulation “strike” and then fade out while the note stabilizes. This technique is called FM Indexing. 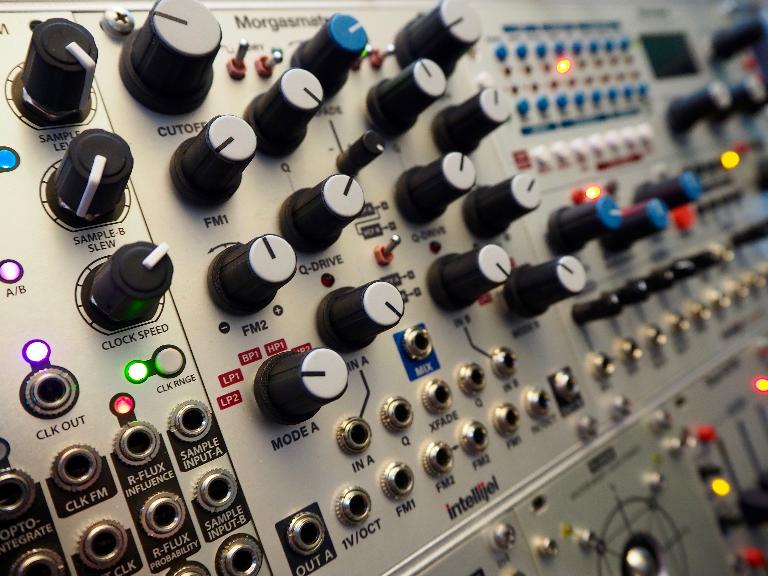 Using an LFO to control the volume of your oscillator through a VCA will create a tremolo effect where the volume fades in and out. If you increase the LFO rate into audio ranges, the oscillator dips in volume before it can complete a cycle and this changes its waveshape. This technique can be used to create clangy ring mod type sounds.

First, similar to the previous frequency modulation demonstration, I use the Krafzwerg LFO to modulate the amplitude of a Morgasmatron sine wave through a Quad VCA. Again I start slow, and then bring it up into audio range.

Next I use two Morgasmatron sine waves again, only this time I use B to control the amplitude of A. When I sweep the cutoff frequency of B you can hear the timbre of A change dramatically.

Sample and Hold modules perform the same basic function as the analog to digital converters in your recording interface. The amplitude of incoming audio is sampled and stored at a certain rate, usually either 44,100 or 48,000 times per second, but higher sampling rates are now also more commonly used. Instead of writing these stored amplitude values to a hard drive, a sample and hold module will output them as CV. The speed that a sample and hold module takes these readings is called the clock.

In this case I’m using the SSF Ultra Random Analog, which has a very wide clock range extending up to 23kHz. By running a drum groove through the sample input and lowering the clock speed, I am effectively lowering the sample rate. This is great for creating the chiptune sound reminiscent of old video game systems and samplers. If your sample and hold module doesn’t have such a high range available but has an external clock input, using a square wave oscillator can be quite effective.

Because the Ultra Random Analog’s clock rate goes so high, it can be used as a square wave oscillator. You can hear me bring it in alongside the drums in example 4b. It’s worth pointing out that gates clocks and triggers are the same as pulse waves if they repeat fast enough. This also means that you can use clock dividers to produce sub harmonics from square waves.

Using audio signals can sometimes produce interesting frequency modulation, such as in 4c when I apply the drum groove to Morgasmatron’s FM1. Layering the two created a satisfying bouncy burble. By passing the drums through the Ultra Random Analog first, I can use the Slew rate to smooth the CV output.

The last example in this section demonstrates sample rate reduction applied to a saw wave melody. 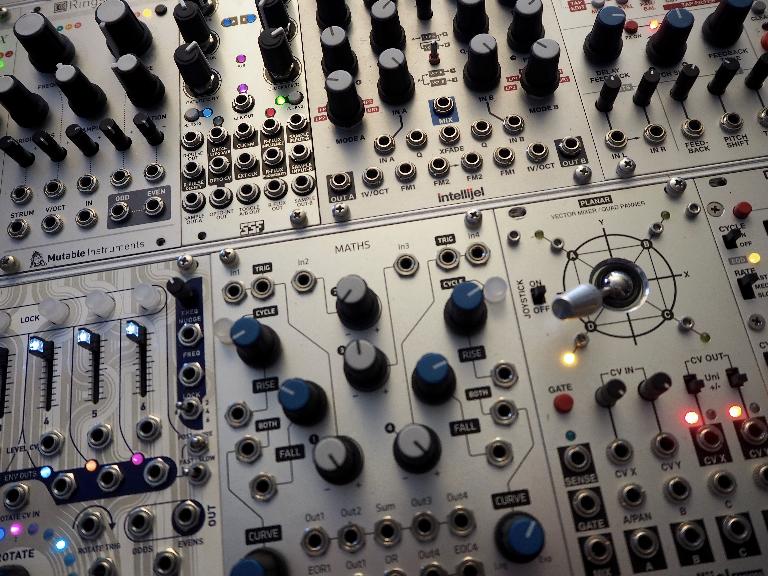 By using an audio rate square wave to trigger an envelope, the function will cycle fast enough for it to be heard. Because it is firing in time with the oscillator, it will even track the same pitch, meaning it can be sequenced. With function generators that don’t retrigger during their attack phase, increasing the attack will cause an octave dip. I found it fun to layer the envelope together with the triggering oscillator as you can hear in the examples using both Maths and Dual ADSR.

In this case, I’m using a Kraftzwerg square wave to trigger Maths. Most envelopes and function generators are unipolar, so if you use them as an oscillator you may want to offset them to create a bipolar signal like regular oscillators. In the case of Maths, you can use a second channel as an offset and then use the Sum output to get a bipolar signal.

Complex rhythms can be developed by running gates through a delay before using them to trigger sounds in your system. In this example I have a simple regular gate passing through Rainmaker then triggering Rings. This means that you can use the wet/dry mix to transition from a simple rhythm to something far more complex.

Much more complex modulation can be created by running an LFO through a wavefolder. In this case I’m sending Maths through the µFold, then modulating the frequency of Morgasmatron’s sine wave. 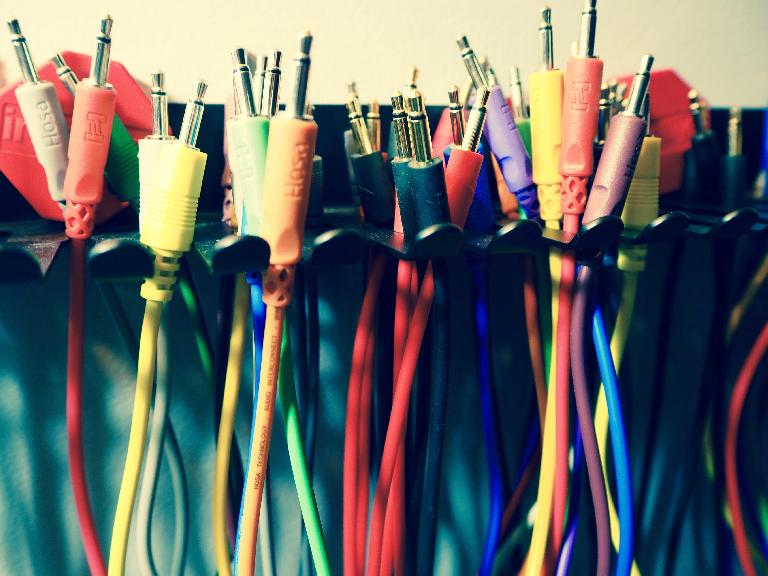 These are just some of the ways you can use audio and CV interchangeably in a modular system. Hopefully these give you some new ideas and inspiration to try out on your own. Of course, I’m bound to have missed a bunch of cool techniques so I’d love to hear about your favourite ways to mix and mangle various sources in your systems.

Learn all about Control Voltage in this online synthesis course by Marc Doty: https://ask.audio/academy?nleloc=course/1338/control-voltage
Related

Scott Riesterer
Scott is a Sound Designer from Vancouver, Canada who has contributed his post production audio skills to dramatic and documentary films, animations, video games, and oddly enough, the Chevrolet Volt. His music makes heavy use of field recordings gathered from a variety of sources and locations. In 2013 he released Sonidos De Cuba, an ambitious album built upon field recordings from a trip to Cuba and it was nominated for Best Electronic Album in the Western Canadian Music Awards. He is currently working on music featuring recordings from Belize, Japan and Thailand between his dialog editing projects.
Related Videos
Comments (1)