All Articles News
New Submarine Pickup Makes One Guitar Sound Like Two
Rounik Sethi on Wed, June 24th 3 comments
Language
Critically acclaimed singer-songwriter, Pete Roe, announces worldwide release of new guitar pickup, The Submarine. Now you can add a bass to your electric with one guitar and one pickup.

'Apply effects to just two strings of your guitar. Add bass to your electric, or a screaming lead solo to your acoustic fingerpicking'

The Submarine, a new guitar pickup, was conceived, designed and developed by Pete Roe, critically acclaimed singer-songwriter and former stalwart of Laura Marling's band. He has toured with Mumford and Sons, Ben Howard, Lucy Rose, and Willy Mason, to name but a few.

Pete chose the life of a professional musician when he walked out of his Mechanical Engineering degree final exam, so he wouldn't miss an important rehearsal. But his love of engineering remained, and proved invaluable ten years down the road.

In fact, the road is where The Submarine was born. During a long tour with a band that had only one space on board for Roe on their bus, he could not bring along his bassist. Being stuck without the sound to convey his songs the way they were intended, Roe experimented with various effects pedals and finally made his own one string pickups in dingy dressing rooms and budget hotels. Used with an octave pedal, Pete found his homemade pickup could give the effect of a bass guitar accompaniment. The first prototypes paved the way for further development and, two years of hard work later, this first concept resulted in The Submarine.

The Submarine fits most acoustic and electric guitars and is held in place by a new nano-material suction pad similar to gecko's feet. It requires no alteration and causes no damage to the guitar. The signal it picks up from two strings gives a second output to the guitar, to which various effects can then be applied.

This opens up an exciting new set of previously impossible guitar sounds and techniques. Alongside adding octave bass to the low strings, it is now possible to add overdrive, delay or atmospheric effects to the two high strings. 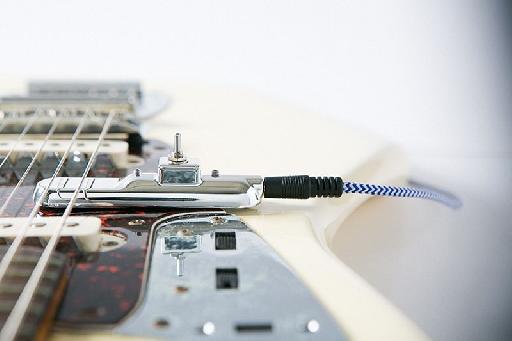 The Submarine guitar pickup on a Fender Jazzmaster.

A number of production prototypes were made in order to refine the assembly process earlier in the year, and these were quickly snapped up by artists such as Bon Iver, Royal Blood and, of course, Laura Marling. 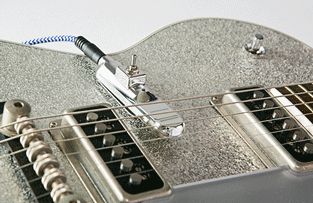 On Wednesday 24 June 2015 The Submarine is due to be launched on European crowdfunding platform Ulule. The first 25 Submarines are up for grabs with a whopping 40% discount. An incredible offer for musicians looking to grab new gear at a bargain price, and support a '˜one man band' entrepreneur who has created a pickup that allows you to be a one man band on the road.

This link to the Ulule campaign is here: www.submarinepickup.com/crowdfunding

Further information and demo videos can be found at www.submarinepickup.com

Rounik Sethi
Rounik is the Executive Editor for Ask.Audio & macProVideo. He's built a crack team of professional musicians and writers to create one of the most visited online resources for news, review, tutorials and interviews for modern musician and producer. As an Apple Certified Trainer for Logic Pro Rounik has taught teachers, professional musicians and hobbyists how to get the best out of Apple's creative software. He has been a visiting lecturer at Bath Spa University's Teacher training program, facilitating workshops on using music and digital media tools in the classroom. If you're looking for Rounik, you'll most likely find him (and his articles) on Ask.Audio & macProVideo.com.
Related Videos
Comments (3)

Dream It. Do It.
Do you want to learn Electric Guitar Production?
Yes, I want to learn!
No Thanks, I just want to read the article.
Feedback
How are we doing?
We'd love your thoughts, feedback and questions regarding our new site. All feedback is appreciated!
We do not respond to this form! If you need support, please visit our support page.
Thank you for your input!
Your message has been successfully sent
Course Advisor
Don't Know Where To Start?
Ask A Course Advisor