There’s a wide choice on offer for anyone wanting a dedicated MIDI controller device these days, but Arturia has developed its line of keyboard controllers to work specifically with its own virtual instruments, as well as being usable as general purpose MIDI devices of course. Keylab Essential comes in 49 and 61-key versions and provides a great set of controls for whatever you’re trying to achieve with your setup. Let’s look at the specs.

First up, build quality is lightweight but solid and the white finish is a nice change from the standard black. Around the back is USB for power and MIDI, and you can add an optional PSU for powering without the need for a computer. A sustain pedal input helps with more expressive keyboard playing, and there’s a MIDI out port for connecting to external gear either for pass-through control from the computer or directly from the keyboard.

Moving to the front you’ll find the requisite controls: pitch bend and mod wheel, transpose, MIDI channel and the like. More interesting is an intelligent chord function for easy playing of complex chords, and eight performance pads with assignable functions. A DAW control section provides transport controls using the MCU / HUI protocols which are available in most DAWs, even if they’re not quite as elegant as bespoke mapping setups.

Back To The Lab

In the centre is a two-line LCD screen that provides visual feedback and is specifically geared to showing preset names in Analog Lab, a full version of which comes bundled with the controller. This is Arturia’s virtual synth that collects together some of the best sounds from across its wide range of other synths and presents them with a friendly interface. As you might expect, developing both the software and hardware means it’s easy for Arturia to integrate the two. It does this also with the 9 knobs and faders to the right, which are pre-mapped to control whichever of Arturia’s instruments is active, or the faders and pan in your DAW. The large dial in the centre works as a preset navigator for all of Arturia’s recent compatible instruments. 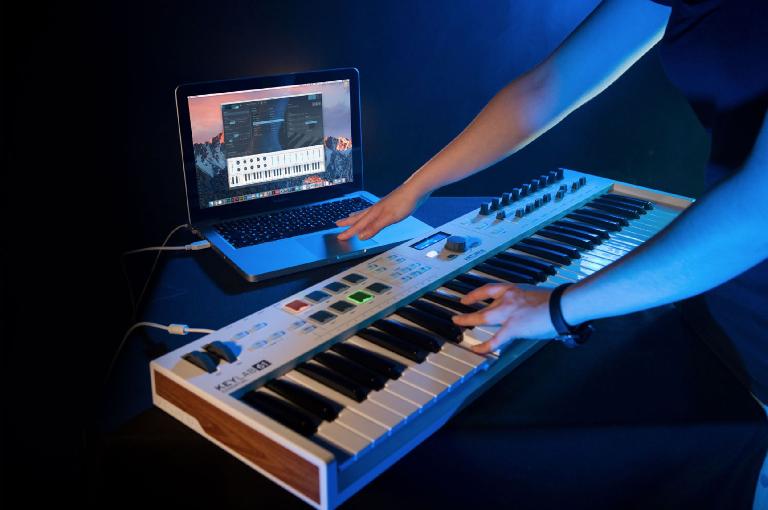 Analog Lab is 89 Euro by itself, so it’s a great addition and nicely complements the controller, especially given the integration work that’s been done. You also get Live Lite by way of a DAW and the UVI Grand Piano Model D instrument, likely much classier than whatever comes as standard with your regular recording software. Ideally you’d want to play acoustic pianos with weighted keys, but that’s not what KeyLab Essential is really designed for - it’s more of an all-purpose control device.

KeyLab Essential is a great general purpose MIDI controller with a good look, solid build and enough hands-on controllers to keep almost any user happy. Between the nicely playable keybed, pads, knobs and sliders not to mention the DAW control and chord mode there’s plenty to like. Bundling Analog Lab is a nice touch too and the integration with that and Arturia’s other recent instruments means it’s an even better deal if you happen to be already invested in the company’s ecosystem. Either way, a solid and dependable workhorse MIDI controller.

Cons: Perhaps inevitably, best integrated with Arturia’s own software. Plenty of competition in this field (though not with Arturia-specific integration).

Learn more about Arturia software and hardware in the AskAudio Academy here.
Related