All Articles Review
Review: Arturia MiniLab MK2
Matt Vanacoro on Tue, January 3rd 3 comments
Language
The new Arturia MiniLab MKII has an attractive sub $100 price point. But does this uber-portable and ultra small music controller perform as classily as it looks? We find out in the video review.

One thing we just can’t get enough of around here at AskAudio HQ is controllers. Thankfully, the manufacturers of the music world seem to love sending them to us at a fairly constant rate. After being really impressed by its 88-key ‘big brother’, I was very excited to get my hands on the Arturia MiniLab MkII and see how much ‘controller DNA’ would be shared between the two.

Watch the video review of the MiniLab MKII here:

Let’s get this right out there, this thing is built like an absolute tank. Having this portable little feat of engineering in your hands makes you wish that all MIDI controllers were built this sturdy. The MiniLab MkII is absolutely made to withstand the rigors of tossing it into your backpack, and hitting the road without thinking twice. There are no protruding wheels, and the controller’s knobs that do protrude feel unyieldingly solid. You can have no qualms about taking this little guy to the most extreme music production circumstances. 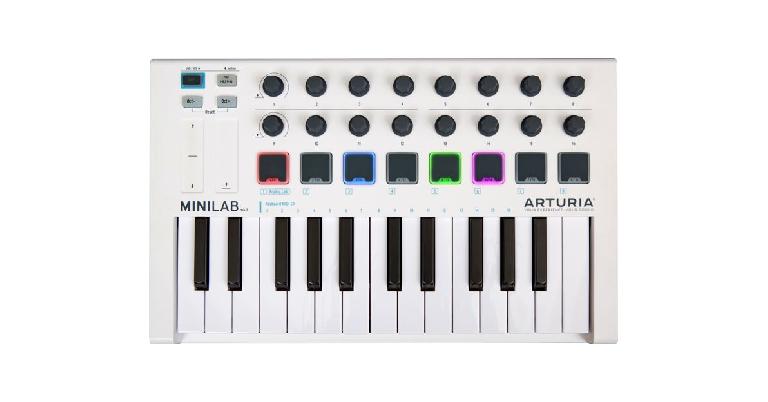 I had to double-check it against a few other portable controllers I had around the house, but it’s confirmed. The keys on the MiniLab are *ever so slightly* larger than many typical portable controllers. As a card carrying member of the ‘fat finger club’, this thrilled me. Your accuracy will be noticeably better with this keyboard.

The key response is on par with the build of the entire keyboard, which is to say, fantastic. The keys feel strong and sturdy, and yet bounce back with a very satisfying feel. Dare I say, this is a mini controller that is actually fun to play. 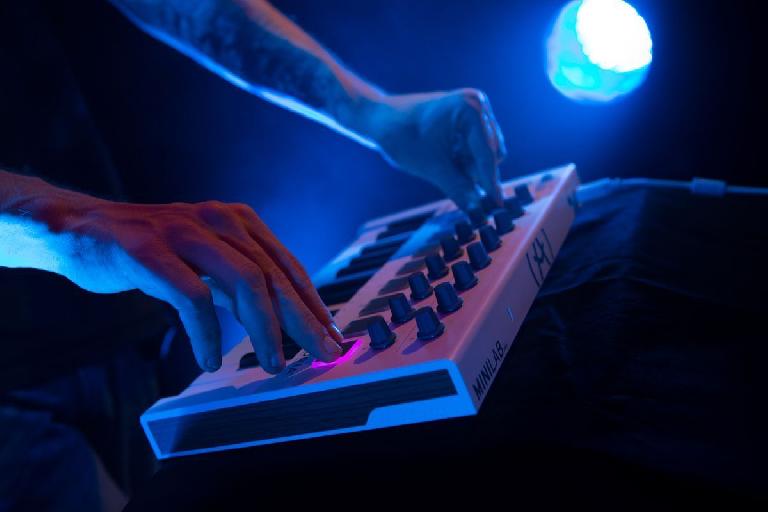 The MiniLab MKII is a mini controller that is actually fun to play.

The MiniLab MkII is, of course, platform agnostic. I brought it to my kid’s swimming class, hooked it into my iPad, and knocked out some click tracks in GarageBand. As soon as I got home, I switched it over to my laptop, without drivers, and toyed around with the included Analog Lab Lite software. I was a big fan of the full version included with the 88 key controller, and at the price point Arturia is selling this keyboard at I was happy to see that they included quite a few sounds from Analog Lab in the lite version. The UVI grand included is a nice touch as well.

Just to push the ‘compatibility’ category to the limit I tried a few ‘off the wall’ things. The MiniLab MkII worked just fine as a second keyboard hooked up to my Korg Kronos. I also paired the MiniLab up with a wireless Bluetooth MIDI dongle and controlled the sounds out of my iPhone wirelessly. The MiniLab worked with any device I tried it with without a hitch.

The MIDI Control Center software is quick, responsive, and easy to figure out.
[ad_unit]

The Arturia MIDI control center software is second to none. I knew this from the KeyLab 88, and it’s no different here. MCC is a pleasure to use, quick, responsive, and easy to figure out. Truthfully, you don’t need it much here. The MiniLab’s functions are all easily accessible from the front panel, and everything is clearly marked.

The MiniLab MkII is a no brainer for anyone looking for a portable controller. One you try it, just about anything else in the price/build class feels like a toy. Buy one, toss it in your backpack/laptop case/back seat and be ready to make music anywhere, at any time.

Cons: None whatsoever. If you need a portable MIDI controller, you won’t likely find a better one. Fingers crossed for a Bluetooth-enabled model down the road!