This was my first experience using a Blackstar amp. After a chance encounter with the company earlier at NAMM this year, I was curious to try out their products and see what they had to offer. BlackStar's amps are designed and engineered by BlackStar amplification in the UK. The ID:Core BEAM amplifier is a 20 watt stereo guitar amp with Bluetooth functionality and channels for both electric and bass guitar. It was hard to believe that an amp this small could offer all these features and look good to boot! I decided to crank up the volume and put it to the test in an afternoon jam session. 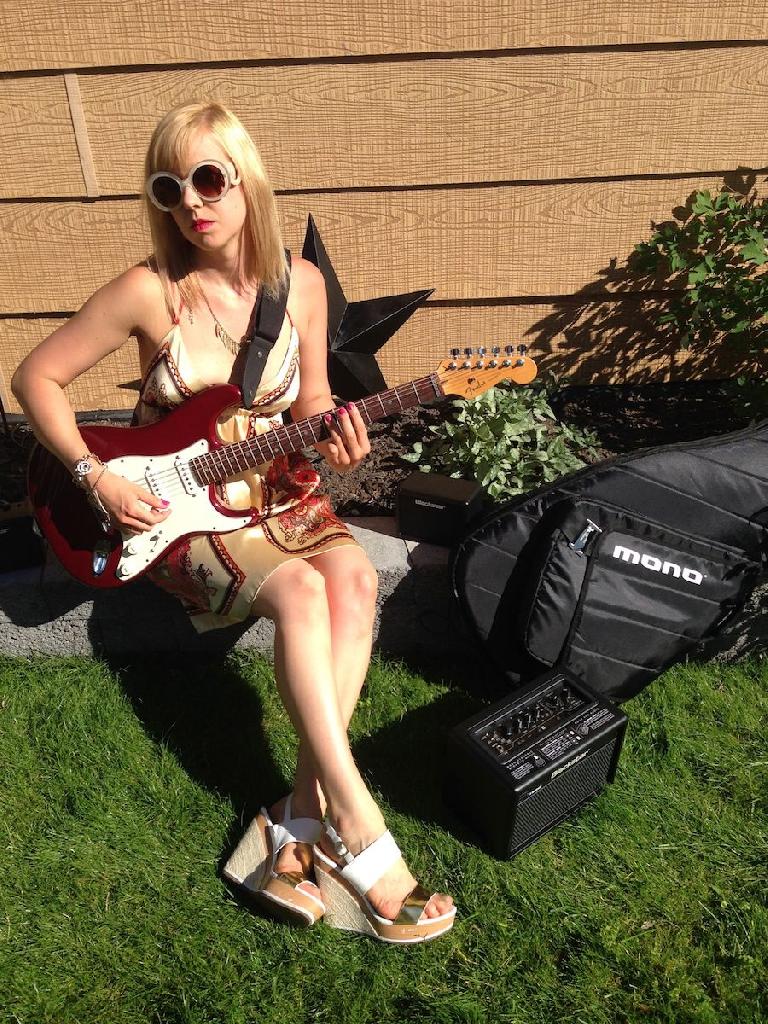 The ID:Core BEAM amplifier is small, cute and has a sort of retro type look to it. I instantly liked the amp's appearance, which is a good starting point. With a size of 291 mm x 202mm x 166mm, it's an appropriate size for a practise amp and will fit into smaller jam spaces. It has a weight of only 3.9 Kg, which means its quite portable and can easily be taken anywhere. 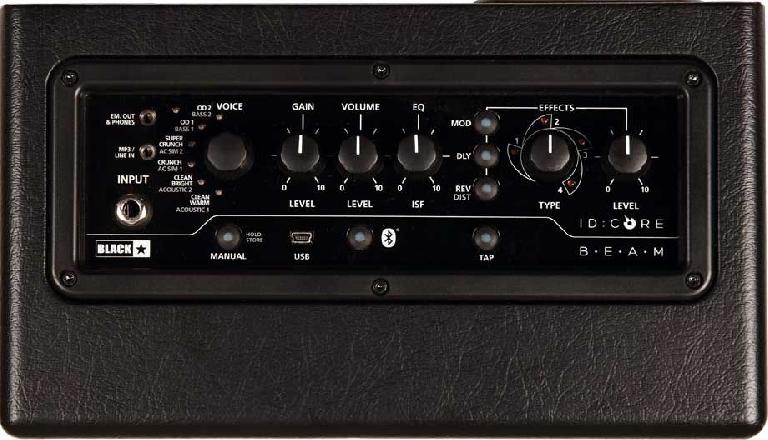 The amp has two main modes; manual and patch. When the manual button is unlit, patch mode is engaged and the sound you hear is the sound of the programmed patch. When the manual button is lit, the sound of the amp refers to the position that all of the knobs on the amp are in. I thought this was a pretty cool feature and the first time I'd personally seen something like this on a guitar amp before.

There's a toggle knob on the amplifier that allows users to switch between electric guitar, bass and acoustic, and acoustic simulator voices. I was impressed with the quality of the pre-amp voices; all of the patches sounded quite good. My personal fav was the clean warm tone (with the chorus effect on top). Good job on the patch programming BlackStar! This is amp capable of cranking out a notable amount of sound for such a small amp, making it ideal for musicians who are rehearsing on their own or with a buddy or two.

Each of the sounds can be customized by setting gain and EQ. BlackStar has a feature on their amps called ISF control which moves the bass, middle and treble EQs together as a whole tone stack response. If you move the EQ knob counter-clockwise all the way, you'll hear the 'US' sound, and if the EQ knob is turned all the way in the opposite direction you can hear their 'UK' sound. This is certainly a effective way to quickly EQ your guitar tone, and as Blackstar would say dial in 'the sound in your head'.

The ID:Core BEAM amplifier has an effects section that features three types of effects; modulation, delay and reverb. Each of the types of effects has a choice between four different flavours of the effect, giving guitarists twelve different effects and a level control. The effects sounded pretty decent and are certainly a welcome feature on an amp as compact as the ID:Core BEAM. Although it's not quite the same as having effects on a pedal board, these effects are great for practising and musicians will be able to easily dial in tones for songs. 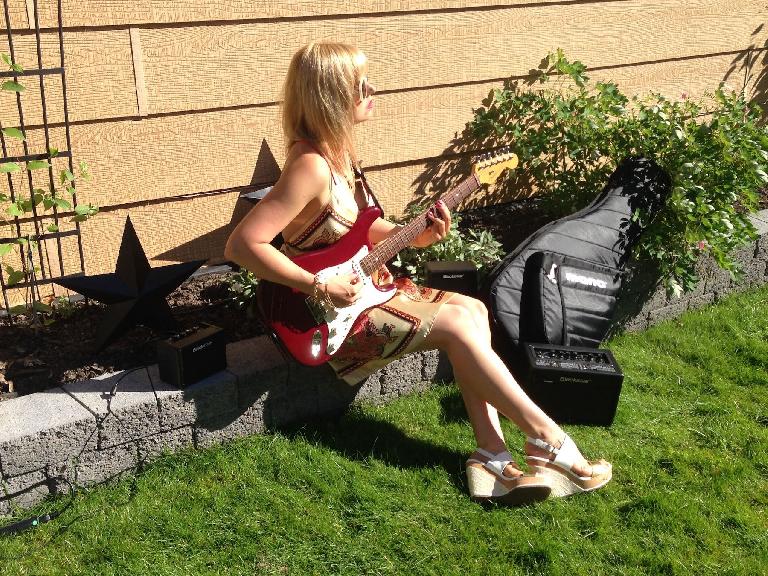 One of the coolest features of this amp is the fact that it's Bluetooth enabled and can be paired with your Bluetooth device. While I was a little skeptical about this, once I paired my iPhone with the amp I appreciated this forward-thinking innovation. The ability to play back audio via Bluetooth makes the Id:Core BEAM amp an valuable practise tool; you can rehearse to backing tracks or bed tracks you've created. When the amp is not being used for guitar practise, you can play songs from your phone or Bluetooth device and use the amp as a speaker. Just one more reason to try out this amp for yourself! 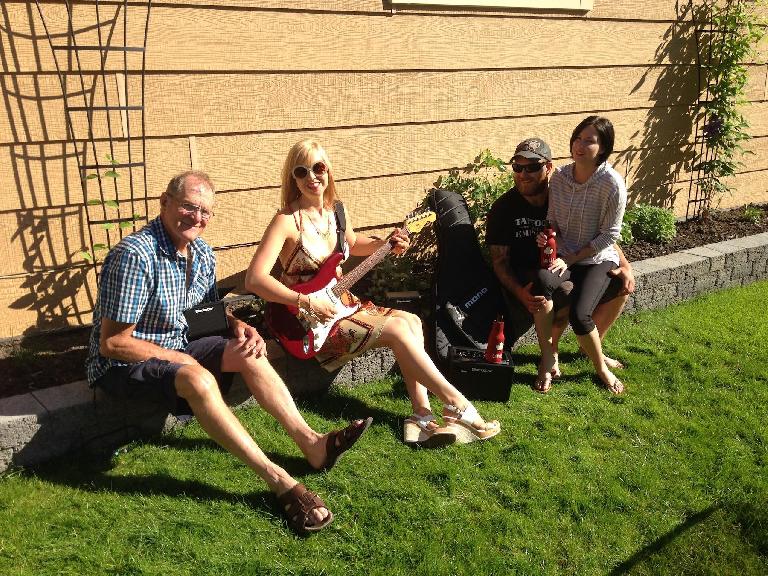 The ID:Core BEAM amplifier sounds great and combines cool retro styling with futuristic features. Its a winning combination and would make a great addition to any guitarists collection of amps.

Cons: I would still prefer a traditional three band EQ. Although the one-dial knob concept is interesting, I think you can achieve greater sound control by adjusting the lows, mids and highs individually.

Sara Simms
Sara Simms captivates the world as an innovative musician, DJ, turntablist and electronic music producer. She's a multi-instrumentalist who's known for her love of music technology. Sara makes her mark in the music community by crafting diverse sets with styles ranging from pulsating techno to house. She balances technical skills with a refined musical sensibility and her approach to DJing focuses on improvisation through multi-deck mixing. Her passion for music has led her to tour through North America, Japan and Europe. Recently, she's played sets for Allen and Heath's live broadcast at the Amsterdam Dance Event, on Detroit's 313.FM and on Toronto's CTRL Room. Sara has an intriguing background as a jazz guitarist turned turntablist. She's competed in DJ battles in both Canada and the US, and was a runner in up the 'Scratch' â€“ The Ultimate DJ Contest. Sara's DJ career began in Toronto with residencies at venues like This Is London, The Courthouse and The Ritz-Carlton. She's now focused on studio work and has founded her own label, Simmetry Sounds to release productions and collaborations. As an artist who stays on the cutting edge of new technologies, Sara has worked together with brands like Arturia, Casio, Fender, Genelec, Pioneer DJ, Mixed in Key, Moog Music Inc, Native Instruments and Roland. As a DJ, Sara has played events for legendary brands like Dior, Guess, M.A.C. Cosmetics, Victoria's Secret and Volvo. Sara's career highlights include: playing at Ultra Music Festival in Miami, opening for the Friendly Fires in Cannes, France, appearing on DJ QBert's 'Skratch University', a US tour with Melleefresh (Play Records), judging the Canadian DMC Championships, playing at AIR (Tokyo), W Hotel (Miami and Seattle) and performing at Pride Toronto.
Related Videos
Comments (3)