Since the demise of FireWire, many pro audio interfaces have been adopting Thunderbolt as their protocol of choice for communicating with computers. And as good as it is, Thunderbolt does tend to be found only on higher end machines. Many computers are still reliant on USB and in the case of newer models, the very much higher-capacity USB-C format. Indeed, many of Apple’s laptops only have USB-C now.

So it is that Focusrite, that well-regarded developer of high end studio hardware, has brought its Clarett marque to the masses with the Clarett USB range. The name carries weight - until now, it had been restricted to the costlier Thunderbolt-equipped models only. The Clarett USB interfaces come in thee models - 2, 4 and 8, representing the number of individual physical inputs they have, although each model actually has rather more thanks to the availability of ADAT optical in.

My review model was the Clarett 2Pre USB, a compact and portable model aimed at singer songwriters, laptop producers or those working in smaller spaces, due to its small footprint and light weight. It’s very solidly built of course and comes with a power supply although computers with a 15W USB-C port will be able to bus power the interface where available. If extreme portability (possibly at the cost of some fidelity) is a real issue for you, there are many other models out there that will do it, including some from Focusrite.

Externally, the 2Pre USB is really easy to understand, even for novices. On the front panel you will find two combo jacks for connecting XLR or jack plugs, a level control for each channel with Halo light readout to monitor levels, instrument / Air light and a Phantom Power on/off switch. A large monitor dial lets you set monitor level and theres a high powered headphone output with its own gain control.

On the rear panel is power and a lock port, as well as four individual line outputs and a USB port. Two USB cables are provided to cater for either conventional USB-A or the newer USB-C protocols. You also get MIDI in and out DIN plugs, which is a nice touch since smaller audio interfaces sometimes omit these. An optical input port allows you to expand the inputs with up to 8 more for a total of ten. All in all it’s pretty hard to go wrong with the way the unit is laid out. Everything is clear and straightforward and won’t confuse even a novice user.

Something In The Air

Internally is where the Clarett shows its pedigree however, with specs that go beyond what you might expect from a compact USB interface. The well-regarded Clarett mic preamps are capable of delivering plenty of gain without introducing any noticeable noise or distortion. They also include Focusrite’s “Air” circuit that “engages an analog model of the company’s classic transformer-based ISA mic pre” to give a boost to high frequencies, especially for vocals and acoustic instruments.

It’s capable of 192kHz/24-bit digital conversion and ultra-low round-trip latency, so you can use your DAW plug-ins for monitoring without having to risk pops and clicks from constantly fiddling with buffer settings. Routing and monitor mixing can be controlled using the Focusrite Control app that runs on your Mac, PC, iPad or iPhone and gives you easy access to internal hardware parameters on the unit. Although software control panels for interfaces aren’t new, this one is especially user friendly and the fact it can run on an iOS device as well means no more going back to the computer to change settings - perfect for anyone recording themselves performing.

Setup and operation of the Clarett 2Pre USB were very straightforward, and the results excellent. The low roundtrip latency meant I could use decent quality reverbs on my vocal while recording without experiencing latency. Direct monitoring is possible using the Control app to set up a specific routing, and  latency was very low with regular recording tasks. The clarity of the recordings was superb as well, especially with the Air feature engaged and adding sparkle to the top end of acoustic guitar and vocal takes. The mic pres have a dynamic range of 118dB which is impressive. The Focusrite Control software is also something of a breath of fresh air in a world where these apps can sometimes be a little opaque. 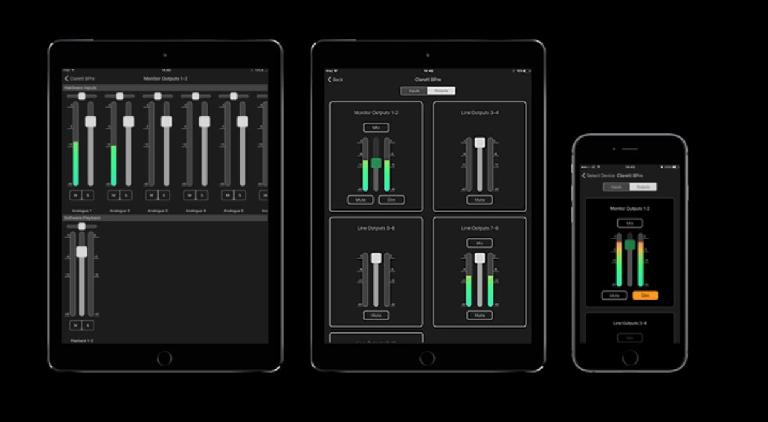 But wait! Your purchase also gets you a bundle of other goodies as well. Everything you need, in fact, to get up and running recording and producing music. There’s Ableton Live Lite, 2GB of Loopmasters samples, XLN Audio’s Addictive Keys, Focusrite’s Red plugin suite and Softube’s Time and Tone bundle.

The high quality of the design and great results from the Clarett USB make it an excellent choice for anyone needing just a couple of inputs at a time - or who occasionally needs to add more via the ADAT input. The larger models sell for $600 (4Pre USB) and $800 (8Pre USB) respectively, if you need more physical inputs to be used at the same time. In a marketplace that’s crowded with small format USB audio interfaces, this one stands out in a couple of ways. The electronics are first class, it’s easy to use and the results are excellent. The addition of MIDI ports is nice too, meaning there’s no need to add a second interface to bring MIDI hardware into your recording setup. For many users then, this is a great choice for high quality recording with a small footprint.

Cons: No USB power over USB-A. Should work with iOS thanks to class compliance, but not officially supported.