All Articles Review
Review: GMSN (Glasgow Make Some Noise) Pure Modular Synth
Scott Riesterer on Thu, July 27th 0 comments
A pre-built modular synth system can be a great way to get all the flexibility and power but without the hassle of building it for yourself. So how did Scott Riesterer get on with Pure Modular?

This month I had a special treat. Instead of being sent a module to review, I was sent an entire system! Glasgow Make Some Noise was kind enough to loan me one of their Pure Modular synths to check out. The Pure Modular is an 84 HP Eurorack synthesizer in a rugged, wooden, lidded case. From left to right, it’s made up of an LFO, Noise Generator, Sequencer, Quantiser, two Oscillators, a Low Pass Filter, Envelope Generator, and VCA. This provides everything you need to get started putting together a wide range of sounds, but it also plays nicely with any other modular gear that you might have.

The Pure Modular really delivers where it counts, as the two oscillators and filter sound great. Each oscillator has saw, triangle, and square with clean and accurate waveforms. A knob lets you sweep the pulse width, and there’s also a CV input with an attenuator for PWM. The Linear CV Input provides Frequency Modulation via the FM knob, and there is a Sync input to reset the start of the oscillator’s cycle. Coarse and Fine tuning knobs are also present, making it easy to tune your oscillators. 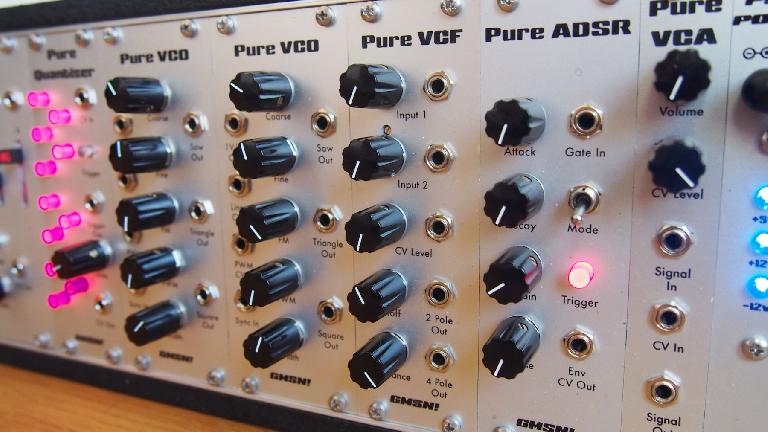 A melody with some subtle frequency modulation shifting between octaves.

The low pass filter has two inputs and outputs for both two-pole and four-pole variations. This opens up the fun possibility of running the output of one filter back into an input. The effect is similar to the Brute Factor control on Arturia’s analog synths with squealy and squelchy responses. Both filter modes self resonate with a nice round sine wave and will track pitch with one volt per octave. All of the input controls (including the Pure VCA) can clip the signal if you turn them up all the way. This can provide some nice distortion and sever a sine into a square. The filter has a warm and full Moog-like quality that lends itself well to a wide range of timbres, whether you’re going for something aggressive, or smoother, rounder tones. 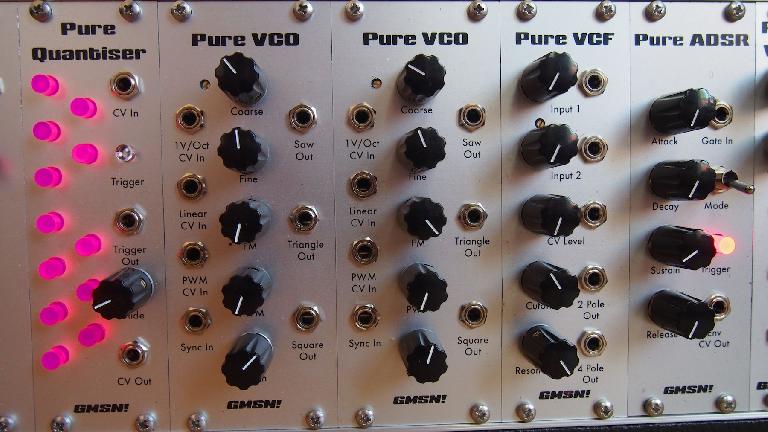 Using the self resonating filter as an oscillator, you can overdrive the input to push the sine tone into a square.

Running the filter back into itself and modulating the cutoff with an oscillator can produce some pretty wild results.

The Sequencer and Quantiser are a really fun pair, as both provide simple, immediate, hands on control. The Sequencer uses eight sliders to set the voltage values with a three position switch to determine their range. These values are outputted through the CV out, which has a Glide control to add portamento. Each step is also able to output a gate signal.  It has a clock input and output with a knob to control the speed of the internal clock. The switch on the left determines the playback order of the sequence between forward, random and ping-pong. Personally, I would have preferred one master output for the gates with the ability to activate or deactivate particular steps instead of per step gate outputs. Of course, having both would have been even better. 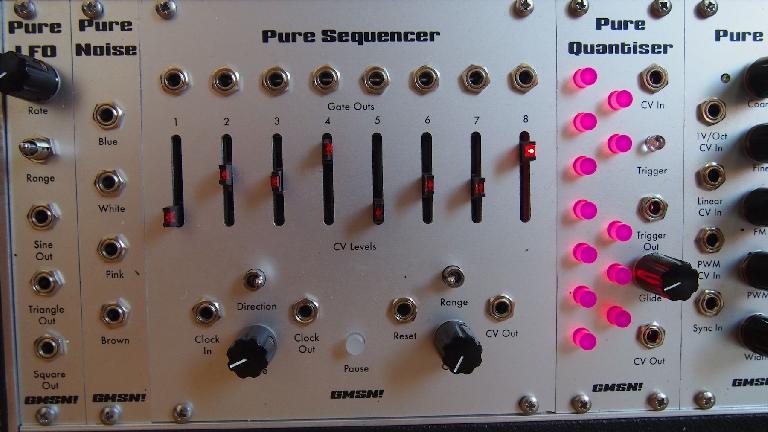 The Quantiser has a button for each note of the scale that can be activated or deactivated to filter the incoming notes. While receiving these notes, it will intelligently interpret them in order to output triggers to launch envelopes. This allows you to send both pitch CV and gate signals from the Quantiser using a single CV input. The Quantiser also features a Glide control for portamento.

A basic subtractive patch run by the sequencer. First using the 4-Pole filter, then the 2-Pole.

Here I’m using the LFO to reset the sequencer and adjusting the rate of the LFO.

By sending an LFO into the Quantiser it can create arpeggios.

The sequencer’s random mode is great for making evolving melodies.

The LFO is also quite simple, featuring sine, triangle, and square outputs, a high and low range switch, and a knob to control the rate. An LED to indicate the rate of the LFO would have been helpful, and an input to control the rate would also have been a nice addition, but these would may have required an increase in the size of the unit. Also, the ADSR can function as a more flexible LFO with an LED to indicate its timing if the switch is set to the bottom setting. This is referred to as Trap mode, and no, it has nothing to do with the genre. Trap is referring to the Trapezoidal shape of the resulting LFO. In this mode the functions of the knobs are slightly adjusted as Sustain becomes a decay control, and Decay and Release determine how long the LFO remains in fully on and off states respectively. Because this mode loops, the gate input becomes a reset control allowing the LFO to be synchronized. The top setting is a standard ADSR and the middle is a more percussive AR envelope. 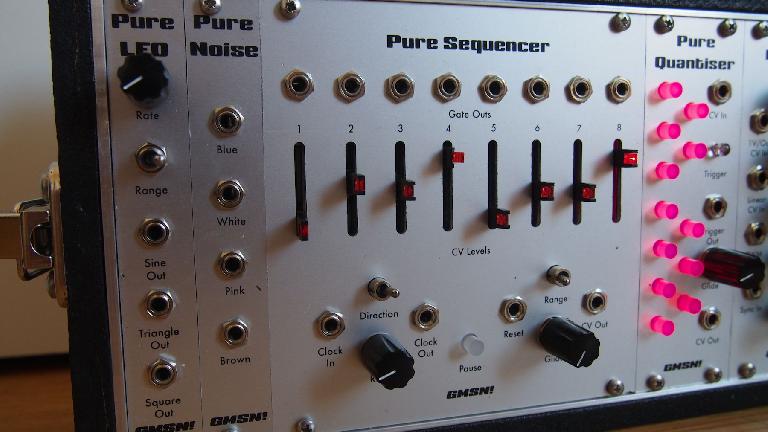 The LFO is triggering the gate, while the sequencer runs without synchronization.

Getting a bit more wild and west coast using oscillators to modulate each other.

The Pure Noise module features not just the standard white and pink noise, but blue and brown noise as well. Blue noise increases in volume as frequency increases, so it has a brighter tone with little low frequency content. Brown is the opposite, decreasing in volume as frequency increases and therefore has a darker bassier tone. The VCA is again quite simple, but useful and has everything you would expect. Signal input and output, CV input with an attenuator, and a master volume control. Lastly, the Pure Power module outputs a hefty 1.7A on all three rails and offers protection features to avoid damaging your system. GMSN! also offers a Four HP Sample & Hold module, which definitely would have been fun to use with the Pure Noise and Quantiser. 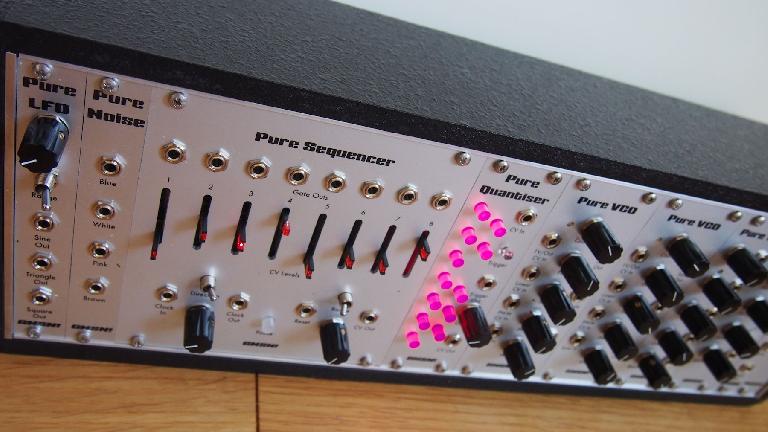 Glasgow Make Some Noise has adopted an interesting open source business model with their products. All of the designs for their products are available to download through their website with building instructions. There are even detailed tutorials on programming using Arduino which provides the control for many of their modules. They ask that donations be given to support the research and development that went into making these units possible. It’s a very unique and inspiring approach and I wish them the best of luck!

Naturally an 84HP footprint is going to create some limitations, and while GMSN! has done a good job of maximizing the available space, there are some inevitable compromises. Some panels could possibly have been rearranged to optimize the space a little and squeeze a few more features in, but all of the important stuff is there. Because there are no multipliers or mixers in the system (other than the two inputs in the VCF), I was glad I had a few Intellijel Hubs and Tip-Top Stackables in order to distribute signals to more than one destination. For the size, this system offers great sound quality and enough flexibility to provide plenty of future sonic exploration. Also, the individual modules are elegantly simple, and definitely deliver. 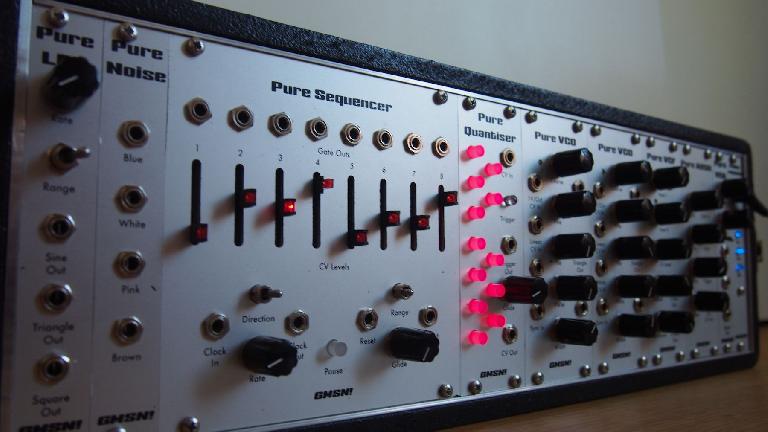