All Articles Review
Review: Korg Volca Mix
G.W. Childs IV on Sun, April 29th 1 comments
Korg has finally made a volca to link all your other volcas together. But it can do more than that, as G.W Childs discovered.

The volca series finally has a new addition. But instead of a new drum machine or synth, we’ve got something completely out of the blue, and completely needed. In this review I’d like to tell you about volca Mix and how it really ties a studio together.

It’s nice to finally see a new volca box! Thankfully, the new arrival comes bearing many fruits. A particularly welcome new feature for me is the three power cords which go from volca Mix directly over to power up to three additional volcas within your arsenal. This is particularly exciting as one volca Mix eliminates the need for either additional batteries or additional power cords. You now only have to rely on one included wall wart that connects to volca Mix.

The three dedicated, gold tipped audio cords are also a welcome addition for a cleaner audio signal and helpful in separating the micro patch cables (which, let's face it, get used for audio cables a lot when in a pinch) from the intended audio cables when you’re in a hurry. I was able to dedicate one pocket of my backpack to all of the cables, making it easy to keep all my volca accessories together for on-the-go and have everything I need for performances and sessions.

The built-in speakers are really fun when you’re in a public place and just want to have a quick jam session. Don’t get me wrong, you won’t be banging out any big bass beats over the little cones. But you get enough to get yourself moving. I love that they gave you a dedicated On/Off for the tiny speakers as well. There’s no need to worry about them sounding off on their own when pulling some cables, which can happen with other members of the volca family. 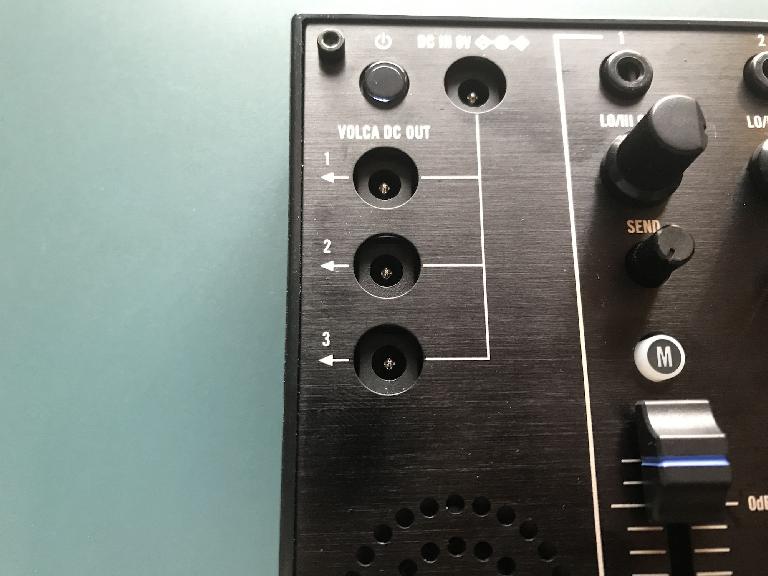 The Leader Of The Pack?

I’ve already begun thinking of volca Mix as the bandleader of the volca bunch. It supplies sync and maintains control, keeping other volcas in line. In fact, if one of the three connected volcas are connected and in Record/Standby mode, where the record button is flashing, you can cue three volcas at once from one Mix by simply pressing the Play button. 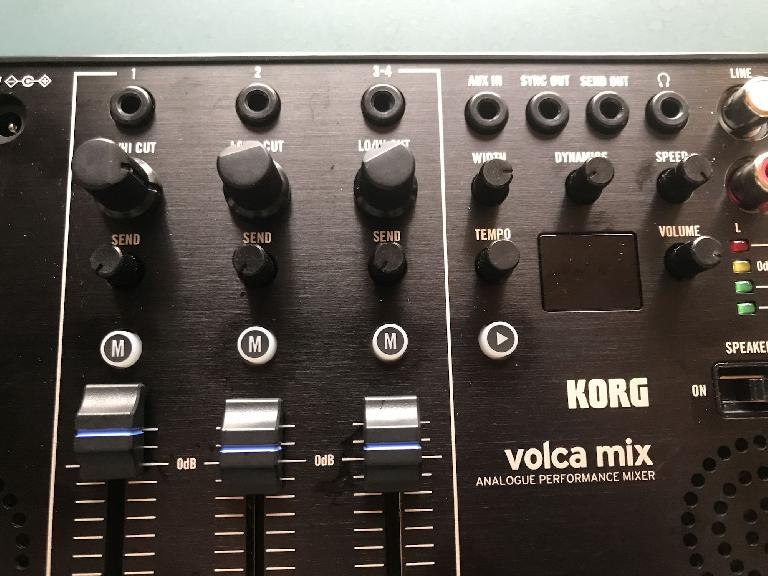 Korg made tempo extremely visible with Mix and its bright blue tempo display. This is the only area I struggled with - in dark rooms, against the other red LEDs on the other volcas, it’s a little hard to look at volca Mix. It’s crazy bright! A brightness knob would be helpful. On the swing side, you always know what your tempo is, trust me! 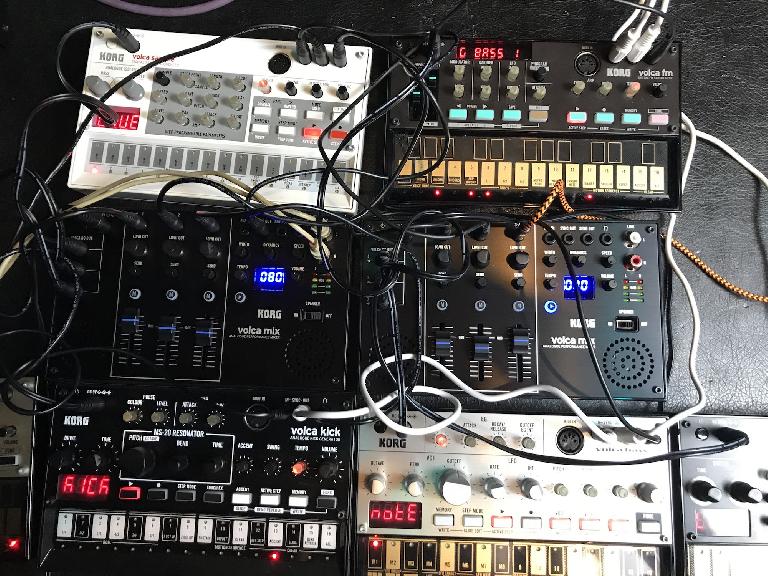 Faders and pots are nice and sturdy, and they’ve held up wonderfully through multiple backpack journeys. They are plastic as expected but the base of the faders and knobs are close to the surface of the faceplate, so you’d have to work a little bit to knock them off accidentally. Also, the action on the knobs and faders is actually pretty smooth for the size. It’s very possible and pretty easy to sweep in slow and smooth. 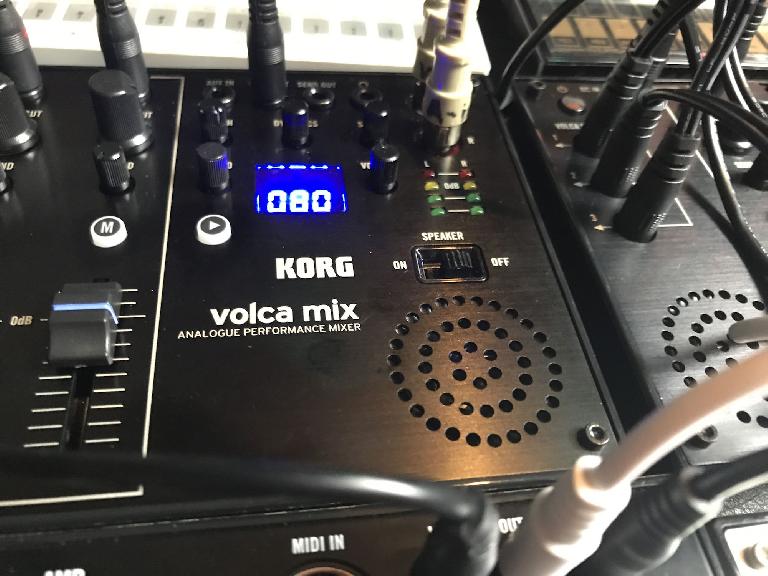 Strangely, there are no pan pots! There’s no way to manually fade the three channels left and right. Except for the Width knob, which resides in the Master Chain and actually controls a Stereo Expander, which spreads things nicely out over the sonic horizon. However, I still wouldn’t have minded dedicated pan pots. What there is though are Lo/Hi Cut pots on each channel to handle some minor to major EQ-ing that always needs to take place between the volca boys. And there are Aux Send knobs! Finally, there’s a Korg-supplied way to easily integrate a Kaoss Pad as an effect processor, or for loop playback, a second volca Mix. Or even as a method of A/B monitoring. Furthermore, the Aux in can be used to connect a fourth volca! 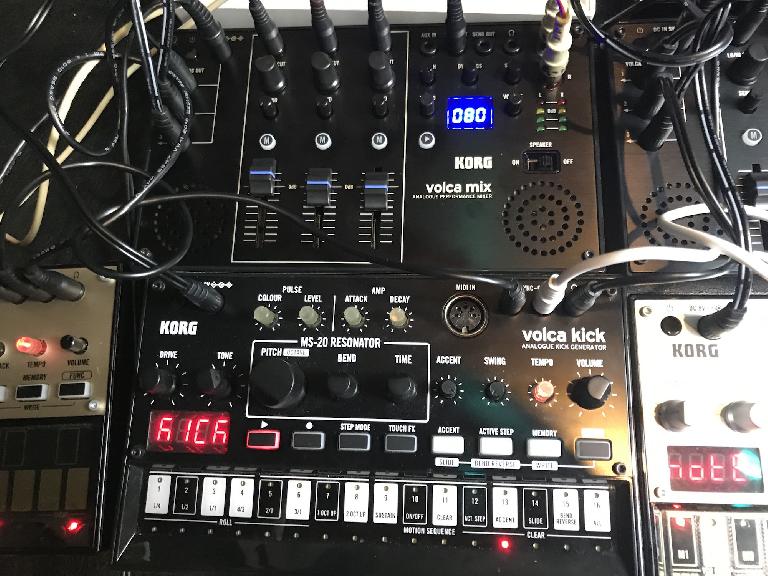 Finally, single click, blue-backlit Mute buttons finish up the channel anatomy, and behave most responsibly. Single taps toggle the tracks on and off. You can mute one at a time, or all three at once.

Dual, Stereo RCA jacks make up the main outputs of volca Mix and there's also a dedicated headphone output. Personally, I’d have loved to have seen at least 1/4” outputs. But it makes sense to go with RCA for the mains, as volcas are very popular in the DJ arena, and I’m sure Korg would like to see this trend continue and grow. The sound coming from volca Mix on my end was very clean. With help of the Dynamics knob, which adds mid/side compression to the volca Mix across all channels, I am able to easily sculpt a volca mix that sits well in my performance and has some nice punch at the same time. When you add the Speed knob into the mix (which sets the response speed of the Compressor's Envelope follower) it's very easy and fun to recreate side-chain ducks and pumps to get those heads bobbing. 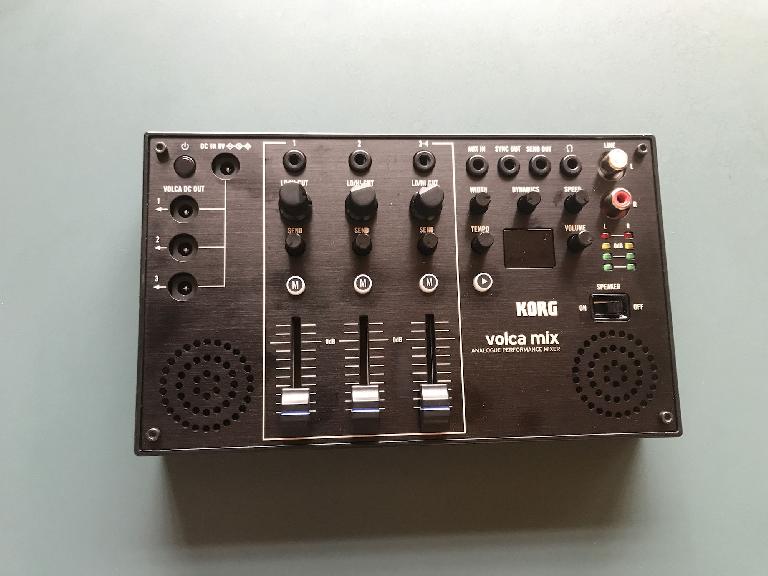 The spaghetti definitely flies once everything is connected. If you really want to hook yourself up, adding a few longer 1/8” cables to the Mix would definitely allow you to spread out more between units. Still, what comes in the box is more than enough. I was particularly pleased that channel four is actually a stereo channel, and is perfect for volca sample, which is one of the few stereo units. Being able to use Sample as a dedicated sampling drum machine is awesome with the small stereo Mixer, as it actually does have internal panning, allowing me to create a nice percussion environment within my mini Mix. If you’ve got Kick plugged in as well you have the ability to build a hugely thumping Hip-Hop Mix, with easy access to new fills, via Touch FX.

The only thing I would have liked to have seen was a way to send sync to volca Mix. It would be extremely nice to be able send sync via mini cables, and then have it re-transmit sync to the three or more connected volcas. But this is a minor complaint and definitely not a deal breaker. 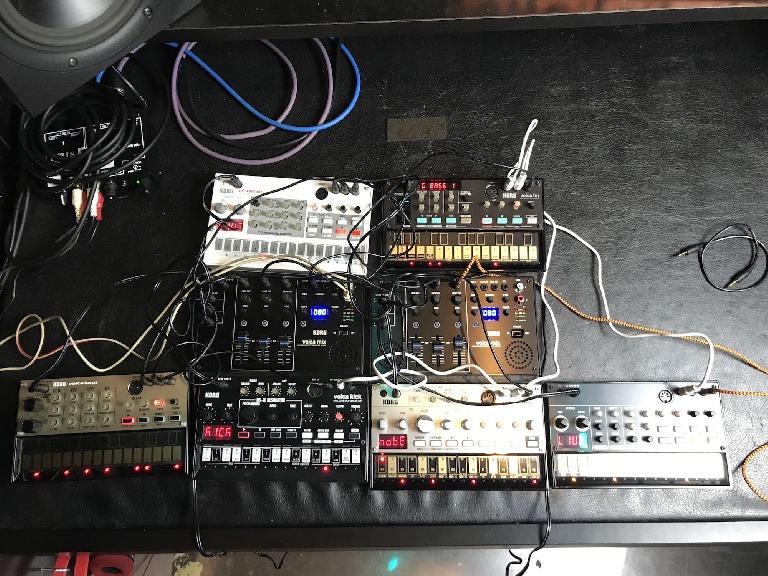 Volca Mix takes care of so many volca needs at once in terms of power, sound and sync that it’s almost a sin not to pick it up. This is especially true if you are new to volcas in general as it can save you a lot of money in batteries, power adapters and weird little adapters to hook your volcas up to other Mix devices. Korg gives you a well designed, one stop shop for volcas. As usual, it’s got built-in speakers so you know it’s going to be fun at the parties and on the go! I wouldn’t have minded seeing a USB port to bridge the gap over to my MacBook that transmits sync simultaneously. But Korg has been pretty good about keeping things purely analog, for the most part. Why muddy the water with computers?

Pros: Clean, powered mini mixer which will power volcas, provide sync for volcas, has an auxiliary and built-in speakers. It even has its own compressor.

Cons: Only sends Sync, cannot receive it. 1/8” and RCA outputs, only. No USB.