All Articles Review
Review: Korg XVP-20
Matt Vanacoro on Sun, August 21st 0 comments
Language
Matt Vanacoro puts the new Korg XVP-20 expression and volume pedal, the successor to the popular XVP-10 to the test. Is this MIDI pedal going to be the next big foot controller?

Is it possible to get excited about an expression or volume pedal? It is when they’re both crammed into a single device! I had a chance to test drive the Korg XVP-20 and I’ve determined it’s the fancy pedal that I didn’t know I needed until now. 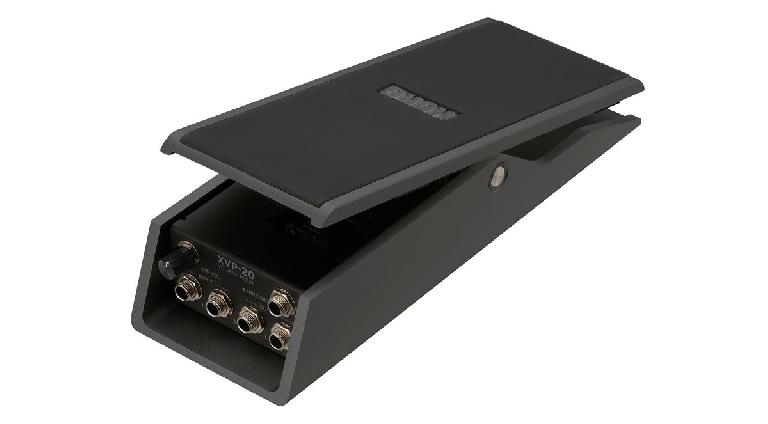 Sure, expression and volume pedals have co-existed since the mid-nineties, but I never had one—and I’m willing to bet most of you haven’t either. The expression pedal is often relegated to the outside pocket of a keyboardist’s gig bag and forgotten about until it’s time to call up a wah-clav patch or an organ swell. For many key jockeys, it never occurs to us that we could be using something better than the cheapest the market has to offer.

I’m used to the FC-7, which many of you are too, and we all know that pedal is quite large. The XVP-20 is constructed of sturdy metal with a rubberized surface for keeping your foot in place. It’s also extremely compact, allowing you to more easily transport it as well as find space for it on the floor when performing.

The pedal’s resistance can be adjusted, allowing you to customize the feel to your liking. This was key for me—I’m a brute and most control pedals seem kind of wimpy to me. I was able to get the XVP-20 to offer me some resistance, and this allowed me to be more precise with my filter sweep when playing live. Chalk that up in the win column.

The XVP-20 also has a minimum volume setting, something else that I found incredibly handy. If you want to be able to sweep between soft and loud (instead of ‘off’ and loud), you can!

Hands down, my favorite feature of the XVP-20 is that it performs double (some might say even triple if you count its stereo functionality!) duty as a standard audio volume pedal. You can hook this up to a synth’s foot controller port or CV port and use it to send MIDI values, or you can plug a single stereo synth (or even two mono keyboards!) in via audio and use it like a guitarist’s volume pedal. This is incredibly convenient for keyboards that don’t have a foot control input port. I absolutely love knowing that I can take this pedal with me and control MIDI data to my Kronos, but can also utilize some volume expression with my minilogue (which does not have a pedal input).

We can spend so much time worrying about the specs and quality of our main instruments that we sometimes forget to look at how we control them. Now that I’ve used the XVP-20, I’ll never go back to a generic foot controller. I’ve seen how fancy people play keyboards, and I want to be fancy too.

Cons: Absolutely none. Get one of these now.