Since the filter is a central part of most synthesizers, and goes such a long way to determine the character or flavour of the resulting sound, it should come as no surprise that there is a huge range of options available for eurorack. With so many offerings out there, it can be hard to choose one (or just one) for your system. Similarly, it makes it increasingly hard for manufacturers to make something that really stands out. Luckily for Make Noise, making products that stand out comes naturally.

QPAS stands for Quad Peak Animation System, which kind of sounds like a type of chair lift for ski resorts, or animation software for rendering mountains. In this case it’s actually to indicate that this module uses four two-pole, 12 db per octave filter peaks to add animation and life to external signals. Animation is an apt description, as the arrangement of these filters really excels at bringing life, movement, and dynamics to any source. 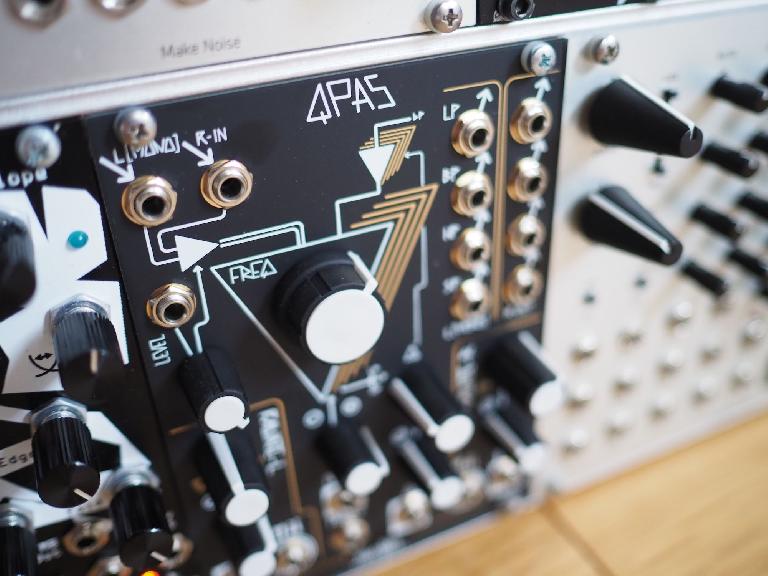 QPAS takes a mono or stereo signal, and processes it to provide eight simultaneous outputs. The usual low pass, high pass, and band pass options are there, along with something new called “Smile Pass”. Smile pass is a special type of filter designed to provide animation without reducing the bottom or top end. The result is fairly similar to a notch filter, but with four notches spread across the stereo field things can definitely get more funky.

If you haven’t already, it’s worth reading “The Story of the QPAS by Tony Rolando” on the product webpage. Tony explains that the inspiration for this new filter concept was rooted in his experience calibrating Moog Voyagers before he started Make Noise. He explains that while most people think of the Voyager as a mono instrument, he really loved the way the stereo filter output sounded with headphones to create an enveloping binaural effect that seems to put you right in the center of the sound. This is what eventually led to the arrangement of the four filters in QPAS. 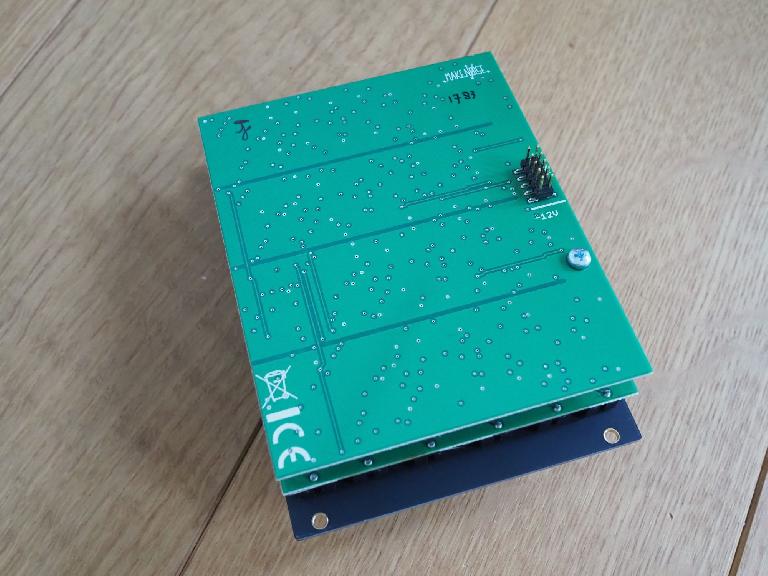 The module has a clever implementation of three filter cutoff controls to provide a balance of quick accessibility and flexibility. These controls consist of one satisfyingly large main filter cutoff knob, with two radiate controls that each spread two filters away from the central frequency cutoff. This ties in perfectly with the intelligent signal routing used by the QPAS. The left input is normalled to the right before passing through a stereo VCA. If only the left output is used, all four filters will be used in mono. If the right output is used, the filters will be split between the left and right channels.

This means that you can use QPAS in mono with either more extreme filtering from all four filters by using the mono output, or utilize more subtle filtering using just the right output. Of course you can also work comfortably in stereo with the option of summing to mono on all but the smile pass outputs. It’s even easily possible to use various configurations of stereo and mono outputs since all of the outputs are available simultaneously. This plays in very effectively with the more recent stereo-centered Make Noise modules, such as XPAN, Mimeophone, and Morphagene.

While QPAS does have plenty of resonance to emphasize the filter cutoff, it will not self resonate so you can’t use it as an oscillator like some other filters. However, it is pingable, meaning you can excite the filters by sending a gate or an envelope to the filter input. While using this method, the resonance functions a bit like a decay control, and determines how long the ping will ring out. This is similar to how many low pass gates function, so you can use it to get the classic Buchla bongo sound, but the glassy character of the QPAS means that you can also use this to create chime-like metallic sounds. QPAS is not set up to track 1v/oct, so while it is possible to create melodies while pinging it, they will not easily track with other elements in your system. 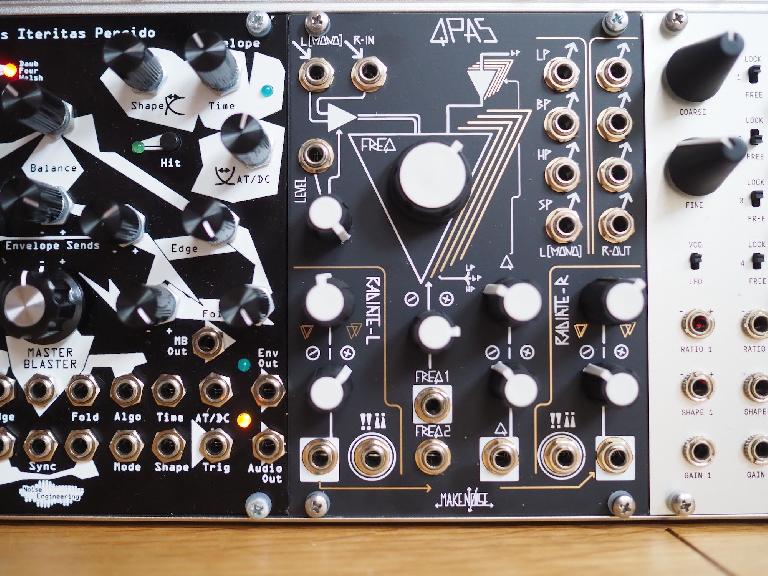 Another unique feature of QPAS is the intentionally mysterious !!¡¡ inputs. These provide another modulation input to excite or accent the signal and it’s recommended to use clocks, gates, or audio rate signals. I’m not entirely sure what’s going on at these inputs, but they each impact both the left and right channels and add a sort of percussive zap. My guess is that it injects a burst of additional resonance on the rising edge of a high voltage, since it will not sustain if a gate is held. I found these inputs really excelled at adding punch to rhythmic patches.

QPAS does a good job of feeling different, yet familiar at the same time. It’s worth mentioning that while writing this article I kept finding myself getting sidetracked wanting to try various things and see how it sounded. While most eurorack users will be familiar with synthesizer filters, QPAS offers up some fun surprises and invites users to take alternative approaches from other more predictable filter options. Yet despite its different approach, the faceplate is quite approachable and easy to follow.

Personally, I often find Make Noise panels confusing, but this one allowed me to jump in and have some fun without reading the manual. QPAS definitely has a characteristic sound, and at high resonance it has quite a glassy quality. It can easily evoke vowel-like formant tones by manipulating the spread controls, and these are also fantastic for creating sweeping psychedelic panning effects. If you’re after a filter that breaks the mould, QPAS might be your solution. 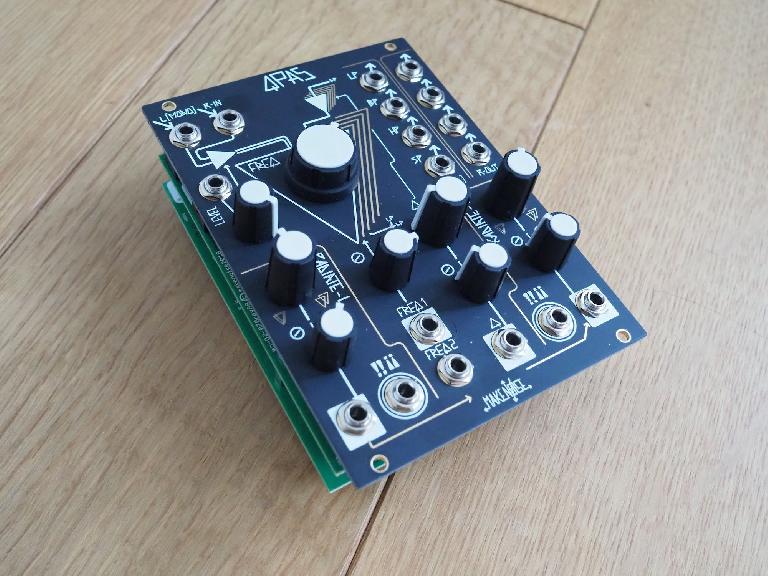 Cons: Does not self resonate; Does not track 1v/oct; No LEDs, so it will reduce your lights per inch (LPI) quotient.