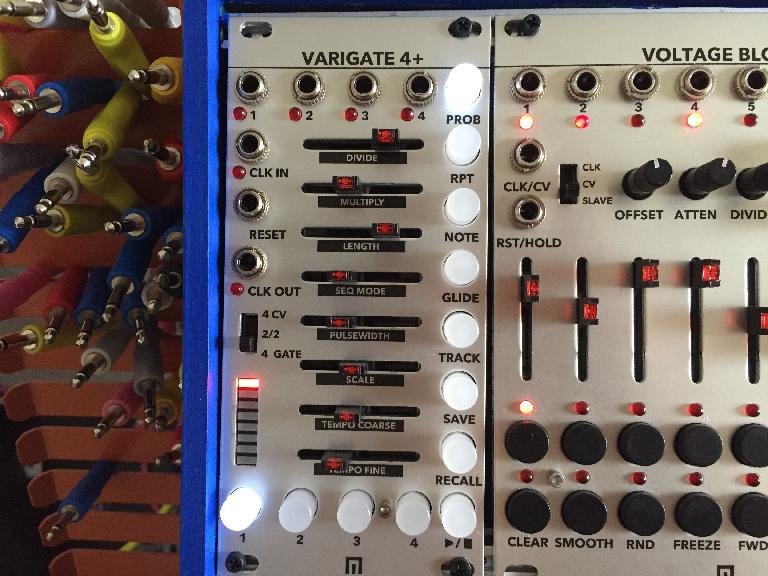 When choosing a sequencer for your Eurorack system you normally have to sacrifice size over functionality; that all ends with Malekkos’ updated version of the Varigate 4. What use to be a simple 8 step gate sequencer has transformed into one of the most powerful, compact, full featured modules on the market right now. Not only can the V4+ do everything the original could, but we now have a switch that allows us to choose between four CVs, four Gates, or two CVs and two Gates, making this the perfect brain for your small to medium sized setup.

So what else is new on the V4+? Well for starters, it can now be used as Master Clock. With the addition of a Start/Stop Button we no longer depend on anything to trigger the module, we gain a Tempo Coarse setting that can be set between 30 and 255 BPM which can be adjusted per Channels 1-4. We also acquire a Tempo Fine setting that allows us to fine adjust the clock +/- 25 BPM. Being a Master Clock means you can have Slaves; the addition of a Clock Out has been added right under the Reset Output. On the V4+ you will find all the same same Note parameters for CV that you would get on the Varigate 8+, Sequence Mode which allows us to set the sequencer using four settings; Forward, Reverse, Pendulum and Random.

There's Scale Mode for our CV Outputs, which allows us to choose between eight scales: Unquantized, Major Pentatonic, Minor Pentatonic, Blues, Dorian, Minor, Major, and Chromatic. And last but not least, the ability to save Presets - 16 to be exact! We can also save different tempos to different banks of presets. To save a preset simply hold Save and select buttons 1-4. To change banks hold Save + Recall then select buttons 1-4. To recall a preset simply hold Recall and choose between buttons 1-4. It’s a fairly simple workflow once you get used to the button combinations.

What most consider probably the biggest upgrade on the V4+ is the ability to use it as a standalone 2 Channel Sequencer. When the switch is set to the middle option of 2/2, Gate 1 and 3 turn into CV outputs while 2 and 4 turn into gates. By pressing the corresponding buttons, we can access parameters for each track. When on the CV tracks (1&3) we don’t have any control over the Probability and Repeat buttons, because those are tied to the gates (2&4). We do have access to Note and Glide. To set a note, move the sliders and wait for the sequencer to run through your sequence to hear the results. Glide creates a smooth transition between each step, farther to the right the Glide becomes more noticeable, while farther to the left the Glide is subtler. I find Glides are great for Asian inspired vibes, which I love. 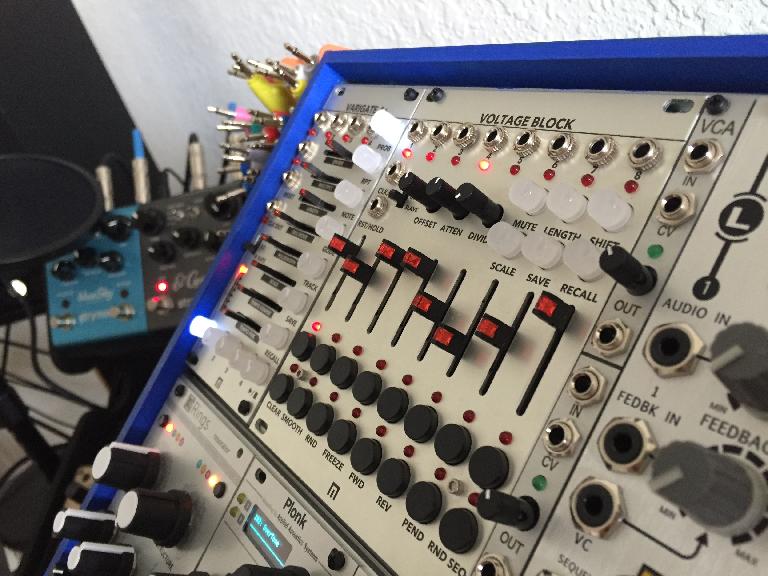 If you’re not familiar with the original Varigate 4 you probably don’t appreciate Note repeats as much as you should. Repeats are tied to our Gate; it creates Gate repeats on any of the 8 steps, which give us a type of retrig or roll, great not only for drum patterns but for melodic sequences as well. The Probability button is how we turn our 8 steps ON and OFF. All the way to the left the step is OFF, all the way to the right makes the step play 100% of the time. If you set the slider in the middle it will play 50% of the time, closer to the left there is a lower probability the gate will play, while farther to the right there is a greater chance of the gate being triggered.

These two features alone make the V4+ stand out from its competitors - unlimited variation in your patterns guarantee your music will be full of life and randomness. At only 12HP I can’t think of any other sequencer so feature packed and capable. Everyone wondered why the Varigate 4 had been discontinued but I’m sure no one is disappointed with the massive upgrade done to this module. Second hand Varigate 4s flood the used synth market as everyone tries to upgrade to the V4+. 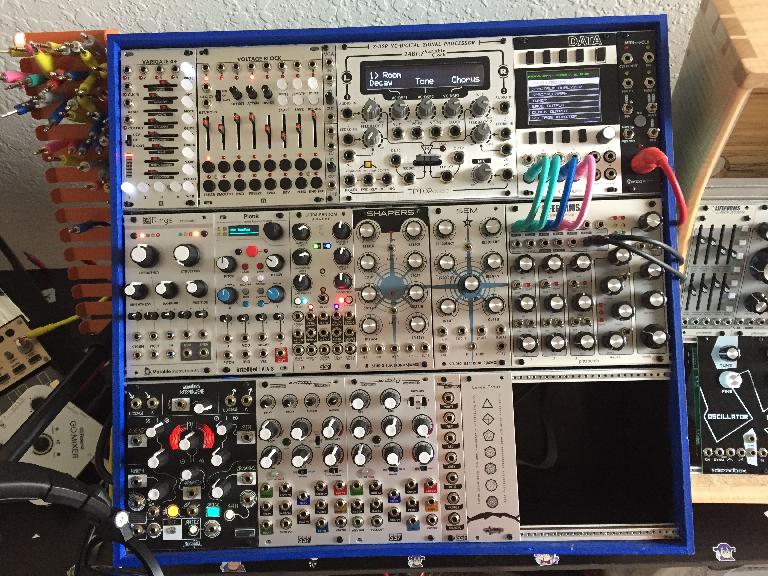 The Apple Doesn’t Fall Far From The Tree

So what inspired this massive upgrade? It’s not hard to tell Malekko had great success with their Varigate 8+ which was an 8 Gate and 2 CV Sequencer, but at 26HP it really made it difficult for those not-so hardcore Euro musicians with low real estate to justify the room for such a beast. 8 Gates is A LOT of things to trigger, and although the V8+ is an amazing Gate sequencer with Mutes and Song Mode, having only having two CV outputs made it hard for people to consider it the only sequencing option you needed. This wasn’t by accident: the V8+ wasn’t meant to be a standalone sequencer. For the V8+ to shine you need to pair it with the Voltage Block, which gives you 8 CV Outputs. An amazing combo if you have the funds and space in your case, but not for everyone; the V4+ however can easily find itself in any setup, perfect for small and big systems. 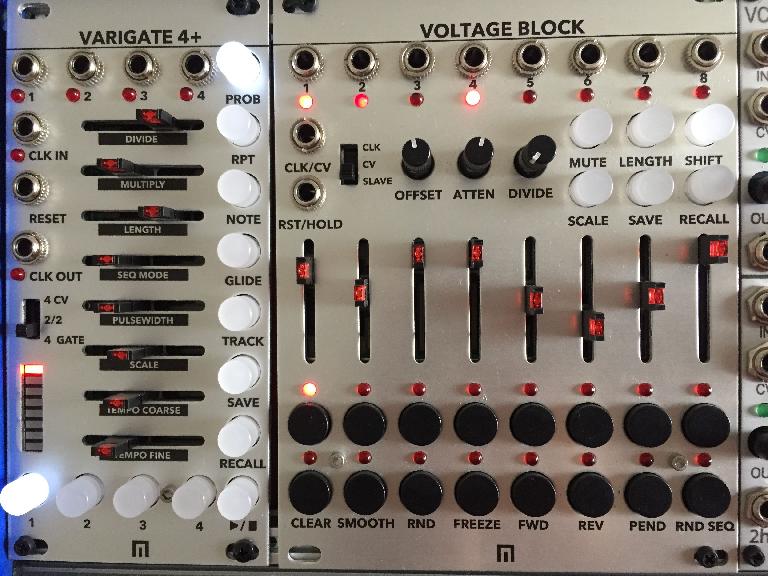 Me Master, You Slave

As I mentioned before, one of the new additions to the V4+ was the ability to use it to clock the rest of your system, but what I didn’t mention was that just like the V8+ the V4+ in combination with the Voltage Block makes a killer combo. For starters, the V4+ will clock the Voltage Block with no patching necessary if plugged into the same power strip. Unfortunately, it doesn’t add any more presets like the V8+ and Voltage combo does (you get 100 presets when used together), but you can use the v4+ like a mini V8+, leaving it with gate duties and using the CVs on the Voltage Block for pitch and modulation.

With or without the Voltage Block the Varigate 4+ is a great standalone sequencer and its small size doesn’t compromise its functions.

Cons: Really can’t think of any.