For ensemble recordings or live performances, musicians’ monitoring systems range from simple to complex. At the most basic level, all the players in the ensemble are fed the same monitor mix, or cue mix, created via pre-fader sends by the engineer at the board. More comprehensive monitoring setups will provide different musicians with their own individual mixes, though still dialed up by the engineer, following the players’ requests.

At the high end, not only do the players get their own individual monitor mixes, but they’re all provided some control over those mixes, so each performer can customize what he/she hears in the cans (or in-ear monitors), without having to compromise, and without having to distract the engineer from other setup and recording or mixing tasks. These systems typically matrix the audio channels into distribution hardware which then provides each musician with a small personal mix box with several instruments or stems plus their own instrument or voice, all of which can be mixed to their individual satisfaction.

This Mix Is Mine..

MyMix takes this concept to the next level—their system is a customizable Ethernet-based network for studio, stage and other applications, that can easily be scaled from smaller setups to larger rigs. MyMix is not the only company that makes networked monitoring solutions, but this system is one of the more flexible and full-featured products around.

Various applications for the MyMix system

The MyMix hardware is a compact box (5.3”x6.7”x2.4” WxHxD), with a pair of balanced mic/line inputs (XLR/TRS combo jacks) and outputs (TRS) and, of course, the network connection—the system uses Fast Ethernet (100Mbps) on CAT5 cabling. 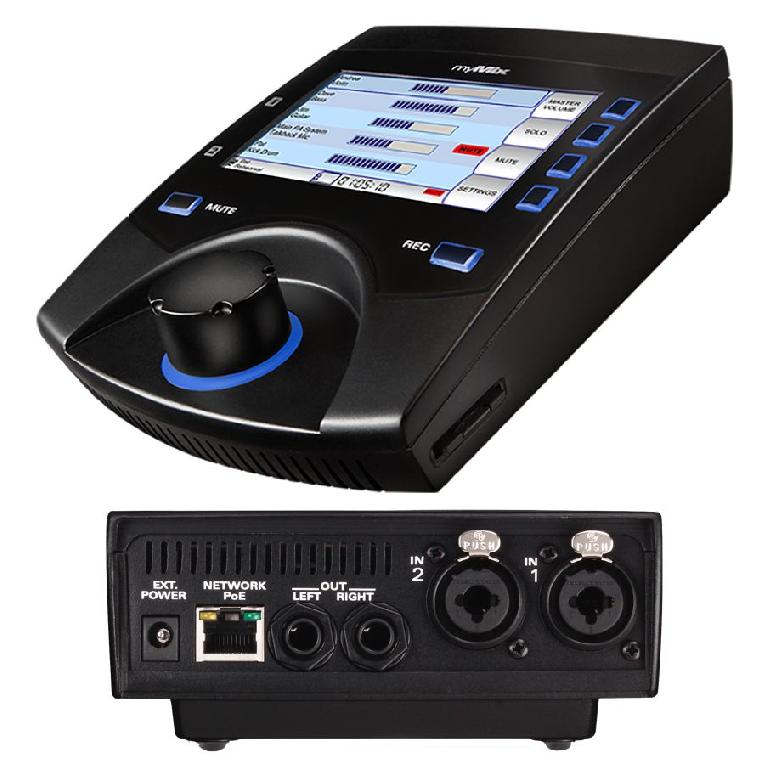 The MyMix box (top and back panel)

The onboard inputs can be combined with (up to 16) inputs from the network, and each box’s inputs are available to other MyMixes on the network. The top of the MyMix box consists of a color screen and large jog wheel/encoder button, plus a few additional soft buttons. On the left side are gain pots for the two inputs, plus a stereo headphone jack. The box can sit on a desktop or be stand-mounted, and a “studio-mod” version is available with a quieter fan for recording studio use near sensitive microphones.

Each MyMix box allows for mixing up to 16 channels; a mix done on one box can be distributed to others on the network, for more individual flexibility in selecting channels or submixes. If 16 isn’t enough, another MyMix box can be added, for 30 channels (2 for the submix of the first box). I think for the typical performer who simply wants to tweak his/her mix, too many channels could easily become a distraction, but it’s good that this level of flexibility and expandability exists. For setups with more than 2 MyMix boxes, an Ethernet network switch will be needed.

An optional SDHC card can add recording capability (24-bit 48k wav)—audio can also be played back from the SD card. The network itself can carry > 500 channels, with each user selecting 16 for his/her personal mix (the flexible subgrouping makes this even more capable); and each MyMix, as well as all the individual mix channels, can be named by the user(s), for convenience (easier to quickly make a tweak to “Joe’s Guitar” than remembering what instrument “Channel 02” is).

Some screens from the MyMix box

Frequency response is listed at 20-20k +0/-1dB, with >104dB SN, and network latency is spec’d at < 2ms, so there should be no problems with either sound quality or timing.

The box can be operated standalone, and several can be networked together for mixing and monitoring without a console. For use with a traditional recording console or live mixing board, the IEX16L line-level expander/distribution unit takes 16 analog channels (or 16 ADAT channels, with the IEX 16L-A) and distributes them to the networked MyMix boxes via an Ethernet switch.

A couple of suggested hookups, for Project Studio and Live Band applications (from the MyMix website)

For larger setups with multiple units, the company offers MyMix Control, a browser-based software application that can serve as a remote command center for configuring and managing multiple MyMix boxes and IEX expanders.

While the individual MyMix box isn’t cheap, and larger setups could potentially be somewhat complex to configure (especially for those not as well-versed in Ethernet networks), the flip side is that you get a highly capable and flexible system that can be adapted to a wide range of installations and uses. For more traditional personal monitoring applications in the studio or on stage, once a system is configured, the MyMix box itself should prove simple to work with.

Performers may find they want to be able to make tweaks to the monitor mix they’re playing to throughout a recording session, as arrangements and instrumentation change, and the MyMix system should make this a relatively quick and painless process. And for live monitoring, the ability to save up to 20 different Profiles (all mix/configuration settings) should make it easy to accommodate different situations. Add in the extra mixing and stereo (3D) effects for those using in-ear monitors, and you’ve got a pretty comprehensive system that should be able to serve just about anyone’s monitoring needs.

Learn more about mixing and monitoring in the Ask.Audio Academy.