It was a happy day when Pioneer DJ's DJM-250MK2 arrived in the mail for review. I'm always excited to try out new DJ mixers, especially when they're made by Pioneer DJ. This new two-channel mixer looked amazing when I took it out of the box, but would its sound quality and build match its stylish appearance? I gave it a test run in an afternoon scratching and mixing session. Here's what I learned. 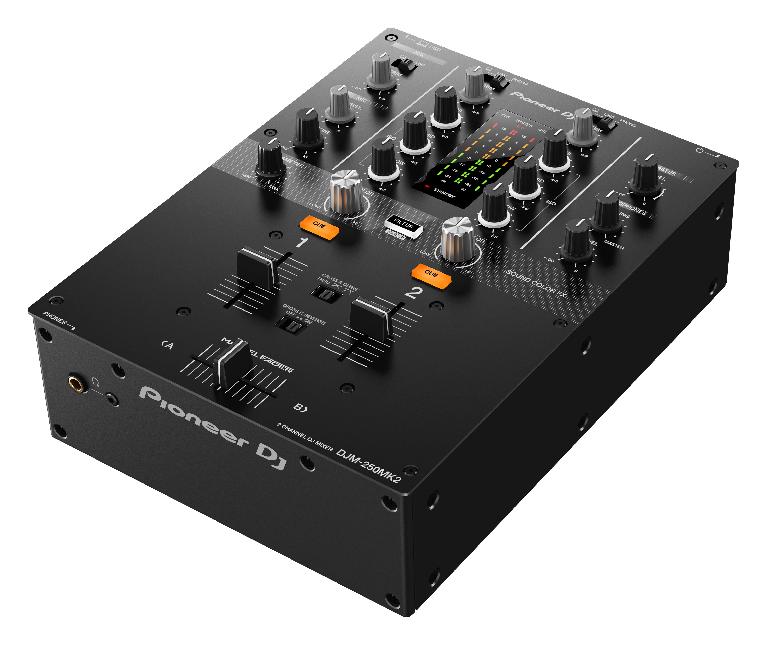 The Pioneer DJ DJM-250MK2 mixer is a two-channel DJ mixer that's made for scratching and mixing. Its two channels feature three band EQ, Magvel crossfader and Sound Color FX. I like the simplicity of the layout; all the controls are clearly visible and located in traditional positions. The crossfader area on the mixer allows turntablists enough room for comfortable scratching. Audio wise, the mixer sounds great as it includes dithering technology that produces high quality audio from digital or analogue sources. 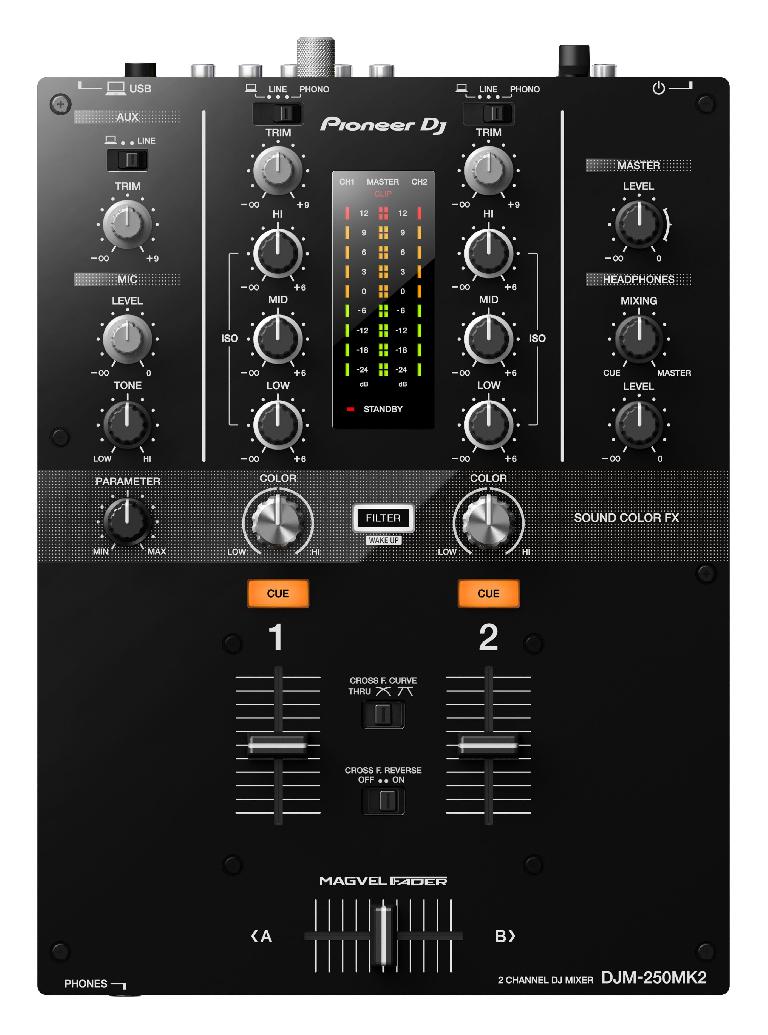 On the rear panel of the DJM-250MK2 there's a DC Input, two Master Outputs with XLR and RCA connectors, Phono and Line Inputs for Channels One and Two and an Auxiliary RCA input. There's also a 1/4” unbalanced input for a microphone and a USB input for a laptop. 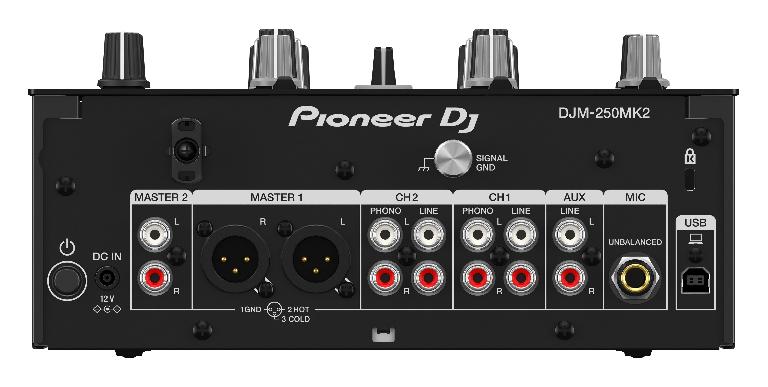 The mixer has a small footprint, with dimensions of 230 mm wide x 108 mm high x 320 mm deep. It is small enough to integrate into any DJ setup and will take up less space in the studio than a traditional mixer. It's also simple enough for kids to use and it could be a better solution for young DJs than many of the larger and more elaborate models available on the market. The DJM-250MK2 features a Magvel Pro crossfader and two channel faders that are a pleasure to use. The crossfader feels great when scratching or cutting and turntablists will be happy with its solid build construction. Inside a Magvel Pro crossfader, two metal shafts support the fader knobs, while the contact-free magnetic system is designed to withstand millions of movements. On the mixer's faceplate, there is a crossfader curve that switches the function's characteristics, as well as a crossfader reverse switch. I personally found the channel faders to be a little stiff, but with frequent use they may loosen up a bit. The quality of the crossfader is one of the features that make the DJM-250MK2 a professional mixer that's suitable for mixing, scratching or battle use. 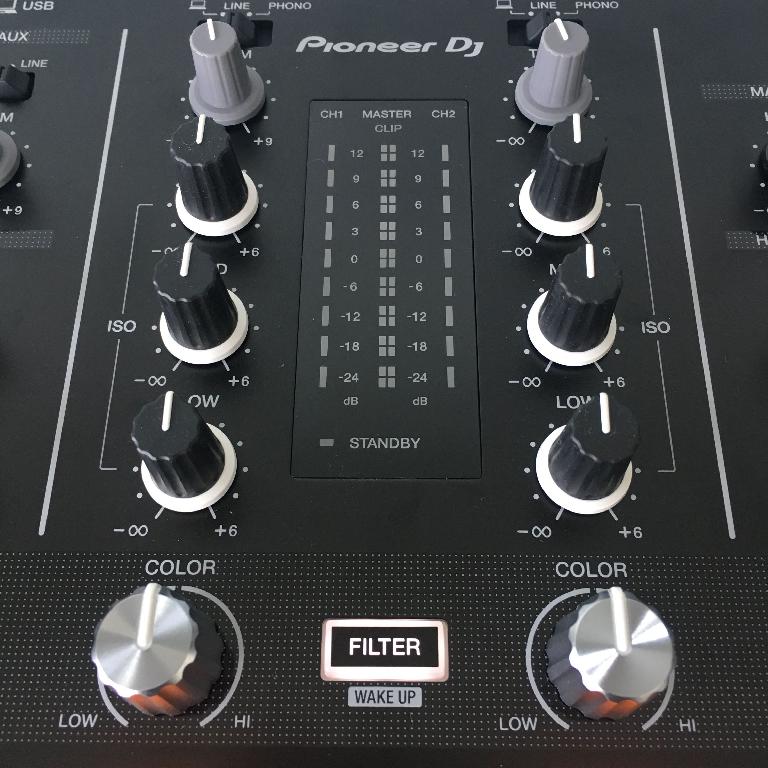 Moving up on the mixer, each channel has its own dedicated three band EQ. Each EQ knob lets DJs mix precisely with exacting precision. The EQ knobs can be used to completely eliminate each frequency range when they are turned all the way to the left.

The DJM-250MK2 includes a built-in sound card that connects to a PC/Mac. The USB connection supports input and output so that mixes can be recorded to a hard drive. The sound card is a convenient feature that makes recording sets a snap. 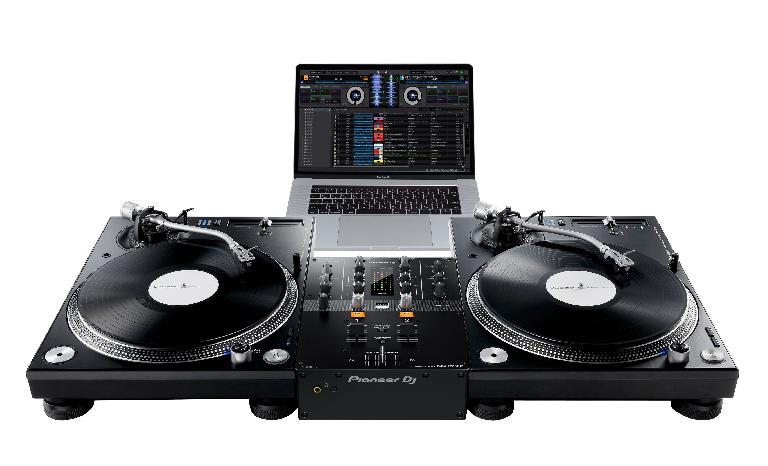 rekordbox users will appreciate that this mixer includes heavy rekordbox integration. It comes packaged with a free rekordbox dj license. A free licence key for rekordbox DVS is also included, which is ideal for scratching or mixing with Pioneer DJ's CDJs or XDJs. DJs who prefer to spin with vinyl can also use rekordbox with analogue turntables and control vinyls. (Please note that the control vinyl is not included with the DJM-250MK2) 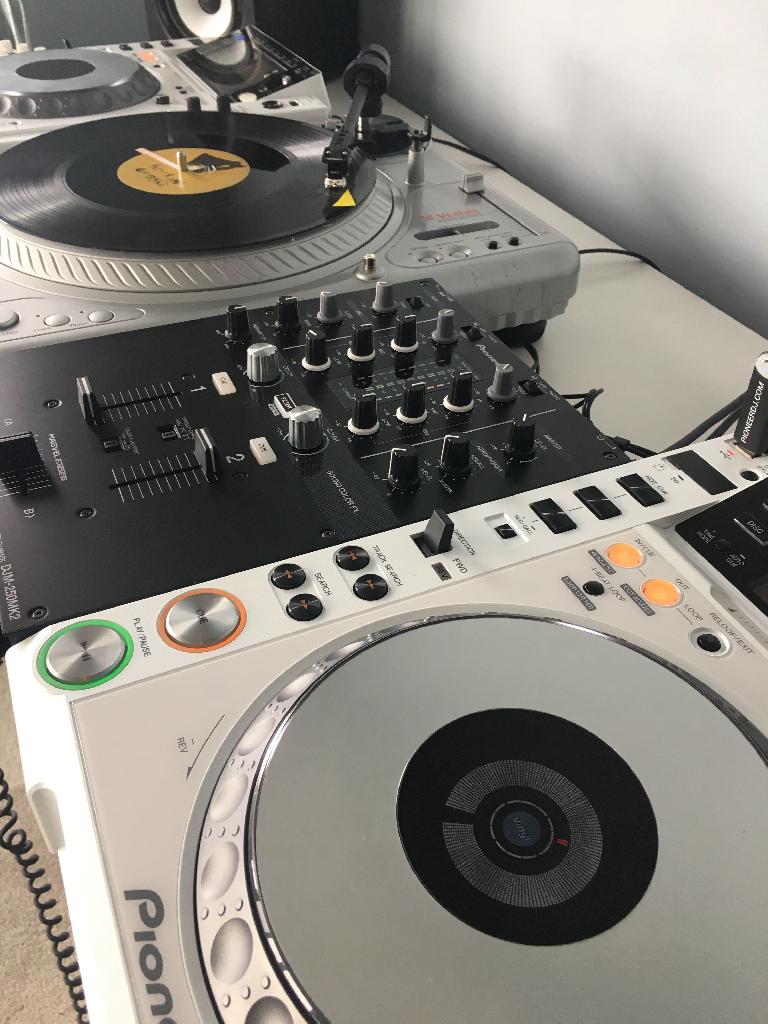 I really enjoyed using the Pioneer DJ DJM-250MK2 mixer. It is an attractive, small mixer that functions and sounds like a professional mixer. The quality of the crossfaders and Sound Color FX are elements that really make this mixer shine and stand out from other mixers on the market. Turntablists and mix DJs alike will enjoy using its classic, well-designed layout.

The DJM-250MK2 is affordably priced so even DJs on a budget will be able to invest in one. I'd recommend this mixer for beginner DJs, scratch or mix DJs, or DJs who are looking for Pioneer DJ's mixer features in a smaller size. The DJM-250MK2 is great for the studio or for smaller road gigs, as it offers Pioneer DJ's legendary high quality in a straightforward two-channel mixer. Overall, I love this mixer and it will be difficult to pack it up to send back to Pioneer DJ. Highly recommended, especially for turntablists.

Cons: It is two channel mixer, which does limit the type of mixing you can do. The channel faders also felt  a little stiff to me.

Improve your DJ skills with the great DJ courses in the Ask Audio Academy here.