All Articles Review
Review: Pioneer DJM-S9
Sara Simms on Sun, February 14th 0 comments
Language
Pioneer DJ's DJM-S9 is designed and built for turntablists and especially those who use Serato. Sara Simms puts this DJ scratch mixer to the test to find out what good things it offers.

The Pioneer DJM-S9 is Pioneer DJ's latest mixer that's specifically made for turntablists. Optimized for use with Serato, the mixer features magnetic cross faders, and plenty of effects for creative routines and sets. With so many scratch mixers already on the market, I put it to the test to find out what makes this mixer stand out from all the rest. Here's what I learned...

At first glance, The Pioneer DJM-S9 is one good looking mixer. It features a smooth, almost reflective surface on the top half of the mixer, and a matte finish on the bottom half. The mixer is built solidly, and feels tough enough for the rigors of battle DJing yet still maintains an elegant and refined appearance. It’s a two-channel mixer that's equipped with two internal sound cards that are compatible with Serato DJ. Here's a video of the scratch session I had using the DJM-S9.

At the top of the mixer is the browser section, which features an input select (DJs can choose between the two USB inputs, or CD/line or phono) a standard three band EQ, trim and filter. One thing I noticed right away is the trim is not in the traditional location; it’s located beside the three band EQ, rather than above it. This may take DJs a little time to adjust to, but this is easy enough to do with some practice. There's also master and booth level controls, as well as a panel/utility and a shift button.

On both the left and right hand sides of the browser section are browse knobs (that work for both scrolling through Serato playlists and the Tree). You'll also find a button that activates a four-beat loop, and separate buttons that cut the loop in half and double the loop. I particularly like how the browse knob can be used for scrolling through either the playlists or tree; either mode can be toggled by pressing down on the button. 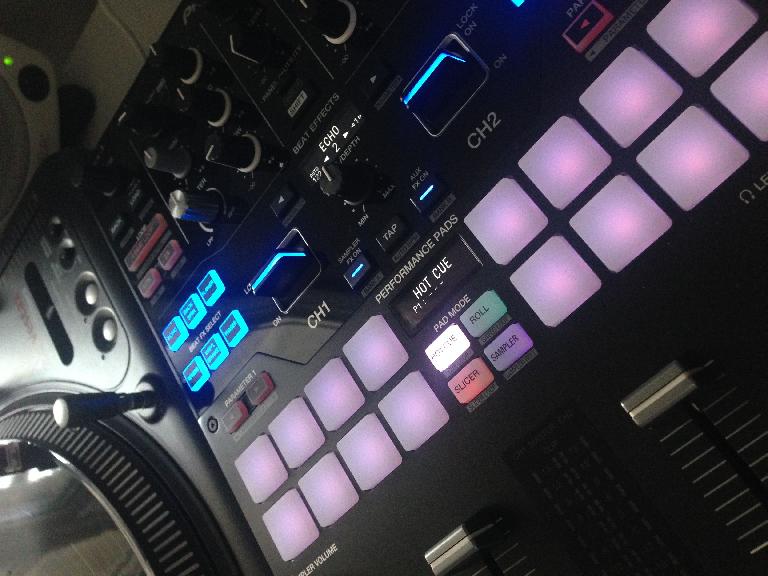 Moving further down the mixer is the effects section. On the left-hand side of the mixer are six Beat FX Select; Echo, Back Spin, Flanger, Reverb, Vinyl Brake, and Phaser. The controls for turning on and off the mixer are quite creative; Pioneer has added two large sliding buttons that can be positioned up to lock the FX on, or positioned down to quickly throw the FX into the track and then release them. The Beat FX sounds great; they're classic Pioneer quality and I'm sure turntablists will appreciate the Back Spin and Vinyl Brake FX that have been added to the mixer specifically for their DJing style. Each FX parameter can be adjusted with the parameters button and the depth of the FX controlled with the level/depth control knob.

On the right-hand side of the mixer are controls for Serato DJ FX Select, and a Sampler FX button. The FX can also be applied to the Auxiliary Input, and turned on with the Aux FX On button. Further down are the multi-color Performance Pads, which look and feel great. The pads can be used for Hot Cues, Roll, Slicer and Sampler, and each can be selected with the touch of a button. The Performance Pads can be useful for incorporating a controllerism element into sets, and adding extra effects. 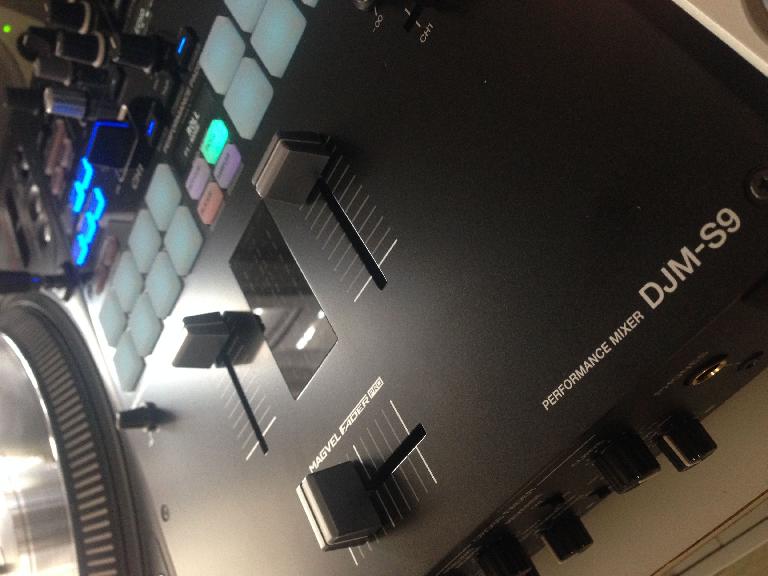 My favorite part of the DJM-S9 is the mixer section because of its simplicity and the quality of the crossfaders. The cross fader itself is a Magvel Fader Pro magnetic crossfader, which feels just right from a turntablist's perspective. The cross fader has a 'Feeling Adjust' that ranges from light to heavy and an adjustable curve. Both channel faders have a selectable volume slope on them, and all three faders are reversible. All of these adjustments can be made from the front panel of the DJ mixer.

The front panel itself has a front guard on either side, which I thought was a thoughtful addition that might potentially help the mixer to stay in good shape, especially when on the road. There are two headphones inputs (1/4” and 1/8”) and controls for the Microphone Input, including a two-band EQ and Echo. I like the fact that the Mic controls are on the front of the mixer; this saves valuable space on the top of the mixer and keeps the layout looking clean. The echo on the mic is yet another creative addition to the DJM-S9, and would be a lot of fun to use during live shows with an emcee. 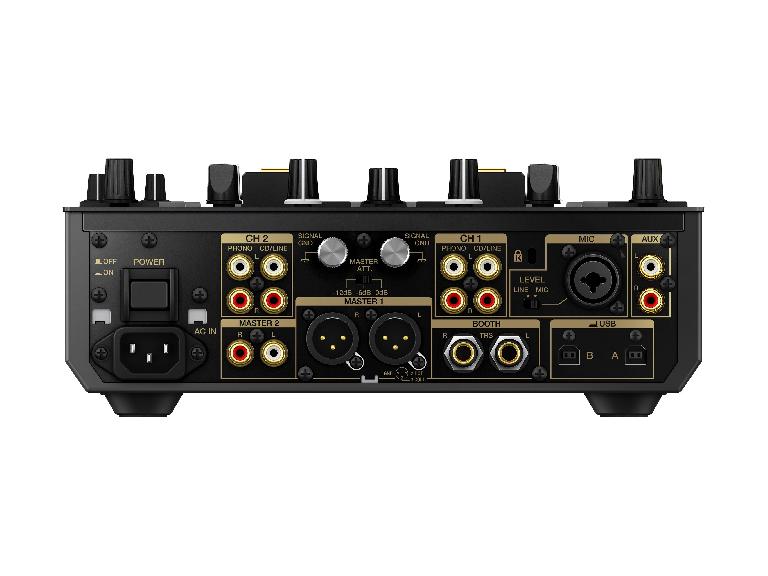 The rear panel has a standard AC input, and two channels with inputs for phono and line. There's two signal ground terminals, which are good quality builds. There's two master outputs, one XLR, one RCA and a 1/4” booth output. There's also a master attenuation level selector switch, which is rare to see on mixers and allows DJs to select the level they'd like to have come out the Master terminals. (-12 dB, -6 dB and 0 dB) Lastly, there's inputs for two USB ports, which means you can play back to back with other DJs seamlessly using the input selector on the top.

There's a special gold edition of the DJM-S9 available. It looks quite incredible, and only 500 kits will be available worldwide. The gold DJM-S9's will only be available in a kit with Pioneer DJ PLX-1000 turntables; not available for purchase separately.

Overall, this is a fantastic DJ mixer for scratch DJ's who use Serato. The cross fader is a real selling point, because it feels so natural to scratch with the magnetic fader. I think it's hands-down the best cross fader I've tried out on a Pioneer DJ mixer. It’s really easy to get setup on; since there's no external sound card required, the setup is quite fast and easy. Thanks to the two USB inputs, it’s also great for playing with other DJs or transitioning between sets.

There are a couple things that I wish were included on this mixer, with the number one being four channels. Although most turntablists will likely just use two, it's standard that most DJ programs offer four deck mixing. I also recognize that one of the reasons this mixer does have a small footprint is because of the fact that it only has two channels. Being primarily a Traktor user myself, I would love to see a mixer like this made for Traktor.

The Pioneer DJM-S9 is a great DJ mixer that offers a world of possibilities for the turntablist/scratch DJ. With great quality crossfaders, effects galore, two USB inputs and unique additions like echo on the mic, the DJM-S9 is sure to become a new standard for battle and scratch DJs.

Cons: Trim pots are located in a non-traditional place, Only two channels, Traktor users will really miss out with this mixer, as it's optimized for Serato.