Scanned is a bit of an oddball synth module, but that’s OK, because eurorack is all about oddballs. Superficially, it rather oddly has a past tense-style name. More importantly it represents the first hardware implementation of an obscure and largely unknown form of synthesis called Scanned Synthesis. Qu-Bit refers to it as an Organic Wavetable VCO which is a convenient simplification, but still rather mysterious.

A Quick Scan Of The Data

After looking into Scanned Synthesis, my understanding is that it is somewhere between wavetable synthesis and physical modelling. In this technique, an algorithm is created to simulate a string with a series of attached objects and controls over the behaviour of the string and objects. In physical modelling, this sort of system would be used to synthesize the sound of the string, but in the case of scanned synthesis the string vibrates at around 15Hz, which is too slow to be audible. Instead, a snapshot of the waveform produced by the vibration of the string is scanned and used as a wavetable. 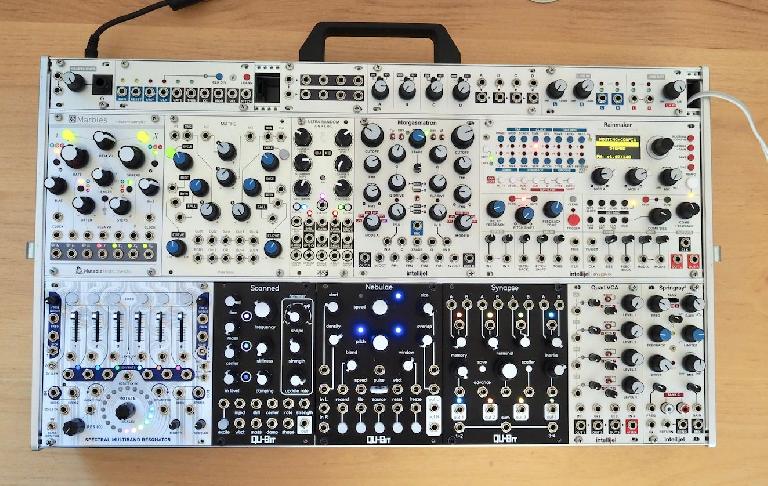 The size of the wavetable is determined by the frequency of the oscillator. The idea is that the string and objects will oscillate slowly and interact with each other, which will cause the timbre to slowly evolve while keeping the pitch constant. This technique was designed not to mimic any real world instruments, but to create new timbres using the principles of actual instruments. The result is a digital sounding oscillator that evolves in an organic way.

Scanned synthesis was invented in the late 90’s by Max Matthews and Bill Verplank, with inspiration from Jean-Claude Risset’s work on haptic frequencies and the human perception of sound. Matthews earned his status as the father of computer music by developing MUSIC, the first widely used program for generating sound all the way back in 1957. 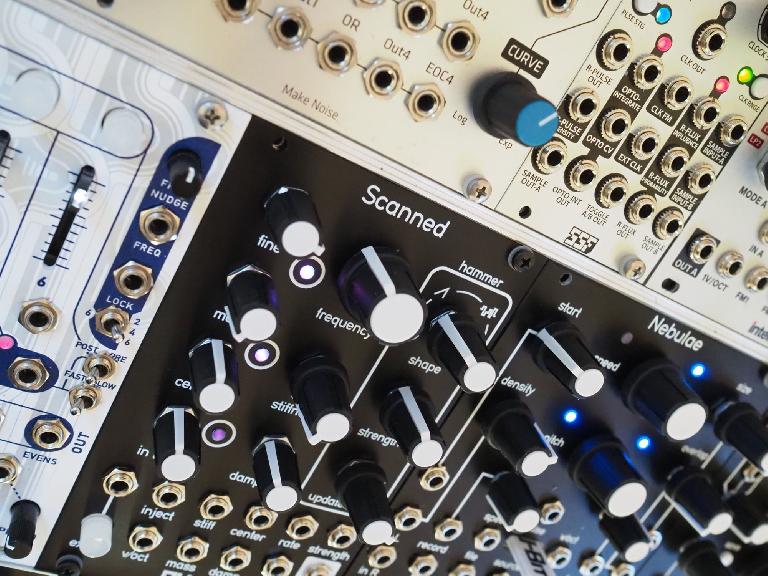 Having an idea of how scanned synthesis works will help to make the Qu-Bit Scanned module make a little more sense, but it’s not a necessary prerequisite to have fun making some noise with it. The concept behind Scanned means that it does not function like a regular oscillator, but it also enables it to work as a standalone voice. To get the system vibrating, a virtual “hammer” is used, which is a metaphor for a rather amorphous excitation signal.

The hammer has its own shape control sweeping from sine wave to noise, along with a strength control, and an excite trigger with a gate input. One way to understand these controls is to imagine the excite controls causing the hammer to strike or pluck, while high strength settings apply a force as if the string is being bowed. Of course these two methods can be used together or separately and modulated. The hammer section also has an update rate control, which determines how often the module samples the waveform, so it actually affects the entire system’s sound character. Low values can create rhythmic pulses, while higher values can introduce sideband harmonics.

To control the behaviour of the virtual string and connected objects are controls for mass, stiffness, damping, and center. Mass controls not just the string, but the mass of all objects in the system from smallest at counter clockwise, to largest clockwise. Turning the knob up actually decreases the mass of the virtual objects, but that is because objects with more mass cause more damping to the sound, while lighter objects have less impact on the movement of the string. With mass turned clockwise, notes ring out longer or even swell from nothing like a rush of feedback, depending on the settings of the other parameters.

Stiffness determines the strength of the connection between the string and objects. Counterclockwise values will have low stiffness, and this floppy connection will cause less interaction between objects. Damping sets the amount of negative energy added to the system to absorb the vibration. With this control, turning clockwise actually decreases the damping added and allows Scanned to function more as a standard constantly outputting oscillator. While I thought center would determine the hammer or scanning position, it actually sets the amount of gravity toward the center of the waveform. Clockwise higher gravity settings will cause a more rapid change to timbre as harmonics are pulled back to center, while low gravity will induce slower timbral changes.

Lastly we have coarse and fine frequency tuning controls, along with an external audio input called inject with a level control. Injecting an external signal adds a further excitation to the generated waveform. I discovered that by sweeping the frequency of a sine wave injected into the external input, certain pitches would create interesting timbral responses. It was almost as if it was causing sympathetic resonances. Injecting drums also yielded some cool rhythmic tones that would layer nicely with a groove. 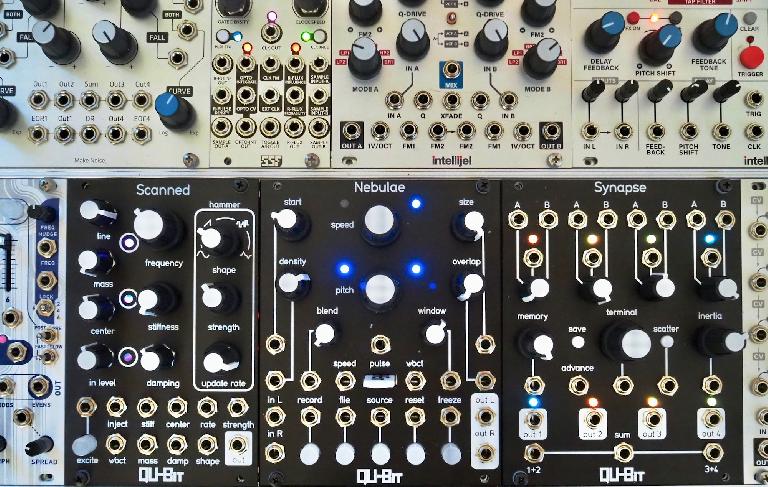 Organic is a good way to describe Scanned because it has a very fluid character. It seems to be constantly changing and evolving, which prevents the tone from becoming stale or repetitive. The interplay between the controls is quite compelling and really rewards active manipulation. During my first explorations with the module, I found it a little unstable and unruly, but that was before I had read the manual and understood what was going on. To gain a better understanding of Scanned Synthesis I also looked over a short article by Max Matthews and Bill Verplank. Scanned is a module that defies a simple explanation, and similarly it defies a simplistic approach. The controls have plenty of sweet spots, but they also have settings that can rather suddenly kill the output.

Rather annoyingly, I was not able to escape one quirk where sometimes activating excite would cause a noticeable click in the output. You’ll be able to hear this in some of my recordings, and I’m guessing this is probably due to abruptly cutting the amplitude of a low frequency wavelength. I asked Qu-Bit about this and they told me it was a known issue and more pronounced when hammer is set to sine. They plan to fix this in a future firmware update that will be installed by playing an audio signal into the inject input. Other than that, I really enjoyed using Scanned and the unique morphing timbres I was able to achieve.

If you’re looking for a wavetable oscillator or a physical modelling voice, Scanned probably isn’t the right choice. But if you’re looking for something truly unique, with a character that will continue to entice and surprise you, it might be worth giving it a scan.

Cons: Excite trigger is prone to causing clicks in the output (but should be fixed in a firmware update). Can be unruly and unpredictable if you approach it haphazardly.

Learn more about the science of synthesis: https://ask.audio/academy?nleloc=category/audio/topic/synthesis