Samson’s G Track Pro is the ‘big daddy’ of their USB condenser mic line in both the feature and the physical senses. When the G Track Pro arrived on my doorstep for review and I unboxed it, I not only added a new mic to the closet, but I also felt like I was acquiring a new self defense tool. This mic is no plastic, entry level toy - it’s a behemoth! 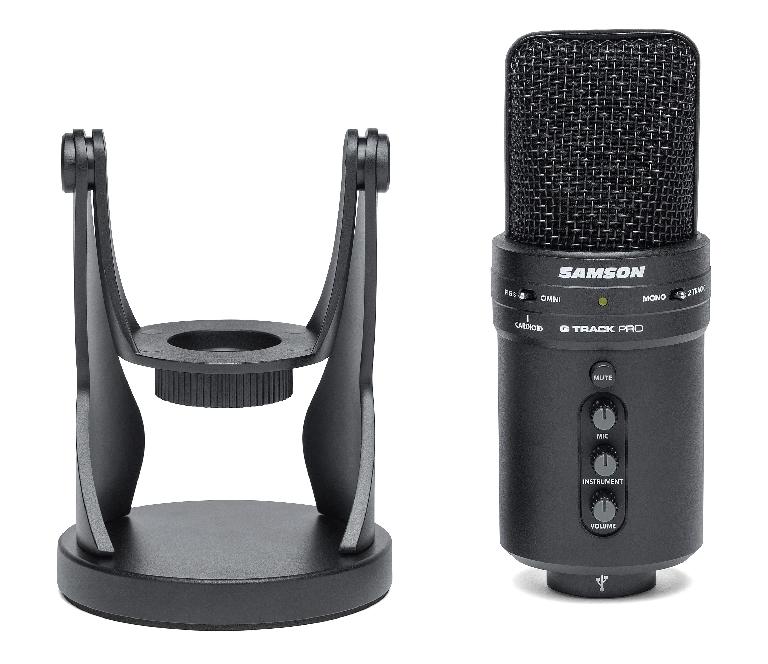 The G Track Pro is solidly built and extremely rugged. The accompanying stand is also a nice, solid chunk of metal. All of this adds up to a stable mic that won’t move around on your desk during use, and is not very susceptible to small vibrations. There are three knobs on the front that control the mic gain, the 1/4” input gain, and the headphone monitoring volume. There is a momentary mute button above these buttons that temporarily cuts out your sound if you feel a cough coming on.

The rear of the mic sports a 1/4” input for a line level source or guitar, as well as a headphone output for monitoring both your computer USB audio feed and the mic inputs. The USB port is located on the bottom of the mic. The included cable fits perfectly, but I found myself swapping it out for a right-angle USB cable to provide a little more clearance for easy adjustment.

What’s Inside That Counts

The G Track Pro has a selectable pickup pattern switch that allows you to switch between a figure 8 pattern, a cardioid pattern, and an omnidirectional pattern. There is a second switch which allows you to record your 2 tracks discretely or mix them together. The ability to record a guitar directly while laying down a vocal is a welcome one, and it’s nice that you can access these tracks independently. It definitely makes the G Track Pro a little more appealing as a ‘run and gun’ mic/audio interface. 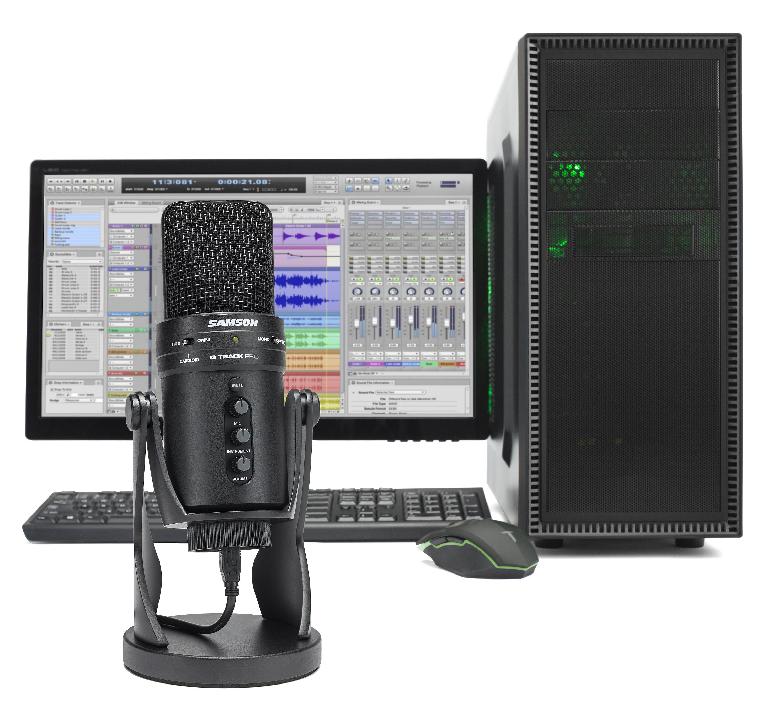 The budget-level USB condenser mic market is getting a little saturated, and with Samson already having an entry in that marketplace with the C01U Pro, I was interested to see what kind of sound the G Track Pro would provide and if it was that different from the C01U.

I’m happy to report the G Track Pro held up nicely against its brethren. I was actually quite pleased to find an extremely low noise floor, and a mic that picked up a fairly balanced sound from a good distance. I recorded a sample voice over clip from about 3-4 feet away from the mic and here’s the result:

That’s a pretty decent sound and very little noise for a USB condenser that sells for well under $200. This mic would work perfectly in a podcasting situation or live streaming over Twitch and the like. You don’t have to have it ‘right up against your mouth’ in order to get sound that is remarkably better than your computer’s built-in mic.

There’s a lot to like about the G Track Pro. It’s a little light on the high/low end extremes, but that’s to be expected for its price class. At $150, this mic is incredible value and what you get in the box will do a lot for you. Streamers, podcasters, and gamers take note - this is the one to get.

Cons: I would have preferred a right-angle USB cable for a little more clearance on the bottom.

Learn more about recording in the Ask.Audio Academy: https://ask.audio/academy?nleloc=new-releases
Related