For this review, we’ll be looking at a just-discontinued piece of futuristic tech—but that’s OK, because it’s been replaced by something very, very similar. The Samsung T1 external SSD is the product we’re looking at, and it’s been replaced by the almost-identical T3, which has a different kind of USB connection. Both drives do much the same job, and if you need to shift large amounts of data around quickly, you’ll want one, so look out. Let’s go through the usual five points, which this time around are:

It’s smaller than its own short cable, for goodness’ sake

It’s really, really small. Smaller than a credit card in width and height, and as deep as a normal USB plug, this drive is ridiculously small. While I’m sure that we’ll see this amount of storage creep down in physical size soon enough, large capacity SD cards can’t compete on speed just yet. This isn’t small enough to lose, or leave behind in a client’s computer, but it’s definitely something that fits in almost any pocket, and would be great as a travel drive. It’s also… 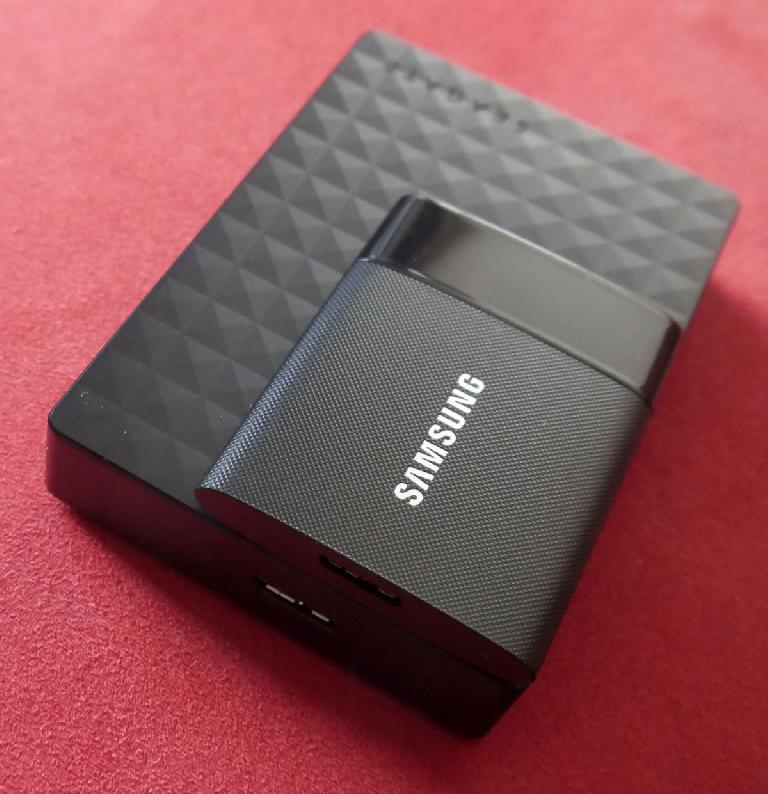 26g vs 242g, not much of a contest—and they’re both portable drives

So light. Just 26g (0.92oz). That’s light enough to hang in the air from its own USB cable, and not strain the port. Light enough to make you forget it’s in your pocket. For comparison, a regular 2.5” portable spinning disk I use weighs in at 242g, and others are similar. If you’re constantly running out of space on your internal laptop SSD, this could be a great expansion drive, a new home for overgrown Photos, iTunes or iMovie libraries that’s light enough to carry all the time. 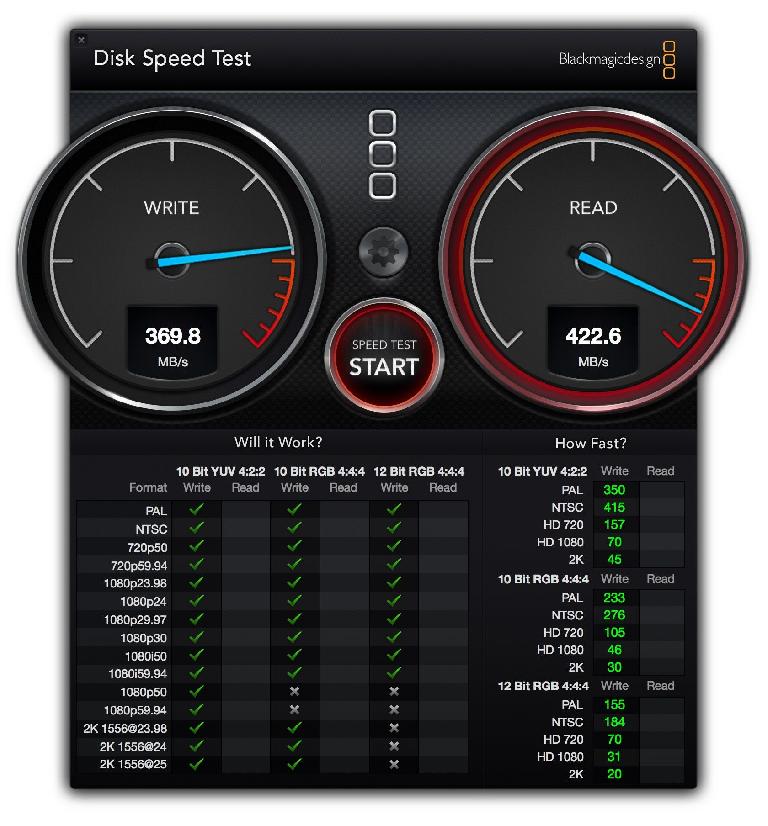 Around 4x the speed of my portable spinning disks, and nearly keeping up with my RAID

Oh yes, it’s very fast. A 47GB FCP X library copied to my T1 in 1min 57sec, but the same library’s journey to a regular portable 2.5” drive took 8min 8sec. That’s a 4x speed boost that the benchmarks confirm: the Blackmagic Speed Test pegs the T1 at around 370MB/s for read and 420MB/s for write. While a MacBook’s internal SSD goes even faster than that, it’s 3–4x faster than a regular spinning disk, and competitive with a half-full RAID. Absolutely, it doesn’t have the capacity of my desktop-based RAID, but I don’t need that when I’m offloading a job in the field—just enough for one job at a time. It’s also suitable for quickly transporting an entire FCP X library for an onsite edit, and it’s refreshing to have a second external that can (nearly) keep up with my RAID. 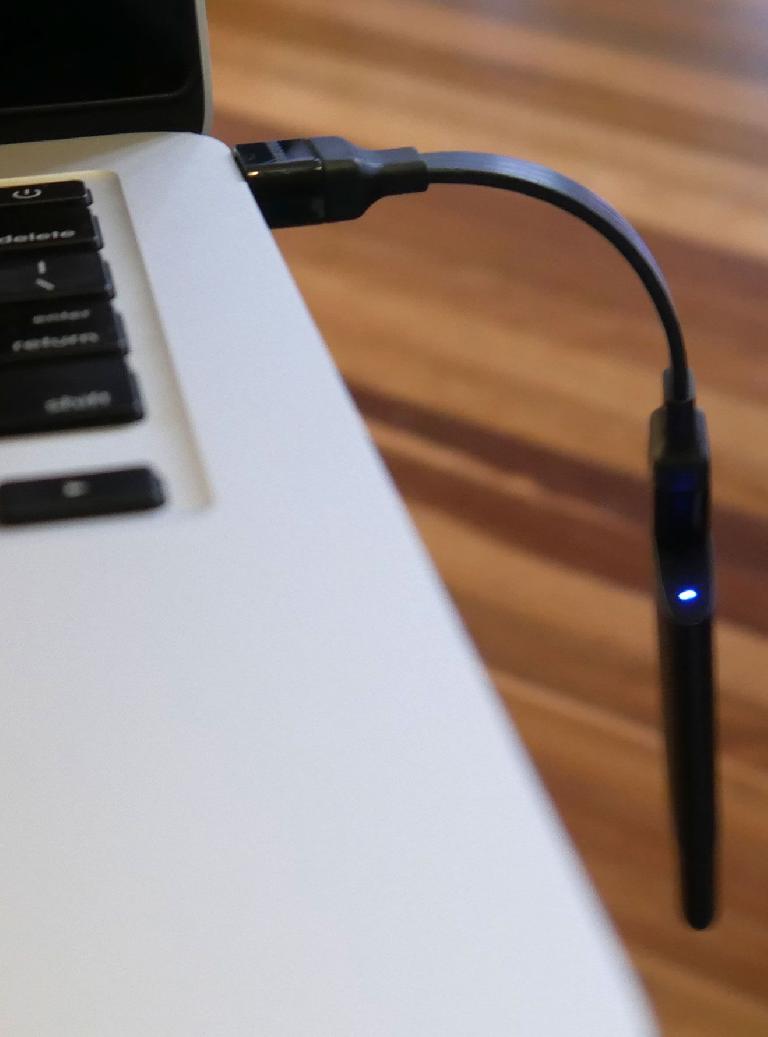 It stays plugged in, and doesn’t disconnect easily

I’ve only had this for a few days, so time will clearly tell if it remains good. Still, it comes with a 3-year warranty and the micro-USB port on the back feels really stable. I’ve used some drives that disconnect when breathed upon, and this one hasn’t yet. The lack of moving parts means that I can shift my computer around while it’s actively in use, even while editing or exporting. I’ve seen spinning disks fall while in use with years of memories lost, and solid state can’t arrive soon enough. 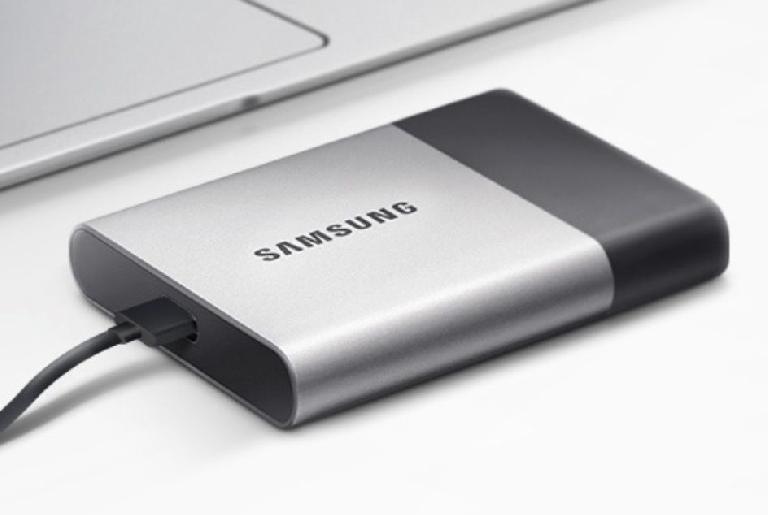 This is the newer model; a tiny bit larger and with a new port, but very similar innards

Why buy the older T1? Because it was cheaper, at least at the time, and because the newer T3 didn’t bring anything new to the table. The T3 moves from a micro-USB to a new-fangled USB-C port, which is commendable, but doesn’t increase speed. (While the new port’s reversability is great, I generally leave the USB cable connected to the T1, and I’ll be able to buy a USB-C to micro-USB cable when that port probably shows up on my next Mac.) The drives are very similar in speed and utility, so pick up a T3 if you can’t find a T1.

This isn’t the OS-native dialog I was hoping for

A brief additional word of caution

While I do recommend this drive, just one caution: the setup process isn’t obvious.  When you first plug the drive in, you aren’t presented with usable space straight away. You’ll need to install a driver, then unplug and replug the drive before it offers to erase itself and actually show you the 500GB you paid for. It’s formatted as ExFAT, so you’ll likely want to use Disk Utility to erase one more time and pick HFS+ (Journaled) instead. The drive is then usable just like any other external, even on machines without the driver. Odd, but just a minor speed bump, and one that may not be an issue on the newer T3 drive. 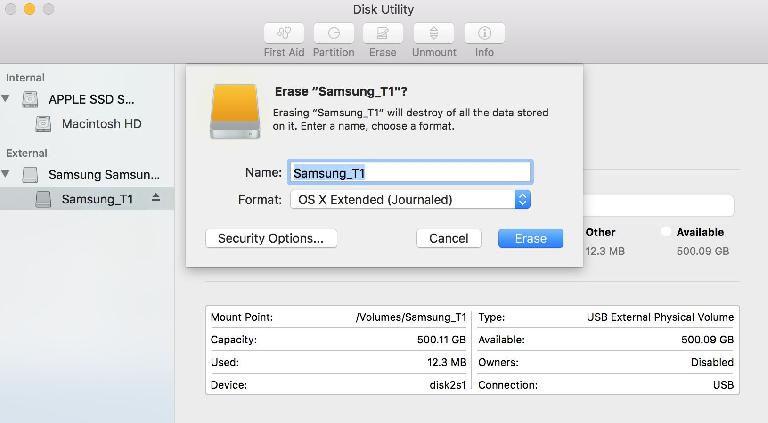 Install, unplug, replug, erase, and all is well

It’s very fast and portable, it’s far more resilient to damage than a spinning disk, and it’s affordable. While you’ll probably want to use large spinning disks for storing huge amounts of data, this is perfect for on-the-go storage of videos and photos. Grab one. It’s the future.

Dream It. Do It.
Do you want to learn Mountain Lion?
Yes, I want to learn!
No Thanks, I just want to read the article.
Feedback
How are we doing?
We'd love your thoughts, feedback and questions regarding our new site. All feedback is appreciated!
We do not respond to this form! If you need support, please visit our support page.
Thank you for your input!
Your message has been successfully sent
Course Advisor
Don't Know Where To Start?
Ask A Course Advisor