All Articles Review
Review: Strymon Magneto
Jade Wii on Thu, May 24th 1 comments
This powerful tape delay and looper is so much more than just an effect. As Jade Wii discovers, it can be played like an instrument...

If any of you remember back in the 2016 NAMM trade show, Strymon gave a sneak peak of a Eurorack prototype device under the code name “Generalissimo”. In later interviews with Strymon they confirmed that Generalissimo was indeed the beginning of Magneto. Most of the controls are identical, but they added new sound sculpting features, a whole lot more CV control, a sound on sound looper, sampling capabilities and finished it off with a beautiful black panel and a powerful name; Magneto.

Although not widely accepted by guitar players, people have been using guitar pedals with synthesizers, vocals and drum machines for decades. Eurorack users had no reason to stay behind. It’s not uncommon to see a Strymon BigSky or Timeline at the end of a Modular chain, so why not take part in this growing community that loves to mangle and tangle their sounds with audio effects? With the announcement of Magneto earlier this year at the 2018 NAMM trade show, the guitar floor at the Anaheim Convention Center soon found itself flooded with synth lovers, myself included. We all waited patiently for a chance to try out Magneto, or better yet have one of the Strymon experts show us what this big and intimidating module was capable of. 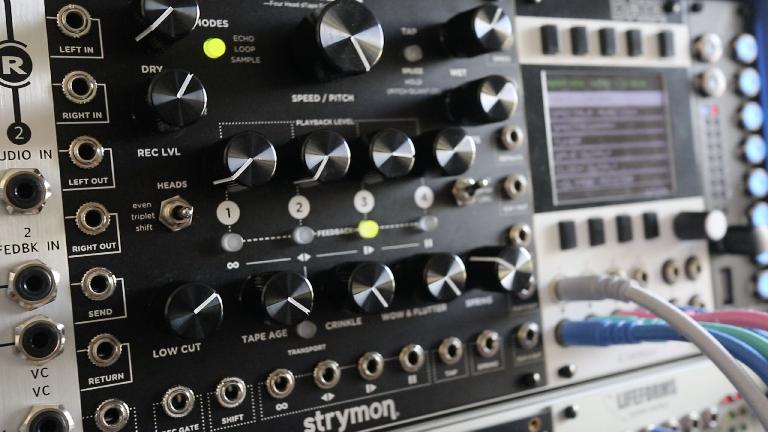 As mentioned before, Strymon took plenty of feedback from their original prototype, the biggest addition being the Modes button which allows us to transform Magneto from a four head digital tape delay (green LED) to a sound on sound looper (amber LED) and a vari-speed phrase sampler (red LED). Although you could place Magneto at the end of your sound chain, since it is a stereo device I prefer to send two different sound sources into each input and mangle from there so my drums aren’t drowned. 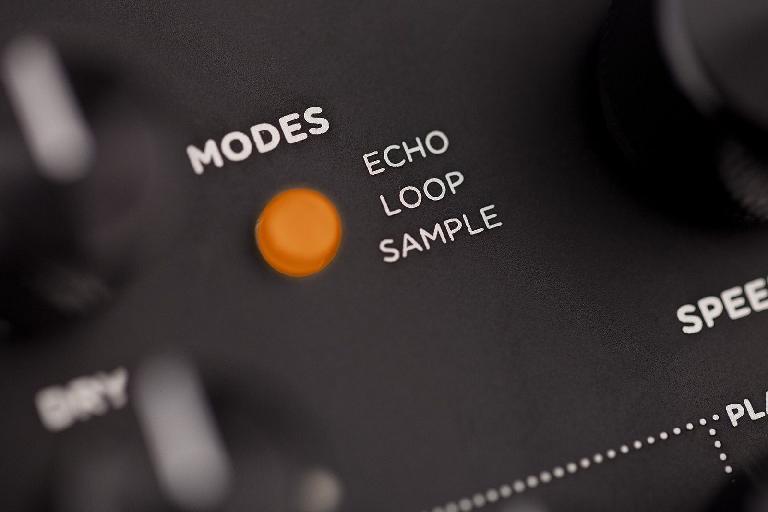 There’s plenty of CV control on this thing, but one of my favorite features are the Phase Aligned Clock Multiplier/Dividers. Each output can easily be used to patch Magneto into itself with different values in Triplet and Shift head spacing. By self patching we can create chaotic changes all controlled by Magneto itself, making this a great tool for even a smaller system where real estate can be an issue, Magneto can have multiple uses.

The giant knob in the middle affects our sound in the most dramatic ways depending on the Mode we're in. When in Echo mode it affects our delay range, when in Looper mode it controls the maximum time between splice in and splice out, and when in Sample mode it controls our sample start and end points.

If you’ve ever owned any Strymon product, after a while it’s easy to identify when they’re being used in a mix. This isn’t a bad thing - Strymon pedals just have a very clean and warm characteristic to them. Magneto doesn’t fall far from the tree in the warmness department, but it can also get very dark and distorted at the right settings. By turning up the REC LVL knob a hot signal is sent to the record head which creates a saturation effect that is widely affected by our other knob positions. Twist and turn until you find yourself falling into a dark abyss of no return, but if things do get too chaotic even for your liking simply turn the REC LVL knob back down and soak in the warm sea of luscious delays. 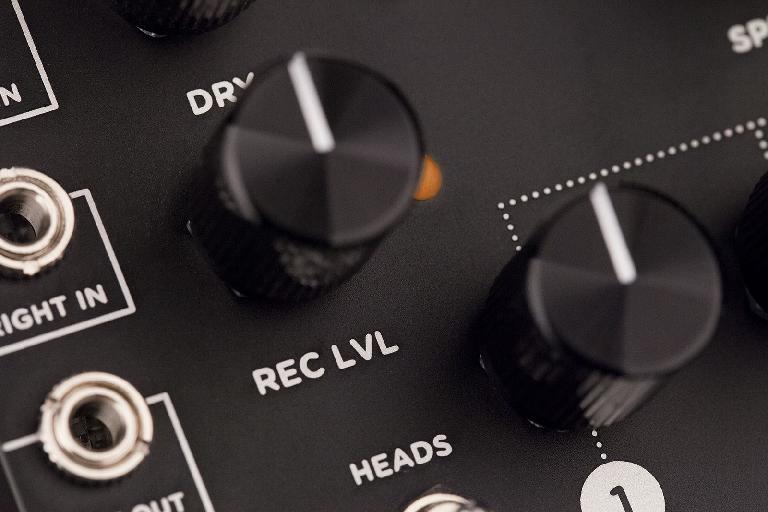 Wait, I thought this was a delay? What more could we ask for but the addition of a built in spring reverb, and Strymon has delivered. Normally to achieve any type of dynamic stereo ambience with a delay pedal we would have to sacrifice by turning down our dry signal and drenching our mix in a wet one, but not having to choose between the two is a thing of beauty. The spring reverb on Magneto has a very unique characteristic that is gentle even at its lowest setting, and thanks to its sophisticated gain structure when turned all the way up it still holds its own in our mix without drowning our incoming signals. 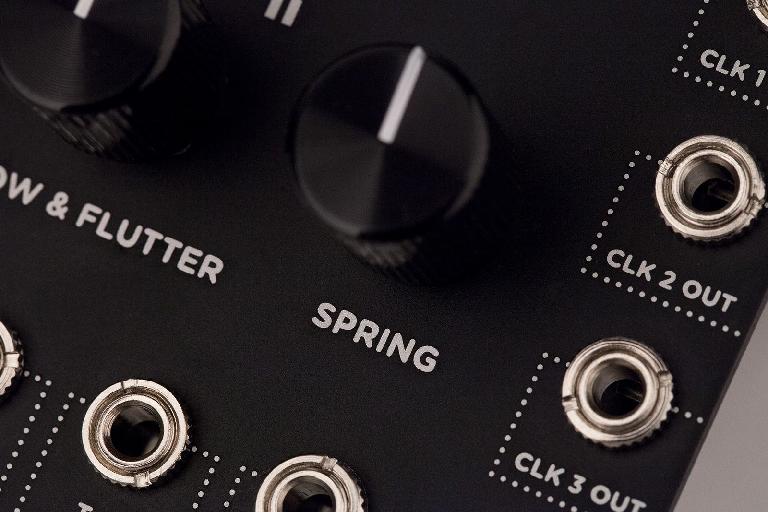 When The Sequence Stops

One of the most beautiful things I’ve experienced with Magneto is when the sequence has concluded. One would expect a few remaining delays here and there, but Magneto takes it to a whole different level, to infinity and beyond. With the help of our transport controls Magneto can mangle and mash our last delay cycle or loop length. By activating the Infinite control Magneto will continue to play while you layer other sounds and mess with other modules. 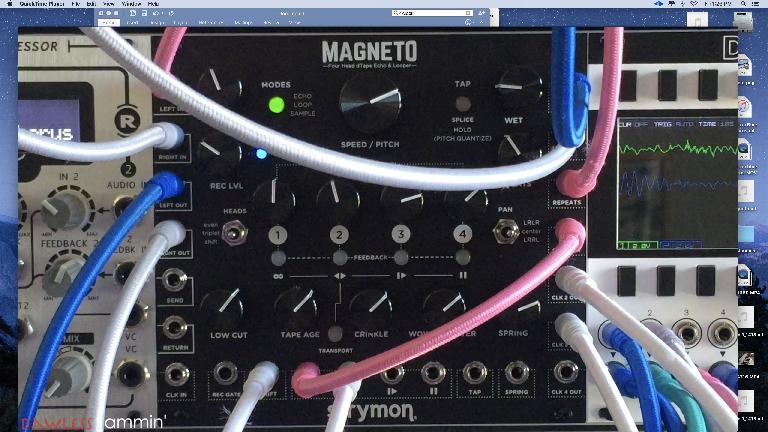 Magneto definitely requires a read of the manual more than once. Yes, it’s an easy module to get a good sound out of, but it’s so feature packed that some of its modes require certain settings to work as intended, one of them being that Tape Head Four must be On in order for the sound-on-sound looper to work, so keep that in mind of you think you’re doing something wrong, because you probably are. 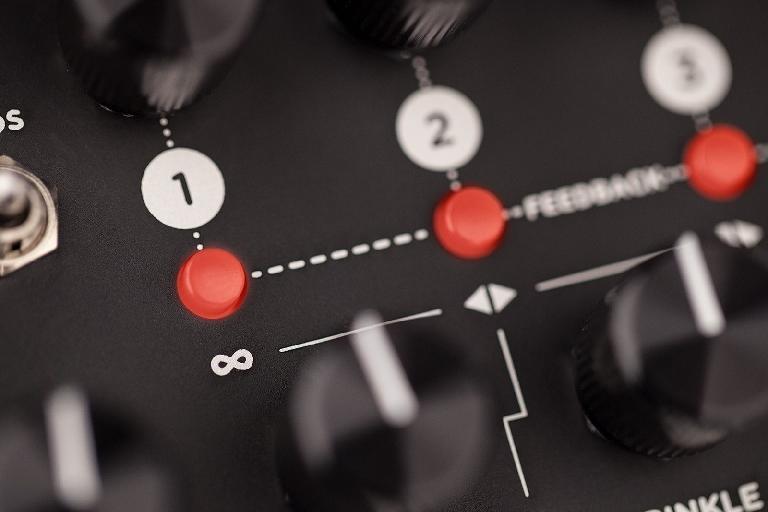 Wait, I can use Magneto without a sound source? Get outta here. By sending 1V/oct CV into Magneto’s Pitch/Speed input we can play Magneto’s Chaotic Oscillator with an external device, be it a keyboard or sequencer. Having 15 scales to choose from even allow us to play the Oscillator without any external control, simply move the Speed/Shift knob to scroll through the notes, keep on mangling with other settings and get lost in the ambience.

The Strymon Magneto Four Head dTape Echo & Looper Eurorack module has been the subject of interest by many musicians in the modular community since its release, myself included. Audio effects have the ability to take a simple sequence and transform it into a completely different piece. With Strymon’s popularity there was zero doubt that this module would live up to its expectations. Every day I discover something new with Magneto and it's made a new home for itself in my Eurorack case.

Price: $599
Pros:  Unique Sound. Feature Packed. Sonically Capable of creation and destruction.
Cons: A bit on the pricey side. Might be a bit large for some at 28HP.
Web: https://www.strymon.net/products/magneto
Related

Jade Wii
JAde Wii is a self-taught keyboardist, guitarist, cellist, and Dawless Jammer. JAde has been creating music for over 10 years, but only recently has she become a synth enthusiast, and what a journey it has been for her. She enjoys to explore the realm of composition without a Digital Audio Workstation, which is becoming more and more popular everyday. She also embraces the spontaneity of recording in one take, and sequencing her instruments in real time. As a full-time college student she uses her spare time to compose and record electronic music, drawing inspiration from the instruments around her.
Related Videos
Comments (1)