Teenage Engineering has made a name for itself producing the unique, credit card-sized Pocket Operator synth range as well as the mighty OP-1 and even a wireless speaker system. To the already impressive lineup of Pocket Operators it now adds the PO-32 Tonic, a drum synthesizer and sequencer that differs from its existing rhythmic offerings in a number of ways. It does share a form factor and interface style with its other PO siblings and many of its core concepts are the same, so you can check out our detailed review of some of the other models here.

So where does the PO-32 fit in to the family? At its heart, it retains the immediacy and earthy sound character of other POs. The grid of buttons is how you interact with it and each one has a couple of different functions based on what modifier buttons you press. So the grid doubles up as a sound selector, pattern selector and a sequencer. Select a sound by using the tiny gold icons to tell which is which and then punch in a pattern for that part, and repeat for any of the 16 parts.

Select a pattern and choose a BPM, then add accents to notes and swing to patterns. The two dials at the top right hand corner of the grid vary their functionality based on what mode or section you are in, and can be used for setting tempo and also automating sound parameter changes over time while in record mode. There’s a choice of 16 different effects that can be punched in by pressing the FX button and then a numbered button, and these include cool things like morphing, stutter, pitch bending, reverse, squash and more. They’re not labelled on the hardware since space is so limited but they are in the manual and you’ll soon become familiar with them. You can record effect punch-ins as part of a pattern, which makes everything even more flexible. Performing live with the PO-32 and punching effects in and out on the fly is a dimension you might not have expected in such a tiny unit, but it’s actually very easy to do.

Sonically the PO-32 packs a far bigger punch than it has any right to, with its hard-edged sounds practically blasting out of the speakers or headphones when you hook it up and raise the volume (another shift+numerical button process). Like other POs it has a built-in speaker that can go surprisingly loud and it's powered by 2xAAA batteries, with a stand mount on the rear. It’s sturdy, but anyone planning to throw it in and out of bags for any length of time might want to consider the optional case to protect it.

There are audio in and out mini jack ports on each side which can be used either for headphones or linking to an amplifier, and also enable sync either to other PO devices for creating a chain, or to devices like volca, iPhone or a slave device. These can be used to transfer sound and pattern data from PO-32 to other PO units by connecting an optional cable, but there’s a new method on this hardware that isn’t present on the others.

At the top of the front panel is a tiny microphone and by following a series of key combinations you can play a sound out of one unit’s speaker into the PO-32’s mic and have it copy that sound and also “back up” the unit’s sounds by recording them out to another device, and back in again later if you want to restore them. This also extends to the other major new feature, which is audio transfer from Microtonic. 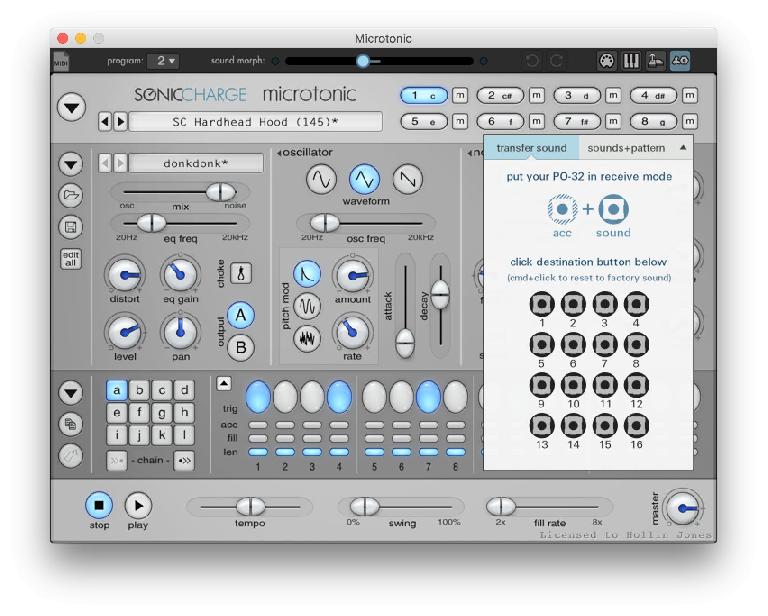 Microtonic is a popular standalone and plug-in drum synthesizer and Teenage Engineering has teamed up with the developer to provide this new functionality that effectively lets you swap sounds in and out of the PO-32 and thus greatly expand its sonic palette – something that was not available previously. You’ll need an authorized and up-to-date version of MicroTonic (the demo version doesn’t allow communication with the PO-32) and at present you will need to buy the plug-in separately, there’s no bundle deal.

When you do have the required components, the system works as advertised: select a slot in Microtonic and tweak your sound, then put PO-32 into receive mode and transfer the sound either over a cable or via the speaker and mic. The speaker/mic option is interesting because it must somehow sample or otherwise read the waveform of the sound, then convert that to something that the synth engine can read. You might assume micro USB would have been an easier way to go, but the company takes a different approach and it worked just fine in my tests.

PO-32 costs slightly more than some of the other POs but it does have greater functionality, namely the mic and sound transfer tools which arguably make it much more flexible. Although it shares a common workflow and core feature set with its siblings, it is, essentially, expandable where they are not. For new users the Pocket Operators initially take an hour or so to figure out, but the guides on the website are among the clearest and most helpful I’ve seen, so that speeds up the learning process a great deal.

Sonically, PO-32’s onboard sounds are cool: heavy and punchy with a distinct chiptune character to them. Being able to design new sounds with Microtonic and fire them across does really open up the possibilities here, and as such it’s certainly the most flexible Pocket Operator to date. You can still sync it with other models in the series too of course, and it retains the fun, immediacy and unique sound and workflow of its brethren. At the price it’s both a cool toy and something rather more serious if you choose to use its sounds for production or live performance, which you almost certainly will.

Cons: No bundle deal with Microtonic at present. Adding a case still a good idea if you plan to carry it around.