All Articles Review
Review: Turn Your Table into a MIDI Instrument with Pulse Controller
Toby Pitman on Sun, August 25th 4 comments
Language
So, you've got a drum pattern in your head that you want to get into your DAW, but are lacking a drum pad / MIDI keyboard. Enter Pulse controller which Toby Pitman discovers is a little known gem.

A little while ago a composer friend posted a link to a really cool looking device. That device was the Pulse Controller. It essentially allows you to turn any surface into a playable MIDI controller just by hitting it.

Now the idea behind this isn't new as piezo pickups have allowed drummers to trigger MIDI for years, but this requires specialist converters or drum '˜brains' to do the job of converting the analog signal to MIDI.

Pulse Controller however takes this idea and radically simplifies it making it accessible to anybody with an audio input on their computer by way of some clever software. The reason I found this exciting is that, although I might not be able to play drums, I can rip it up on a table top!! So I ordered one...

What do you get?

Pulse Controller includes the piezo mic (I got the clip-on version, but there's a suction cup one too), a 1/4' to 1/8' stereo jack converter which allows you to plug the pickup straight into your Mac audio input, and the software. 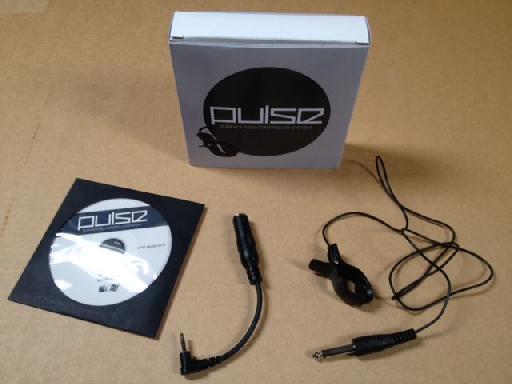 Just plug the pickup into your computer or your audio interface and attach the other end to your desk or any surface you like for that matter (the clip can accommodate a thickness of about 3 cm) and you're good to go.

The Pulse Control software is where the magic happens. It's compatible with both Mac and PC. And after installing all you need to do is set up some parameters.

The first is the audio input settings. This is where you choose your input and adjust the gain and sensitivity. There's a meter to see the incoming signal. 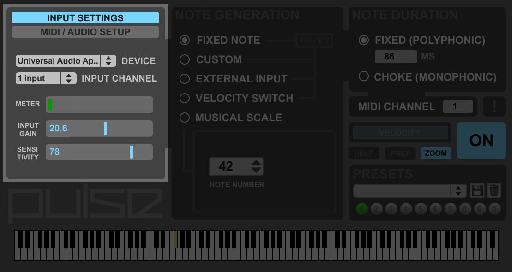 Set your audio driver and buffer size. Lower buffers will reduce latency. Then set an output for the MIDI signal. Selecting '˜from Pulse Controller 1' is fine for internal MIDI stuff, but you can route this to external MIDI ports too. 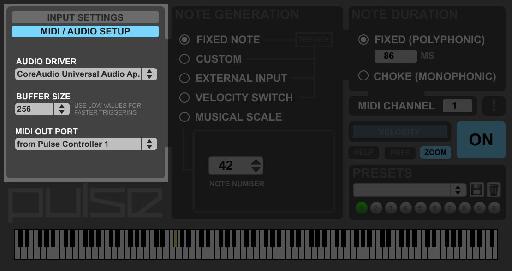 You can choose from five modes that determine how the Pulse Controller will output MIDI. The first is Fixed Note. This simply plays the desired note that you set in the Note Number selector. You can also define how long you want the note to be by playing with the Note Duration parameters. You can also set your MIDI channel. Here's an example triggering a snare. 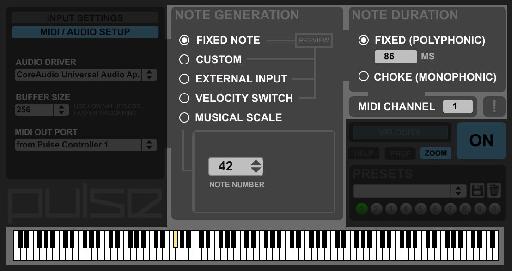 The next one is Custom. Just input the notes you'd like on the keyboard and then use the Arpeggiator to cycle through them. You'll find all the usual Arpeggiator modes. This allows you to play melodic content or randomize different articulations of a drum which is very interesting. In this mode you're tied to one set of notes, although you can feed the software from a sequencer using the External Input mode. 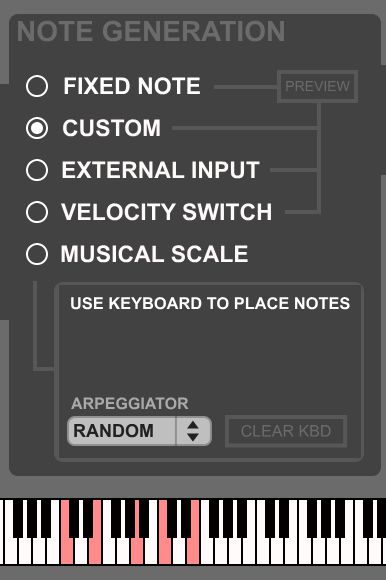 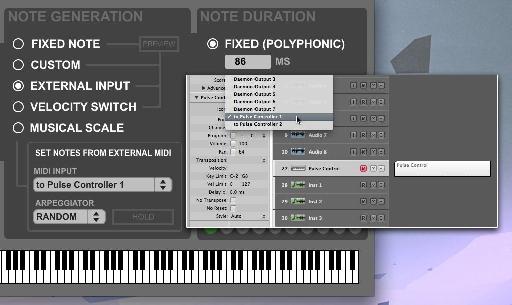 Here's how that sounds.

(All the notes are triggered by me hitting my desk. It's so fun!!)

Next up is Velocity Switch. With this you can redirect the MIDI to up to three different note numbers based on the velocity of the hit. Currently, the output velocity is fixed although I hope that may change in the future. 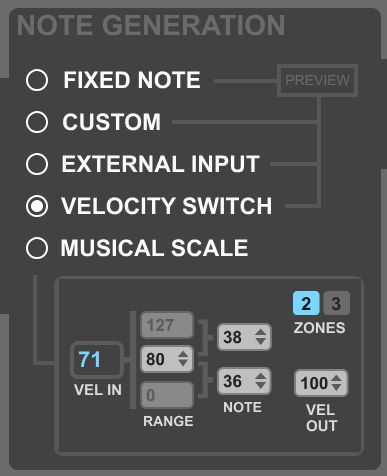 Lastly, we have the Musical Scale mode. This allows you to choose from 21 scales with various playback variations and you get control over the Key and key range etc. 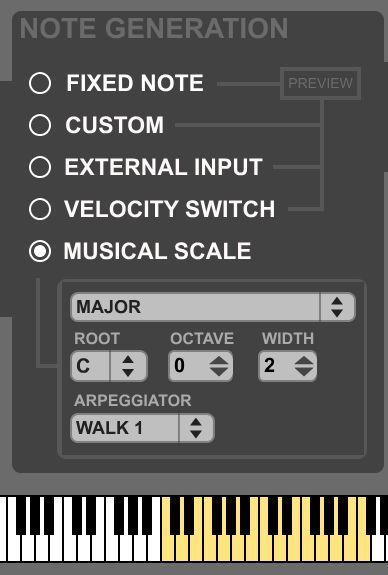 You can also save presets for different setups which is handy.

Considering this is based on such a simple idea, Pulse controller has got to be the best thing I've bought in ages. For playing percussion samples, it's a lot more natural than a keyboard. Even more expressive than playing drum pads on something like Maschine. The melodic side is really inspiring for creating new ideas especially the External Input. Sure there are limitations, but it's such good fun you'll forget about that pretty fast!

Pulse Controller is a great little product and is constantly plugged in now. The Clip version was $56 and worth every bit of it. Simply brilliant!!

Toby Pitman
For the past 20 years Toby has worked as a professional guitarist, programmer and producer. Clients include Sir Paul McCartney, George Michael, Shirley Bassey, Yusuf Islam, Giles Martin as well as the London 2012 Olympic Ceremonies. He has also worked extensively in TV, Advertising and Film. As well as composing himself he has also worked alongside many composers like David Arnold, Clint Mansell and Simon Franglen on many major film releases. An expert in synthesis and sound design Toby has also lectured for Apple on their Logic Pro music software which he has used since its days on the Atari. He has also worked as an educator for the International Guitar Foundation and the Brighton Institute of Modern Music teaching guitar. In his spare time (of which there is very little) he moonlights as a motion graphics artist specialising in Cinema 4D and After Effects.
Related Videos
Comments (4)