First announced at NAMM 2020, the M-1610 Pro combines the outstanding performance of RME's M-32 Pro AD and DA converters into a single 1U unit.

Additional flexibility is provided by the integrated AVB interface, offering two redundant Gigabit Ethernet ports for synchronised and prioritised transmission of up to 8 AVB streams (up to 16 channels per stream), with a total of 128 channels.

Finally, redundant power supplies offer automatic failsafe for live and 'mission critical' applications, making the M-1610 Pro one of the most versatile and powerful professional audio converters on the market. 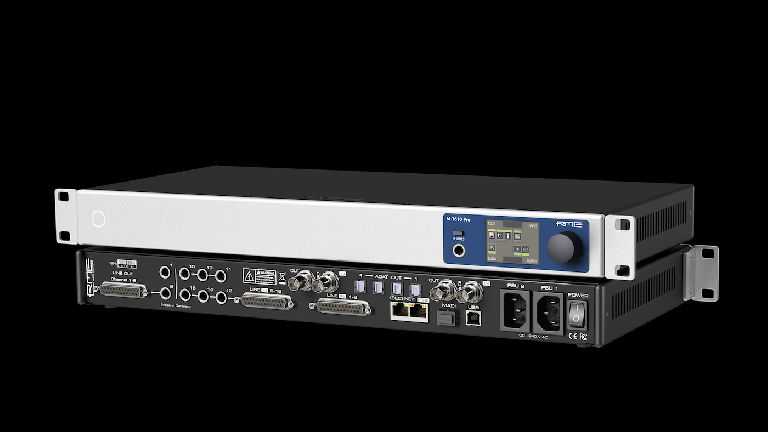 Like all new RME devices, the M-1610 Pro features SteadyClock FS, RME's latest digital clocking and jitter rejection technology, which can be used as a clock master in any digital audio system.

Originally developed for the award-winning ADI-2 Series of converters, RME's femtosecond clock is accurate to 10-15 (or one quadrillionth) of a second, reducing intrinsic jitter (when converting from and to analogue, over all digital formats) to a new all-time low.

The M-1610 Pro's front panels houses controls for all of the device's functionality via a large pushable encoder, with a TFT display for selecting controls and settings, including routing and the saving and loading of presets. A dedicated headphone button allows for instant monitoring of any incoming signal.

In addition to the front panel, the RME M-1610 Pro is also controllable via the browser-based web remote.

With a flexible and user-friendly interface, the web remote provides extended control of the M-1610 Pro's many features such as adjusting input reference levels; channel routing for all analogue and digital I/O; changing Word Clock and sample rate settings; and saving / recalling presets.

Connection to the web remote can be made via AVB, or via USB when not using the M-1610 Pro as part of an AVB network.

From the company's beginnings in manufacturing cutting-edge PCI and Firewire technologies, to developing industry-leading USB and MADI solutions, RME now turns its attention to setting new standards in the field of AVB, offering professional audio users a selection of ultra-reliable and future-proof devices designed for the next decade.

Dream It. Do It.
Do you want to learn Advanced Metering?
Yes, I want to learn!
No Thanks, I just want to read the article.
Feedback
How are we doing?
We'd love your thoughts, feedback and questions regarding our new site. All feedback is appreciated!
We do not respond to this form! If you need support, please visit our support page.
Thank you for your input!
Your message has been successfully sent
Course Advisor
Don't Know Where To Start?
Ask A Course Advisor