All Articles Review
Video Review: Moog Subharmonicon
Rounik Sethi on Wed, May 23rd 0 comments
Warning: Watching this video review will probably make you want one of these new Moog synths which you currently won't be able to buy as it's not available. Watch and lust after it at your peril.

Good friend of Ask.Audio, Loopop, was at Moogfest 2018 a few days ago and joined the special engineers workshop where he built the new, and as-yet unreleased Moog Subharmonicon analog synthesizer. Read his thoughts below and watch the video which includes extensive sound demos and an interview with one of the Moog engineers.

Be warned. You might get some serious GAS (gear acquisition syndrome) watching this video:

The Subharmonicon is a lovely, interesting and different synth from Moog. Only around 100 were hand soldered and built at Moogfest's 2018 Engineering Workshop, and there's no information currently about whether it will be released commercially.

Even though availability is scarce, I decided to put together a review of this instrument, because the way it works is such a breath of fresh air when it comes to sound generation and sequencing. Also, one would hope that Moog will eventually mass produce the Subharmonicon, as they did for most, but not all past Engineer Workshop projects, like the DFAM and Werkstatt.

This review includes an interview with Steve Dunnington from Moog, who led the Subharmonicon project. Steve talks about the vintage synthesizers (Trautonium and Rhythmicon) and composition theory (Schillinger system) that inspired this synth.

So what makes the Subharmonicon special? Two main things. First, it has six (!) oscillators. These are sawtooth oscillators, a tribute to the original Trautonium. There are two main oscillators and each has two sawtooth sub oscillators, which can follow its main frequency at subharmonic intervals – divisions of anywhere between 1 and 15. 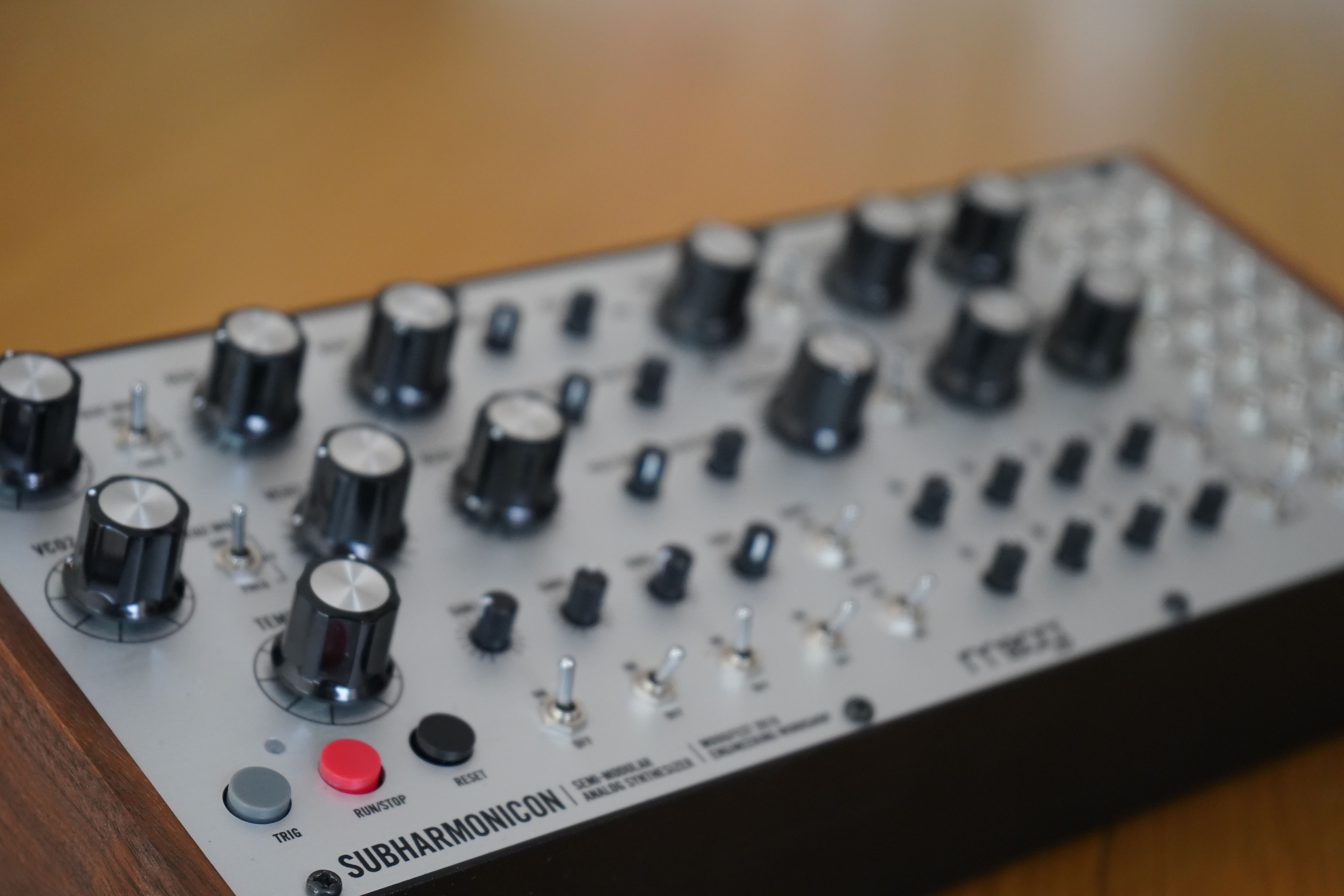 The second thing that makes it special is its sequencers. Each of the two oscillator groups has a sequencer dedicated to it. Initially, it may seem these sequencers are limited because they only have 4 steps each. However, the Subharmonicon sequencers aren't designed to just be played in a regular step-by-step fashion. Rather, their cadence is powered by up to 4 tempo sub-dividers, also based on the principle of subharmonics. This rhythmic core produces sequences far longer than 4 steps, repeating and skipping notes in very interesting and surprising ways. Each of the two sequencers can be configured to control either the pitch of its main VCO (and sub oscillators) or just modulate the subharmonic divisions – thus generating different chords on a per step basis.

In addition to new elements above the Subharmonicon contains controls we're used to seeing in Mother-32 and DFAM: a resonant low pass filter, AD envelopes for the VCA and filter, and a 32-jack patch bay with access to many of the internal controls.

Available: Currently was only available via the DIY workshop at Moogfest 2018