All Articles MIDI
What To Consider When Choosing Your Next MIDI Keyboard Controller
Joe Albano on Mon, October 21st 0 comments
MIDI controller keyboards come in all shapes, sizes and configurations. Joe Albano explains your options, whatever your keyboard needs may be.

When it comes time to select a MIDI keyboard controller, there is a wide array available, ranging from small  portable models with mini-keys to full-size weighted piano keyboards, with everything from basic wheels and pedals to full-blown panels of faders, pads, and other controllers. There are a lot of options for a newly-minted music producer to sort through—with that in mind here’s a brief rundown of some of the considerations that may come into play when choosing a MIDI controller.

In the old days, MIDI controllers were universally equipped with MIDI connections on then-standard 5-pin DIN jacks—basic controllers with no onboard sounds only needed a MIDI Out, while controllers that also included their own sound sets would, of course, also incorporate MIDI In to access those sounds. For DAW applications the controller’s MIDI Out needed to be plugged into a MIDI interface connected to the computer.

While many modern controllers still include a DIN MIDI jack for full compatibility, nowadays USB is the most common connection for MIDI controllers, allowing for direct connection to not only computer-based DAWs, but also to music apps running on tablets and smartphones. Some of the smaller portable controllers may also incorporate the option for a wireless connection—if a controller will be used on the road frequently, this could be a selling point.

There are two ways to express size when it comes to keyboards: the size of the keys themselves, and the key range—the number of octaves. Controllers have either standard piano-sized keys, or smaller mini-keys. Obviously for studio use full-size keys would be the norm, but for portable applications the use of mini-keys can make it easier to travel with a controller. They’d undoubtedly require a little adjustment for a player used to a full-sized keyboard, but the convenience factor for musicians on the road may override the needed accommodation.

There are several common options when it comes to keyboard range. 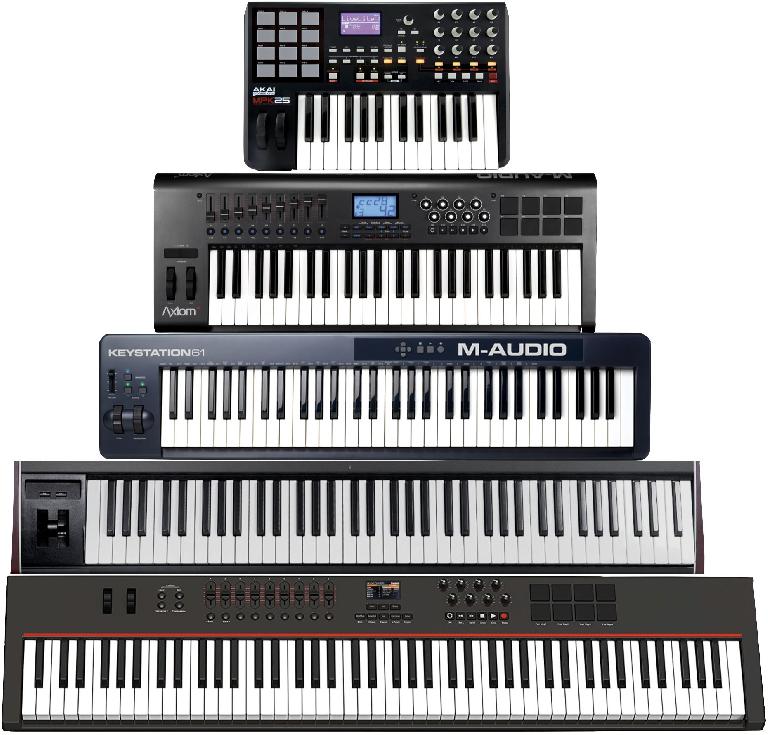 For serious studio use, a full 7+octave 88-note piano range would be the best option. This not only provides the appropriate range for piano parts, but many sound libraries—especially orchestral libraries—feature patches for instruments that don’t span that full range but do utilize the unused keys at the bottom to select different instrument articulations. A good example would be a string patch that includes alternate versions with different playing techniques—legato, pizzicato, etc—that can be selected on-the-fly by tapping keys in the lowest octave. It’s a common application, and those using shorter keyboards will miss out on this functionality.

As any gigging keyboardist will tell you, an 88-note keyboard will often not fit easily (if at all) in a typical car—slightly shorter 76-note (E-G) or 73-note (E-E) models provide a suitably wide range while offering easier portability. Probably the most common keyboard range is the standard 5-octave 61-note organ-length keyboard. This is long enough for most two-hand playing, and even split-keyboard applications—one instrument on the lower keys and another on the upper keys. 4-octave models may also be suitable, with an even smaller footprint.

For simpler parts, short 3- or 2-octave keyboards are useful when most parts are likely to be played one-handed, within a limited range, like basslines or synth solos. Combined with mini-keys, this can provide a highly portable option that can be packed into a small carrying case along with a small laptop or tablet, for the greatest convenience on the road.

The physical response of the keys can be a major factor in choosing a controller. Piano players who want to be able to translate all the subtlety of their performances will undoubtedly opt for a controller with a fully-weighted piano-style action. The best of these may incorporate an adapted version of a traditional escapement—the mechanism that provides the response and bounce that allows for the rapid and expressive playing possible on an acoustic instrument.

To save space—height, in particular—most weighted keyboards use a simpler mechanism, but one that provides a similar amount of resistance and bounce, suitable for playing both virtual pianos and other instruments that would be easier to play with a faster, easier response than that of a real piano—a “best of both worlds” kind of playability.

For players who are not used to the weight and resistance of a full piano action, semi-weighted keyboards may offer a bit less resistance—enough to provide subtle control over dynamics, but with a faster response more suitable to light playing. Some types of instruments—organ, for example—may be easier to play with lighter weighted keys—like those on the real thing—making fast runs and finger glissandi easier to perform. Unweighted keyboards are usually found on budget controllers—they’re nice and light, but might not offer sufficient control over dynamics when required, maxing out too easily.

Whatever the player’s preference, it’s important to lay hands on the keyboard—especially a weighted keyboard—with some familiar virtual instrument patches, to make sure it’ll provide the kind of expressive response and playing comfort needed for the most musical performances.

The MIDI response of a keyboard controller is another critical aspect, and one that’s often overlooked. The ability to perform dynamic, musically expressive parts is a function of the Velocity response of the particular keyboard in use. The 127 levels of MIDI Velocity correspond to how hard (technically how fast) each key is pushed down, and of course Velocity will typically control the dynamic response of the instrument sound. Acoustic sounds are normally programmed so that higher MIDI Velocities (harder playing) will result in greater loudness, brighter tone, and sharper attacks. More creative sounds and effects may be programmed to respond to different Velocity levels with other tonal variations or even special effects.

Using the example of a well-set-up virtual piano, the Velocity response of the keyboard itself will determine how hard the player has to play to generate louder/brighter/sharper notes. If the response is even throughout its range (0-127), then players should be able to generate natural musical dynamics with a very similar touch and technique as they would use on an acoustic instrument. 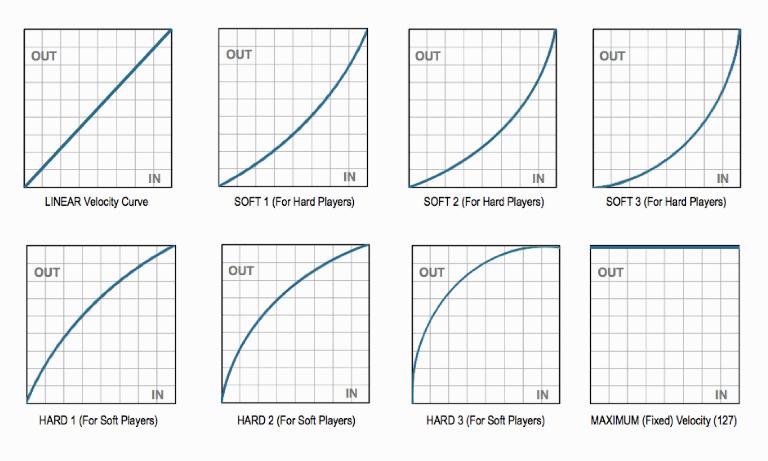 Additionally, the actual response is a function of both the Velocity curve and the physical weight and response of the keys themselves (the action). This is why it’s so important to audition a controller in person—with familiar sounds whenever possible—to make sure it will be suitable for the primary player. Studios that provide keyboard controllers for a variety of artists might want to include both a piano-weighted controller and a lighter keyboard, both with adjustable Velocity curves, to cover all the bases.

Some controllers may also incorporate Aftertouch (a.k.a. Pressure), where pressing down on held notes generates a stream of MIDI Aftertouch messages, allowing for continuous expression. This is usually only found in higher-end models, and the Aftertouch messages usually affect all held notes (Channel Pressure), though a very few keyboards may include per-key Aftertouch (Key Pressure) capability. If Aftertouch is important to a user—like if a preferred instrument library makes significant use of it for musical expression—then its inclusion may be a deciding factor.

Besides the keys, all but the smallest controllers also include additional controls that generate other MIDI messages, allowing for greater expression with most virtual instrument patches. Most commonly, there are at least two wheels and a pedal input. 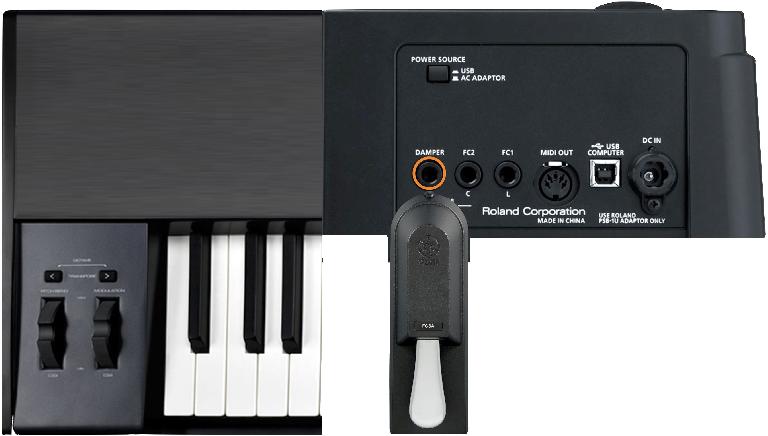 The pedal input is for a piano-style damper (a.k.a sustain) pedal, which will generate MIDI CC (Control Change) message #64, to sustain played notes—an important component of many keyboard performances. Larger controllers—especially piano-weighted controllers—will usually include a suitable pedal (or piano-style multi-pedal assembly), while smaller ones rely on the user to supply a standard external pedal. More full-featured controllers may include additional jacks for continuous MIDI expression (CC7, CC11) pedals.

The two wheels are normally a Pitchbend wheel and a Modulation wheel—these generate other MIDI messages. The Pitchbend wheel is spring-loaded, returning to the center position when released, and most virtual instrument sounds are programmed to bend the pitch up and down in response (typically two semitones each way by default), to allow for the emulation of musical performance techniques like string-bends or wind/brass instrument slides. The Modulation wheel—or Modwheel—outputs MIDI CC message #1. This can be programmed to have any number of effects. With appropriate acoustic instrument sounds, it’s typically set to dial up the intensity of an artificial vibrato or tremolo effect; more creative synth/effect patches may have their CC1 response set to create tonal variations or other special effects, like swoops or shakes.

The sustain pedal, pitchbend and modwheel controls are included on pretty much all general-purpose keyboard controllers, though dedicated virtual piano instruments that double as controllers sometimes omit the wheels. Many smaller controllers (and some larger ones as well) substitute touch-sensitive membranes for the more common mechanical wheels, and alternate controls like joysticks are occasionally used in place of wheels, but in any case the functionality for these standard controls should be the same, regardless of the physical design.

Besides the basic controls described above, many keyboards also include other performance controls. The most common of these are playable pads—for tapping out drum parts—and sliders and knobs, which can both provide mixing capabilities or offer realtime creative control of synth parameters for expressive sound design in performance. A common configuration might include 8 sliders and knobs—often the knobs are continuous “rotary encoders”, which can be more flexible for realtime use, adapting more easily to different values of different parameters when switching synth patches. 8 or 12 Velocity-sensitive pads might be included, which can be used not only for tapping out rhythmic parts, but also as switches for other effects and applications.

Some of the more capable controllers may provide software that automatically maps the various additional controls to parameters in particular (supported) DAWs, like onboard sliders and knobs to channel strip faders and pans, for example. Alternatively, there may be software that supports user setup of the controls—if customization is important then the availability of supporting software for the chosen platform/DAW may be a major consideration.

The latest developments in the MIDI spec allow for greater expressive control—like polyphonic expression—and some specialty controllers offer this kind of enhanced functionality; some of these are keyboard-like controllers that support the latest MIDI MPE performance capabilities.

There’s no room to get into all that here, but as these new capabilities become more widely known, keyboard controllers will no doubt adapt, with additional expression becoming available in even lower-end models. But for now there’s more than enough to think about when choosing a keyboard controller, to make sure you get the most suitable—and most musical—board for your specific needs.