All Articles News
When Technology Detracts From Music It's Painful, As This Video From CES 2016 Demonstrates
Rounik Sethi on Wed, January 6th 2 comments
Language
At Ask.Audio we embrace technology. But, there are times when tech and music seem at odds with each other. Like in this cringe worthy video performance from the end of the Intel CES 2016 Keynote.

I have the ultimate respect for A.R. Rahman. I also avoid being critical of new technology or musical performances that don’t pan out the way I like. But I can’t help myself after seeing the closing performance of Intel’s CES 2016 keynote.

Allow me a short rant then...

It annoys me when I see technology that ultimately detracts from the music. Whether it be touch-screens, gestures, or (insert gizmo X here), that end up being used in uncreative ways. Very annoying. Give me a guitar with 6 strings in order to make something that sounds nice. Or perhaps just get Imogen Heap performing with mi.mu gloves. There you go: technology and music with feeling. Job done.

But no. Instead Intel put genius composer and producer, A.R. Rahman, at the heart of a performance that made me cringe with embarrassment. I looked on in disbelief as a hesitant, stuttering performance began using gesture-based controllers which weren’t triggering when they were meant to. All the performers were sporting Intel Curie bands for gesture control. And judging by this performance I’m not rushing out to buy one! 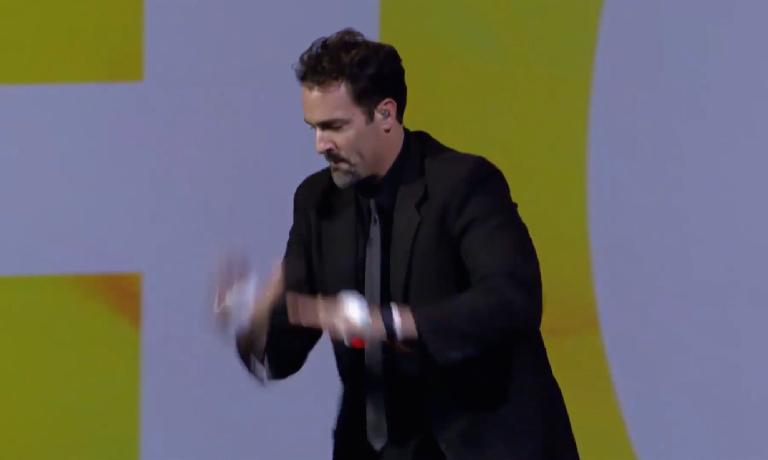 Drumming in thin air could be cool if the tech works well.

Oh, and the music itself, probably due to the latency and inaccurate triggering, or lack of, felt like a collection of sounds put together by someone trying out the technology for the first time. While it did eventually become more coordinated, perhaps this is a good example of technology interfering with music? When tech becomes an unnecessary addition and real, tangible instruments would have served the performers better.

Watch the Video of the performance on The Verge here.

I want to add that as musicians, producers, and technologists, we have a greater responsibility than simply showing off the latest wireless, internet of things, touch-less, 3D music controller. We need to make good music with tech. We need to make technology add something to our productions and performances that wouldn’t have been possible without it. We need tech to be a seamless part of the music, not something that stands out like a sore thumb, no matter how cool the concept is. And hopefully the performance itself can be inspiring and emotive.

Bring on NAMM 2016 where I’m confident music and technology will have a more seamless coming together!!