All Articles Recording & Production
Will Human Drummers Become Extinct for Live Performance?
G.W. Childs IV on Sun, September 21st 0 comments
Language
Technology is empowering musicians like never before. There are fewer barriers between going from studio to stage for a one-man band. But should we be dispensing with real drummers so easily?

With the ongoing rush of electronic instruments, plug-ins, software instruments and mobile devices, it’s easy to get caught up in this idea, and for good reason, that you can be a one man band. Everything being made for music, these days, really will do the job for you in terms of automating your show. And, while this sounds promising, walking up on stage, on your own, throwing out some sick beats, after pressing the ‘Start’ button, so humorously exposed during a recent Saturday Night Live skit, you just have to ask yourself a question... Does anyone really just want to see me, by myself, with my laptop, on stage?

Sure, this has been blown over many times, and this article is not here to make fun of this scenario. I, too, am a one man band, if I want to be. And, if I could give you one piece of advice that will serve you well, if you plan on performing live… get yourself a drummer.

Rhythm is a Dancer

One thing that I learned the hard way, in early sets of my own, was that regardless of what scene is going to see your shows, they are expecting a show. And, when I say ‘show’, I mean that an audience wants to be entertained both visually, and aurally. Sure, there was once a time in music history where it was just a little bit fascinating seeing one, or two guys on stage with keyboards and laptops. But, that’s been done many times over. 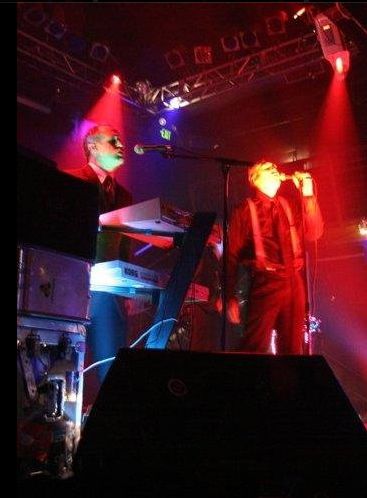 Notice the lights are very dark in this pic. Not much going on, on stage!

When you start a song, and a drummer is there, backing you up. There is another layer that’s added to the show that may be a little subtle to some, and huge to others. Either way, it’s an important element that gets overlooked-motion. 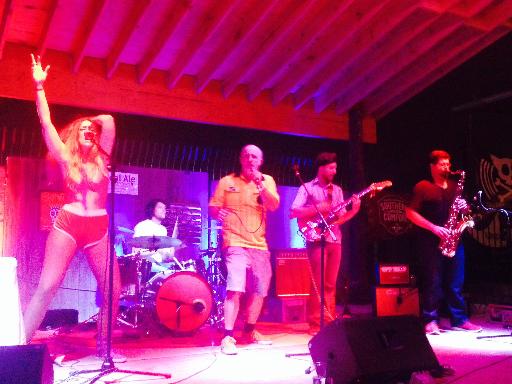 Doesn’t this look more exciting? Sure, the girl doesn’t hurt...

The other element that a drummer adds to the live performance is low-end, which you can never have enough of. And, even though the venue you may be playing out of might have a great set of house speakers, no speaker in the house (unless you’re playing an auditorium) will be able to consistently match the low end, and the sheer vibration that will be coming from that kick drum. For all intensive purposes, one might think of a drummer as your ‘Keep your eyes on the stage’ machine, as well as ‘Dance Motivator’.

Preparing for a Drummer

Working with a drummer, within a computer-based environment, where a lot of the music has been sequenced ahead of time is really a lot easier than people realize. The biggest hurdle to overcome is assisting the drummer in being able to hear the beat, so that he/she stays in time. Failure to do observe this step can lead you to some scenarios that I have experienced that you really don’t want to go through. Having a drummer play out of time destroys a performance.

The easiest way to help a drummer stay in time with you would be the age old, send a click track through, over headphones. There are many ways of doing this, and it generally depends on the DAW that you are using as to how this will take place.

My favorite method, which works in any DAW that has sends and returns (all of them?) is to set up a return track with an output set up to go directly to the drummers headset. Once you have the return track set up, then you’ll just send your click (be it either in form of a MIDI sequenced drum click, or a recording of a click), via Channel Send, over to your return track. You can also send some of the music, backing tracks, vocals, whatever you need. Though, I would encourage you to spend the time customizing this return track to the drummers needs.

This is where things can get tricky, as us laptop types don’t always tend to be the most social of chaps. Sure, Craigslist is a great place to meet anyone... Please don’t take that the wrong way! But, your local music scene is even better.

Let me describe one method of finding a really good, reliable drummer—go to live shows. Yes, I know this can be a drag! It’s hard being a musician and supporting live music. But, if you go out, and get to know the local bands playing, you start to get an idea of who is the strongest drummer in your area. In fact, you start to get a ranking, if you see enough shows. Why would you look at other bands, though?

Well, here’s one reason—the best drummers are always looking for challenges and generally want to play out as much as they can. As a drummer, the more your dance card is filled, the more money you are making and the more you learn, the more business you get... There are a lot of perks for playing more shows.

Another solid method for recruiting a good drummer, in my opinion, is Facebook. All it requires is a quick post: “Hey, anyone know a good drummer that lives in this area?” And, that’s all there is to it. I tend to prefer people referred by other friends, as they tend to be a little more reliable.

One Final Bit of Advice...

If you elect to work with a drummer, I would also suggest either getting rid of the drums coming from your computer. Or, shelving a little bit of the low-end off of your kick drum, so that the live kick drum has room to sit within the live mix. Sure, you may have a sick 808, with a really long tail. But, if it washes out your live drums, you may lose some of the live effect. I would suggest, first time, just playing with the EQ during your sound check, if you have time, to dial things in. Don’t assume that because you’re working with a ‘professional drummer’ that it’s going to sound good, right off the bat. Be prepared to tweak a little. And, try to have some fun. It’s great to collaborate!