All Articles Audio Software
Writing & Producing the Perfect Love Song
G.W. Childs IV on Sun, February 13th 1 comments
Language
It's almost that most 'loving' time of the year, and as musicians, we are uniquely poised to make the most of Valentine's day! Why? Because nothing woos the heart of a man, woman, or small animal like

It's almost that most 'loving' time of the year, and as musicians, we are uniquely poised to make the most of Valentine's day! Why? Because nothing woos the heart of a man, woman, or small animal like a love song! Think about it, for years and years, serenades performed under moonlit balconies, for all we know, have been the rites that most likely brought many of us in to conception.

In this tutorial, I'd like to help you do some conceiving of your own and give you a quick, and easy method for writing either a truly heartfelt love song in record time, or a truly convincing love song that might keep you warm at night.

So, before anything can be built, we need a foundation, right? Well, a love song's foundation is for the most part built upon lyrics, so before going in to all the technical hoopla, let's ask a few questions that may speed up the process.

Answer each of these questions now. Even if you aren't, necessarily sincere with the answer, jot down any answer! As you answer, make sure you answer in complete sentences. This is important because you'll need the opening statements in your lyrics to makes sense. These question will speed things up, because they basically help you to quickly and easily generate the 'what, where, and hows' that a love song requires. I'll do it right now, and you can see my answers.

She makes me feel like bread baking in the oven, about to have butter thrown on it.

When we're together I think of how much fun we have. Like every day is a day at the beach.

I often fantasize about the time that we stayed up talking about the world, and she kissed me on the cheek.

If we broke up I'd move away to India and cry for a year.

Okay, out of all of these answers, I have some ripe material for my lyrics. I'll use questions 1, 2 and 3 for the lyrics because they essentially state the status quo, my feelings, etc. Question 4 is more climactic than the rest of my answers, and states a fear, and possibly an end result. Also, it's the most miserable answer of them all, and you have to have a little misery in a love song, right?

Now, I'll take all my answers and write them down by themselves.

Verse 1
She makes me feel like bread baking in the oven, about to have butter thrown on it.
When we're together I think of how much fun we have. Like every day is a day at the beach.

Verse 2
I often fantasize about the time that we stayed up talking about the world, and she kissed me on the cheek.

Cross reference any of what's said in these lyrics with any country, pop, or R&B hit in the last several years, and you will know that these lyrics definitely hit the mark with any of the target fan base of either genre. Furthermore, these lyrics took almost no time to come up with, right? This is perfect because you want it finished by the time the flowers get there... Or are you just going to be cheap and use this?

With the core of the song taken care of, we can now start on the music. But, wait, we don't have any music! That's where this exercise is going to push your spontaneity envelope!

In any particular DAW, go ahead and create an audio track for your vocals. Next, set yourself up with a drum loop. Logic Pro has a plethora of stock loops to choose from, as well as Garageband. In fact, almost every DAW has some form of drum loop generator. Look around and see what you find. Myself, I'm going to choose Logic Pro!

I'm going to choose a tempo of 100 BPM. The reason I chose this speed is because 100 BPM tends to be a regular tempo for most sentimental tracks. I would suggest experimenting, as you may find that your lyrics may lend themselves to faster tempos, etc. Furthermore, I'll choose Ultrabeat for my rhythm device, as it has many, many different drum beats. For this particular exercise, I'll use the Broken Beat Kit, then I'll drag the first pattern out of Ultrabeat, in to the main Logic Sequencer. 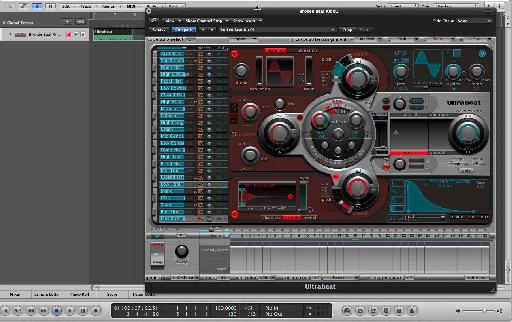 Once I've created several measures of the drumbeat looping, I'll just start singing the lyrics with the drum beat while recording. Feel free to do it several times until you get something you like... But don't think about it too much, right? 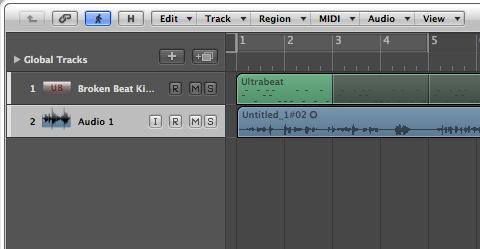 Obviously, there will be some pitch issues because you don't have any music accompanying your vocals, but don't worry about that, these are scratch vocals, you can always do other vocals later once you've got your music in. This is a skeleton remember! But in the meantime, yes, I'll be using Logic's lovely little Pitch Correction device. Thank you very much! 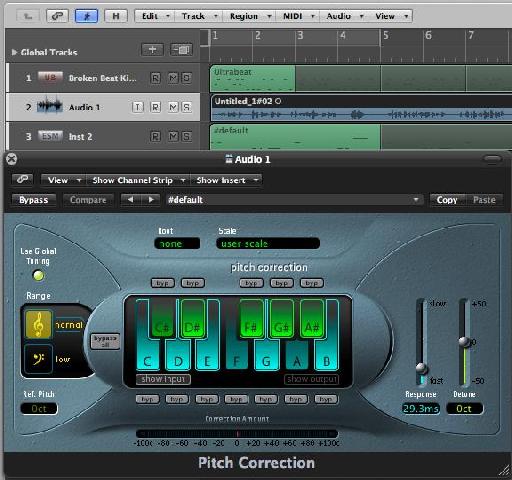 Now, that I have a couple of takes that are working for me of the verses, and chorus, I'll create another instrument track and use an ES-M for my bass synth. With the bass, it's just a matter of following along, and creating something that works with the flow of the vocals. 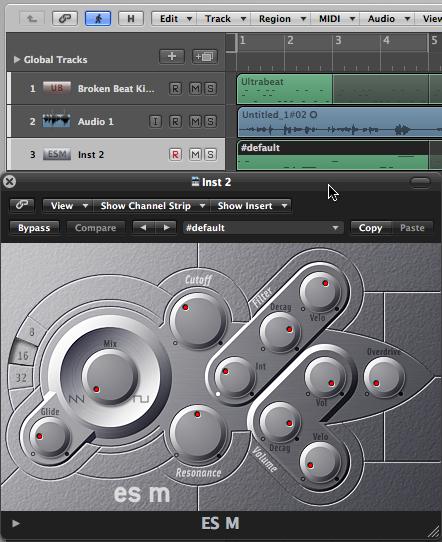 With the bass line here's the song so far:

From here on out, it's season to taste. Go ahead and add a pad, some FX here and there, maybe even some piano and various filler instruments to give the song life, and dimension. The main thing is out of the way though, the foundation of the song, and the lyrics. Having these elements in play already gets you out of the funk of sitting there working on one loop over and over again for hours, which is a common trap for many. Not to mention, a carefully written love song may make that Valentine's a little more special than usual... Right? Enjoy!