All Articles Logic Pro
10 Sequencing and Arranging Tips for Logic Pro X
Darren Burgos on Mon, January 19th 1 comments
Language
When you get down to the nitty gritty of sequencing your track or arranging your composition in Logic Pro X, it will help to know these 10 tips by producer and remixer, Darren Burgos.

Creating grooves in Logic couldn't be easier. Simply looping a 1-, 2-, 4- or 8-bar cycle and perfecting all the elements inside it comes natural to Logic. But when it's time to sequence/arrange an entire song, things are not quite so straightforward. In this article, I'll be showing you several tips on expanding your grooves and tracks into fully arranged songs.

Separate Each Drum Sound for Sequencing

When making drum patterns in Ultrabeat, NI Battery, Microtonic and others, it's pretty easy to separate each drum sound to new tracks for individual processing. But what about the pattern itself in the workspace? Wouldn't it be great to easily separate the kick, snare, hi-hat, toms, percussion, etc.? This is vital when arranging so you can choose when each sound plays. Select a region with multiple drum sounds within it like a MIDI-dragged Ultrabeat pattern. Click the workspace's local Edit menu, and from the Separate MIDI Events menu choose 'By Note Pitch.' Now all the individual sounds are on their own tracks. The top track is empty so you can delete it. Keep in mind when doing this that the additional tracks created are aliases of the one single channel strip. Try soloing or muting one and you'll notice that they ALL act together. If you want to mute or solo individual alias tracks, control-click one in the track list, and from the Track Header Components menu select 'Show On/Off.' There will now be a power button on every track you can use to turn individual tracks on or off, and you can name each track independently to easily identify them. 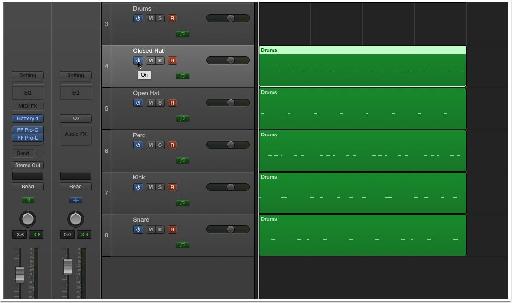 Use Marquee Tool to Arrange Loops

The Marquee tool in Logic is very versatile. While arranging/sequencing, it works great on looped sections. Simply select an area you want to remove and press the Delete key. It's smart enough to know what you're up to'¦ the loops before and after the area you delete are turned into real copies!

Turn a Single Loop Into a Real Copy

Ever want to turn a single loop into a real copy to independently edit? There's always Control-L'¦ I've mentioned this in a prior article. This turns all the loops into real copies. But what if you just want to edit a single loop, say for creating a drum fill? There's (not surprisingly) several ways to accomplish this, but in Logic X here's my suggestion for one that I feel is the quickest. First, click on the Logic menu and select 'General' under the Preferences menu. On the Editing tab, make sure that 'SmartLoop Handling of Scissors and Split by Playhead' is ticked. You can now simply use the good old scissor tool to cut loops as you would real copies. 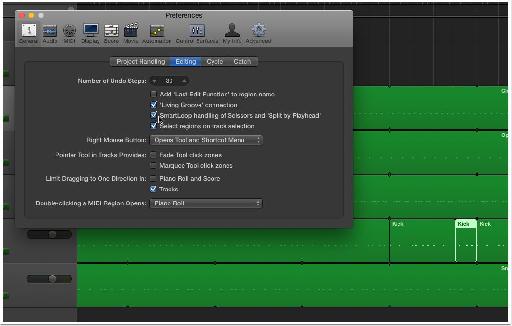 When arranging/sequencing, you'll often want to jump ahead to the various sections of your song like chorus, bridge/break, etc. Placing markers down for these sections and easily being able to jump to them is vital. Click the small button with the flag on it at the top of the Tracks list to show the marker track. Move the playhead/timeline to the start of a musical section in your song. Now press the small + button on the marker track. A marker is placed that can be named, moved, and colored. Place as many as you need for the various sections. Now use key command Option-, (Comma) and Option-. (Period) to move between them! 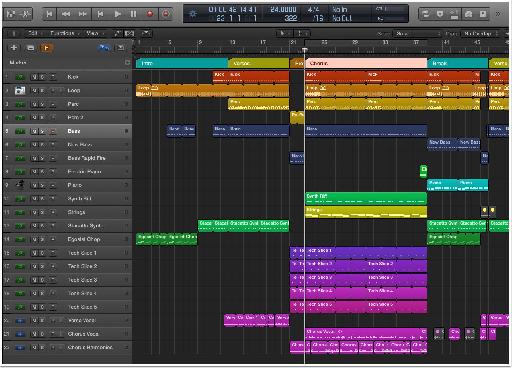 Often while sequencing, you might want to hear how your song will sound by skipping over a section entirely. That pre-chorus might not be working like you hoped it would? Skip it! Hold the Command key down while you swipe across the cycle area. The standard yellow cycle turns black with right pointing arrows. When the timeline reaches this Skip Cycle, it jumps to the end of it, bypassing the area entirely. 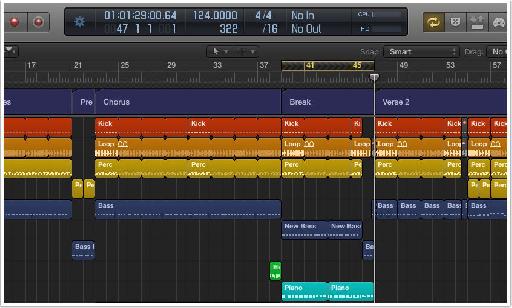 Manually copying, pasting, moving, and removing entire areas of your song in Logic can be a bit confusing at first. All the commands I show below are available as buttons in the Toolbar. However, learning these commands will help you to arrange quickly and with confidence. The first and simplest command is Repeat Section. Put a cycle around the area you want to repeat and use Control-Command-R. A copy of everything inside the cycle area is made, and placed directly after. This is a quick way to add length to your track as you build, add/remove various elements from the repeats.

The quickest way to copy a section (to paste elsewhere) is to use the Marquee tool to select the entire section, then press Command-C to copy it. To make it easier to select all element in a section, click on the workspace's local View menu and check off 'Marquee Ruler.' This adds a thin horizontal strip below the loop/cycle area where you can click and swipe across to marquee select everything within that area.

To cut/remove a section for inserting at another position, as before, put a cycle around the area you want to remove, then use Control-Command-X. When you do this, a window will appear with a warning message'¦ it's safe to ignore this whenever it comes up, simply press the Move button.

Now you can paste the cut section (to an empty area) with the standard Mac command Command-V by placing the timeline where you want the part to begin. You can also insert the section anywhere (between sections) with Control-Command-V. 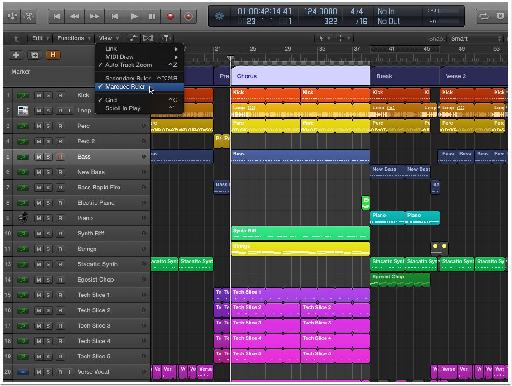 The dilemma with nearly every DAW regarding these sequencing/arranging commands, is what to do about elements that start earlier, or end outside of the musical section being cut/copied/moved/removed? Pick-up note(s) before a section? Forget about them, they won't be included. They're definitely not gone though'¦ you can easily open the clipped MIDI/audio region back up again by pulling on its left or right edge.

Create an Area of Silence Between Locators

So you've come to an area of your song where you'd like to insert silence for building a new part? Start a cycle at the point you want the silence to begin, and lengthen it to as long as you want the silence to last. Use Control-Command-Z, (choose Move on the dialog that may appear), the gap is created, and everything to the right is pushed forward as it should be. 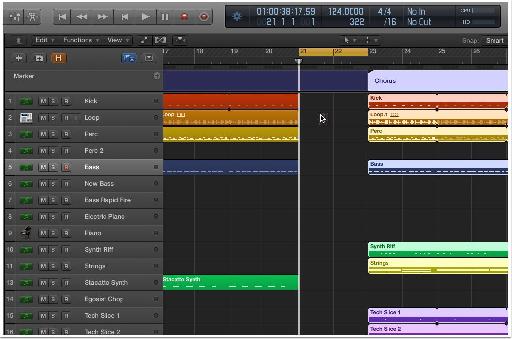 Staying organized while sequencing/arranging can be difficult. Organizing instruments into Folder Stacks can really help neaten things up. Drums sounds all over the place? Vocal tracks scattered everywhere? Shift-click all the related tracks first, then from the Track menu, select 'Create Track Stack' (or press Shift-Command-D).  Choose 'Folder Stack' from menu that appears, then click the create button. All the selected tracks will now be in a single expandable track. Double click the folder stack to name it. No worries when using the arranging commands from Tip 6 above '¦all the individual tracks inside will move as expected. 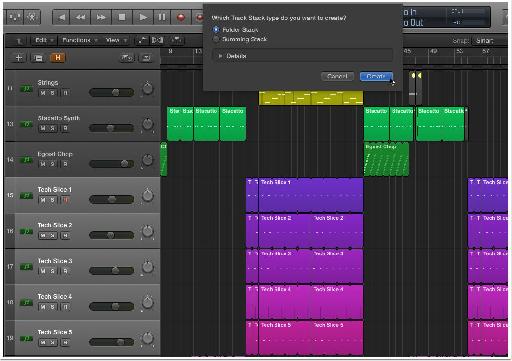 Use Alternatives for Different Arrangements 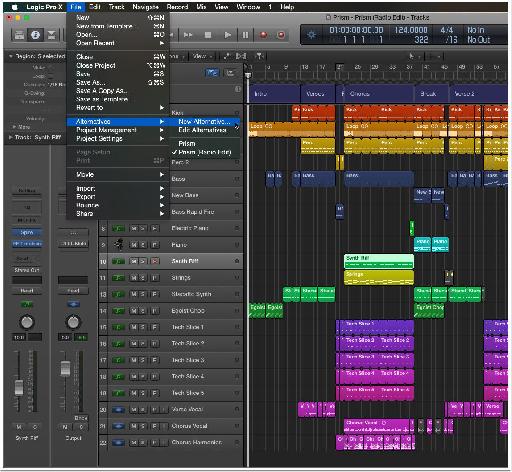 Once your song is well defined, Logic X's new Arrangement Track is fantastic for quick re-arrangements (like radio edits). Press the G key on your Mac's keyboard to open Global Tracks. By default you should see the 'Arrangement' track, but if it's not there, Control-click on any global track and choose 'Show Arrangement.' Click the small plus button on the right side of the Arrangement track to create your first section. It defaults to an intro section, but you can click on its name and change it to either a selection of choices, or give it a custom name. If you already placed markers in the song (like I did in the image below) you'll know what to name them. You can easily adjust the length of the arrangement marker by clicking and pulling on the sides. Continue to create arrangement markers for the various sections of your song. Once they're placed, you can drag them around anywhere to move everything in that section. By holding the Option key down while dragging you can even copy complete sections anywhere you like (even in-between sections). Everything to the right of where you place the section/marker will move forward in time to accommodate it (including the automation).

Darren Burgos
Darren started making music on computers when he was a teenager in 1987. His first computer was an Amiga, and when he realized the power of computer-based production, his addiction for making electronic music began. Darren switched to Mac in 1994 and started using Logic Pro. He's been involved in many music projects over the years including Psychoid. For two years Darren travelled with Apple showing Logic Pro to visitors of Macworld, NAMM, Remix Hotel and NAB. Currently, he teaches a class in L.A. on electronic music production using Logic for Logic Pro Help. Darren also runs two small businesses on Mixing, Mastering and Logic Pro training and support.
Related Videos
Comments (1)

Dream It. Do It.
Do you want to learn Producing Hip Hop?
Yes, I want to learn!
No Thanks, I just want to read the article.
Feedback
How are we doing?
We'd love your thoughts, feedback and questions regarding our new site. All feedback is appreciated!
We do not respond to this form! If you need support, please visit our support page.
Thank you for your input!
Your message has been successfully sent
Course Advisor
Don't Know Where To Start?
Ask A Course Advisor