All Articles Logic Pro
6 Logic Pro X 10.4 Workflows & Features You Might Not Know
Joe Albano on Sun, March 4th 2 comments
The 10.4 update to Logic Pro X brought a whole raft of features, tweaks and upgrades. Here, Joe Albano shares six new tools and techniques that might have escaped your attention.

Logic 10.4 brings a host of new features and bugfixes that have rightfully gotten a lot of press, but there are also a number of smaller additions and helpful workflow enhancements that may be flying under the radar, overshadowed by major features like Smart Tempo and new instrument and effect plug-ins. Here are 6 new features and small additions or changes in Logic 10.4 that could easily be missed.

In previous versions of Logic, Automation data and MIDI controller data were treated separately, with the Automation offering a choice of Track-based or Region-based automation, accessed and edited via the Automation display in the Tracks area, and the MIDI control data, edited via the MIDI Draw display in various windows. Logic 10.4 consolidates handling of Automation metadata and MIDI controller data, offering this consolidated access in both the Tracks area as well as the Audio Track Editor, and the Piano Roll as well as the Score Editor.

In the Tracks area—depending on Track type and type of Automation (Track or Region), the display/edit option includes both Automation (Fader events) metadata and MIDI controller data. This utilizes the Automation display for MIDI controller data in the Tracks area—the existing MIDI Draw display option there is gone. In the Piano Roll it’s now possible to also edit Automation data as well as MIDI data—especially useful if certain Automation data are used as part of a musical performance as opposed to part of a mix. However, the previous limit of only one type of Automation/MIDI data at a time in the Piano Roll is still there. Perhaps a future update will add multiple-lane capability there? Apple? 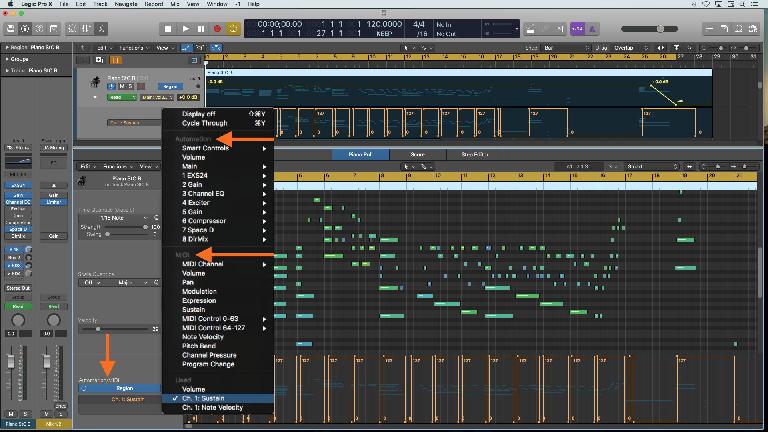 Automation data in the Tracks area and the Piano Roll Editor

There are options for selecting the Automation/MIDI data either manually or automatically, and various additional drawing and editing options have also been implemented—while the basic functionality is pretty straightforward once you get used to it, it’s worth a more in-depth look at the details, to help get the most out of this new implementation.

10.4 includes major changes to the handling of Articulation IDs, Logic’s proprietary method of using metadata added to individual notes to control current articulations in layered instruments without the need for chasing additional note or controller data in MIDI/Instrument Regions. The new Articulation Editor lets you set up Track-based Articulation Sets that can not only be tailored to specific Instruments, but also work with third-party articulated instruments, allowing them to take advantage of the note-based Logic Articulation metadata, which can be mapped to each Instrument’s own method of triggering different articulations. This is a significant feature, and has been widely noted.

One of the major improvements in the new Articulation handling is its primary use of keyswitching to control the articulations. Keyswitches—lower notes on a full-size keyboard, below the usual instrument ranges—have become the industry-standard approach for selecting articulations, but Logic’s previous Articulation ID implementation didn’t allow for easily selecting articulations in realtime, during performance, with the use of keyswitches. The new implementation makes this a piece of cake, once you know how to enable it.

In the Smart  Controls pane, there’s a new sub-pane named Keyswitches. This displays a keyboard (one octave at a time) with the specific keyswitch functions for the selected instrument labelled—this keyboard is mouse-clickable and can be used to switch articulations on-the-fly. Now, it was always possible to do this with switches in the Smart Controls pane, but there’s now also a switch labelled MIDI Remote, which activates live keyboard input, enabling the performer to switch articulations while recording the musical part. The notes are tagged with the appropriate Articulation IDs, and playback will track the recorded articulations, which of course can also be edited after-the-fact, and more conveniently than before. 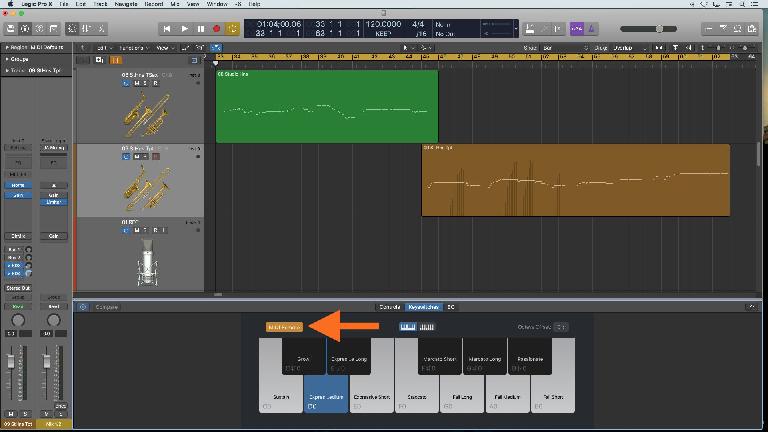 The MIDI Remote option for live keyswitching of articulations

This MIDI Remote live keyswitch activation can also be switched on or off in other locations as well (Articulation Set Editor, MIDI Preferences), and its status can be set Globally or Per Channel Strip, since some instruments might need to utilize those low notes for musical performance—piano, basses, etc. One thing to note—the Track-based Articulation sets that implement the keyswitching options are automatically loaded when you select a Logic Patch, but if you load an Instrument elsewhere (from a Channel Strip or Settings menu), you’ll have to select the appropriate Articulation set yourself in the Track Inspector; the sets are not stored with those older preset formats.

A more specific new feature is support for Melodyne’s ARA feature. Of course this is only of interest to those who use Melodyne’s time/pitch-editing plug-ins, perhaps for their unique polyphonic pitch editing feature (still absent in Logic’s Flex and all other DAWs’ editors). The ARA (Audio Random Access) feature integrates Melodyne’s audio editing plug-ins more seamlessly into a DAW. Without it, any audio to be pitch/time-edited in a Melodyne plug-in has to be “captured” first into a dedicated new parallel file to allow for the editing; this is a time-wasting inconvenience, especially when a lot of quick edits may be needed.

ARA allows for Melodyne editing of audio without this time-wasting step, making editing with Melodyne plug-ins almost as seamless as working in Logic’s own Flex editor. One caveat—as of this moment, while Logic 10.4 supports the feature, Melodyne itself still doesn’t have the implementation ready on their side! However, they promise ARA-compatible versions soon—perhaps by the time this article is published those will already be available.

Some smaller enhancements have been made to existing plug-ins. Besides the obvious graphic makeover of Space Designer, the Direction Mixer has also gotten a new look, along with an additional feature. Direction Mixer used to be the only way to implement proper true stereo panning in Logic, but with the recent introduction of the true stereo panning option to the Logic Channel Strip panner, the main feature of Direction Mixer was rendered somewhat obsolete. Perhaps to give it a little more utility (in addition to its presence for the sake of legacy Projects) a new feature has been added—the ability to split the frequency range into high and low frequencies and apply its panning/imaging capabilities independently to the highs and lows. 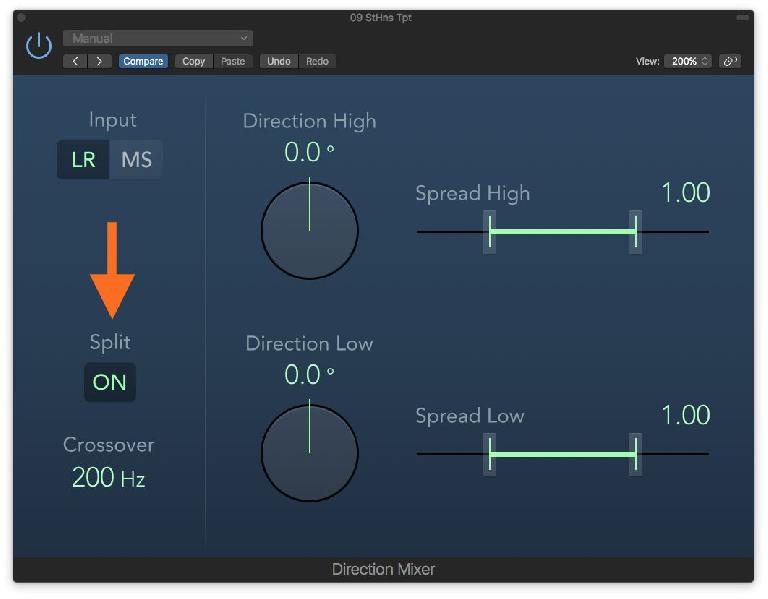 This could be useful in certain situations—for example, it’s a common mastering technique when prepping for a vinyl release (newly popular again these days) to narrow the stereo width of the low-frequency range to minimize potential tracking problems without compromising the overall width of the stereo image. This is usually done via MS (Mid-Side) processing techniques (also possible here) or more elaborate splitting and routing of the stereo track, but it could be done much more simply with the new Direction Mixer frequency split feature, without having to set up more elaborate editing.

This new mode was no doubt developed as part of the new Vintage EQ’s emulation of the API 560 Graphic EQ. API’s EQs are known for utilizing a proportional-Q design, which would certainly have been modeled for this plug-in; adding the option to the Channel EQ is a nice enhancement to that more general-purpose EQ. 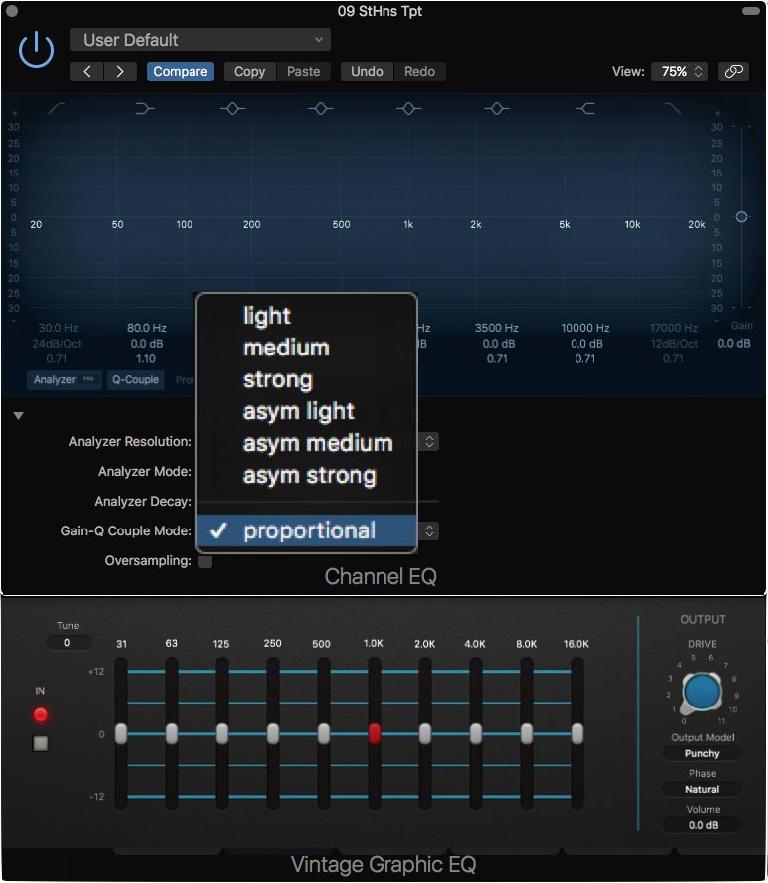 The Key Commands window has also had a makeover. Besides a number of graphics changes, there are additional features and display options. 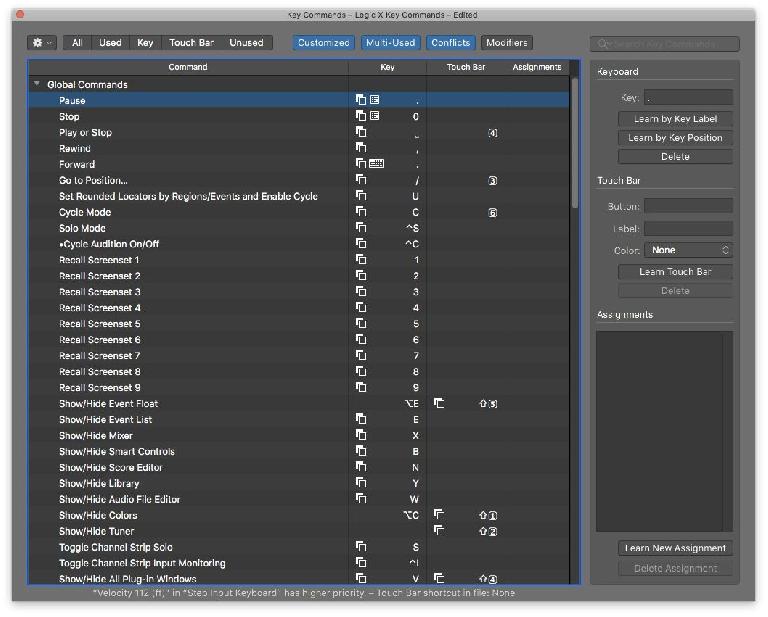 There are now dedicated options for viewing Customized Key Commands (KCs), KCs that are used for multiple functions in different windows, and KC Conflicts. KCs that have been changed from the current default set are displayed in the Customized list; conveniently the previous (default) command assignment is also shown. The Multi-Used display shows KCs that have different functions in different windows, along with their window-based priority assignments. If a KC might have a conflict with, say, a macOS KC, the Conflicts list will show this.

Useful information about the selected KC is displayed at the bottom of the window, and various other improvements, like to the Search feature, make setting up Key Commands a bit easier and more efficient.

There are certainly many more small but useful changes  in  Logic 10.4—these are only a few that caught my eye. It’s worth a little time spent reading through that long list of features and fixes in the 10.4 Release Notes as you may come across something that significantly enhances your specific workflow, and makes your life with Logic just that much easier.

Learn Logic Pro X 10.4 inside out in our video courses: https://ask.audio/academy?nleloc=category/audio/application/logic
Related